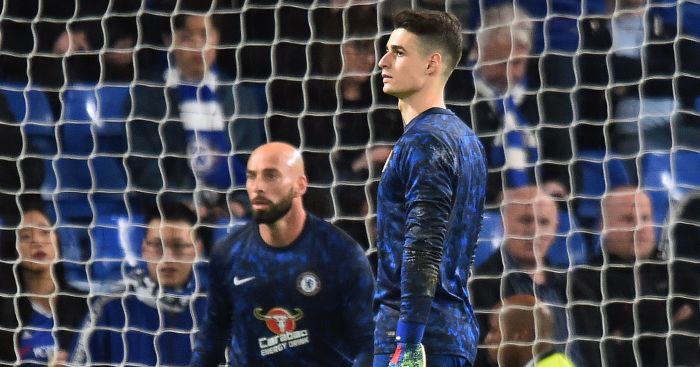 Willy Caballero hailed Kepa for supporting him despite taking his place in the starting line-up as Chelsea overcame Tottenham on Wednesday at Stamford Bridge.

The 4-3 penalty shootout loss in Sunday’s League Cup final was overshadowed by Kepa’s refusal to be substituted, resulting in the world’s most expensive goalkeeper dropping to the bench in their 2-0 win over Spurs.

Kepa defied his manager’s orders late in extra time after receiving treatment for an apparent bout of cramp, despite the fourth official putting up his number on the board and Caballero being primed to come on.

The goalkeeper and Sarri insisted it was a misunderstanding, but the club announced the 24-year-old would be fined one week’s wage.

Caballero took his place and kept a clean sheet in the London derby against Spurs and the Argentinian praised Kepa’s attitude to being dropped.

Caballero told BT Sport: “The very good news is that he doesn’t care what happened.

“We are ready and Kepa was fantastic today in supporting me.

“He learns, we learn, and I thank him for supporting me.”

After the match, Sarri added: “I think it was the right decision.

“Kepa made a big mistake, he paid with the club and then he had to pay with the team. Now I think we have to stop. Kepa from tomorrow will be with us.”