Home All The News Cahill: It was ‘my duty’ to win WC play-off 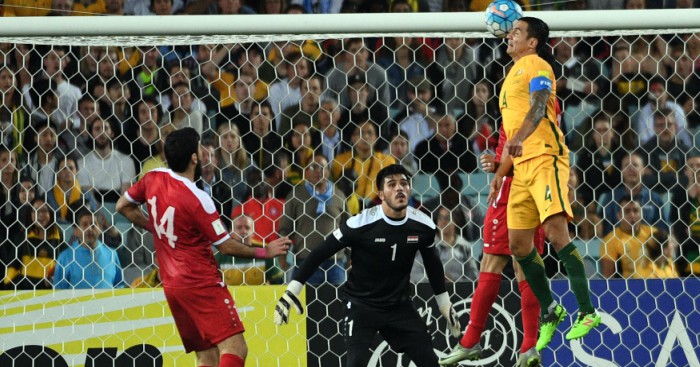 Australia’s veteran match-winner Tim Cahill felt it was his responsibility to take control of their destiny in the 2-1 World Cup qualifying play-off win over Syria.

The midfielder-cum-striker turns 38 in December but rolled back the years with two trademark headers at either end of a game which went to extra time to end Syria’s dreams of a World Cup debut.

Omar Al Soma had put Syria ahead at the ANZ Stadium in Sydney, giving them a 2-1 aggregate lead, only for Cahill to strike twice to keep the Socceroos on course for next year’s tournament in Russia with a final play-off to come against Panama or Honduras.

“You’ve got to write your own script. I said to Tommy Rogic if you don’t take your moment then I’m going to take it,” Cahill said in his post-match interview.

“It’s a responsibility when I play. This is my passion. I will run to the end for this manager and these players.

“I’m proud of everything we have done together and how we can help kids watching to follow their dreams.”

Cahill was already the country’s all-time leading scorer but his vital second goal was his 50th for his country.

“I said when he broke the 100 games that he’s a great Australian sportsman, beyond our sport,” he told Fox Sports.

“He’s got an international record that will stack up against the best in the world, and he keeps doing it.

“I can’t remember the last time he played 90 minutes and he’s gone out there and played 120 minutes. He’s got something about him for sure.

“You know these games throw up pressure and you’re looking for people who have been through it before and know what it takes…(Cahill) was at the forefront of that.”

Syria coach Ayman Hakeem had nothing but praise for his team.

“I was very proud of our players. We need to thank the Syrian supporters who turned out to support the national team,” he said.