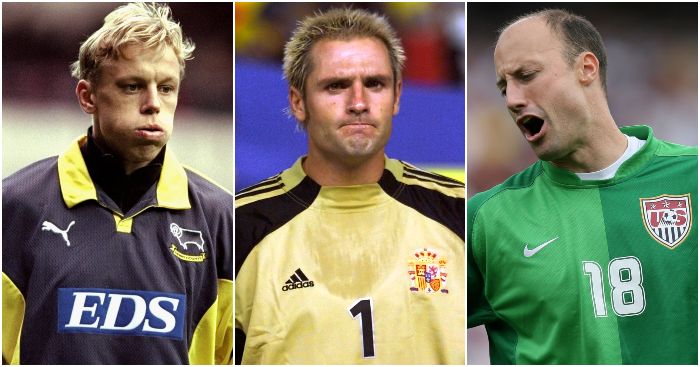 Adrian has become the latest goalkeeper to be struck down by a bizarre injury. It can’t be a coincidence that it’s usually keepers who hurt themselves in the most ridiculous ways?

Alex Stepney
Peter Schmeichel nearly had his jaw dislocated because of his mouth, but Roy Keane gave him a black eye instead. Another European Cup-winning former Manchester United keeper inflicted the damage upon himself during a game at Birmingham in 1975…

Stepney’s jaw dislocated while he was barking out his orders to the United defence. The once-capped England keeper, who spent 12 years at Old Trafford, had to disappear to hospital while Brian Greenhoff took the gloves – if indeed Stepney was wearing any. Greenhoff kept the clean sheet and United won 2-0 thanks to a brace from Sammy McIlroy.

Chic Brodie
The Brentford Hall of Fame goalkeeper effectively had his career ended after being clattered by a dog during a league match at Colchester in November 1970. “The dog may have been small, but it just happened to be solid,” said Brodie after the subsequent knee injury eventually forced him into retirement, despite attempting a comeback later in the same season.

Where was the ref? The pooch was on the pitch for long enough to be spotted – it was hardly inconspicuous. It chased the ball from one end of the pitch to the other. Did the officials intend simply to play on while the terrier tore around? Presumably the fella who played the back pass under little pressure from anyone other than the mutt was more of a cat person too.

Chic Brodie getting taken out by a pitch invading dog in a game between Colchester United and Brentford pic.twitter.com/VluKiUdxr6

Kasey Keller
Many footballers enjoy a round of golf when off duty. Indeed, it seems Gareth Bale enjoys golf more than football. But it’s not always the serene, harmless pastime you might think. Swansea’s Alan Tate broke his leg when his cart collided with a tree in 2011, while Tottenham Double winner John White was killed on the course by lightning in 1967. If you’d not heard of White’s tragic tale, this is worth your time.

Anyway… keeping it light… former Spurs keeper Keller’s injury was self-inflicted. The USA star knocked his front teeth out while removing his clubs from the boot of his car. As you do.

David James
The former England keeper once put his poor form for Liverpool down to his video game addiction, revealing after conceding three at Newcastle that he’d stayed up late playing Tekken and Tomb Raider.

He also pulled a muscle in his back once while reaching for the remote control, while the keen angler also tweaked a shoulder muscle while landing a huge carp.

Michael Stensgaard
The Denmark Under-21 keeper – the next Peter Schmeichel, apparently – signed for Liverpool in 1994 to press David James and Bruce Grobbelaar. But Stensgaard had bigger problems pressing his shirts.

Soon after moving to Anfield, Liverpool’s new No.13 dislocated his shoulder while attempting to fold down an ironing board. He never full recovered and his contract was terminated when he took early retirement. Stensgaard later tried to return and played a few games for Copenhagen before moving to Southampton. But again he never played a game in England and retired once again with a back injury.

Santiago Canizares
Spain first-choice keeper missed the 2002 World Cup after smashing a bottle of aftershave in his bathroom at the team’s training camp, with a shard of glass severing a tendon in his big toe.

“I do not consider myself to be unlucky by any means,” the sweet-smelling 32-year-old Valencia stopper said at the time. “It was a terrible piece of bad luck for Canizares and I am certainly not happy,” added Iker Casillas, presumably stifling giggles.

Dave Beasant
The former Wimbledon, Newcastle and Chelsea has become almost as famous for smashing a jar of salad cream on his foot as he is for being the first keeper to save a penalty in the FA Cup final when he denied John Aldridge and Liverpool in 1988.

Beasant’s misfortune came during pre-season in 1993, shortly after Glenn Hoddle had just taken over at Chelsea. When a 2kg jar of salad cream (big Dave buys in bulk) dropped from a shelf, the twice-capped England keeper saw an opportunity to test his control. So tight was his first touch that a shard of glass cut through his skin, severing tendons in his big toe. He was out for eight weeks and never played for Chelsea again.

Richard Wright
The £3.5million Everton keeper had only just recovered from a knee operation when he returned from holiday and dilligently returned his suitcases to his loft. But not dilligently enough because the former Ipswich and Arsenal custodian fell off the ladder and landed on his shoulder, keeping him on the sidelines for much of pre-season.

“I’m not superstitious but the accident was on Friday the 13th and I am going to be careful now what I do on certain dates,” said Wright afterwards. He’s also very wary of Wednesday the 8th after twisting his ankle on a ‘keep out of the goalmouth’ sign while warming up in the goalmouth.

Richard Wright and the no ball games sign.https://t.co/kayEwrXlLm

Andy Dibble
There was nothing self-inflicted about the injury suffered in 1998 by Dibble, who had 21 different spells with 18 different clubs during his career. But it did not follow the route he plotted after he was scarred for life by pitch markings drawn with hydrated lime while playing for Barry Town.

Dibble received skin grafts after a four-inch wide strip of skin had been burnt off from his shoulder to his hip. Carmarthen Town Council coughed up £20,000 in damages after the keeper’s solicitor claimed in court that the injury had ruined his hopes of moving to America: “It would have been a very lucrative move for him. Instead he had to stay in this country and scrabble around for a club when he recovered in 1999.”

Mart Poom
The scorer of one of the greatest headers of all time bruised his schlong while playing up front against Iron Maiden. Read that again, we’ll wait.

Yes, in the summer of 2000 before a gig in Tallinn, Poom lined up as a striker in a charity game against the heavy metal band. Apparently, he collided with the opposition keeper, taking one in the nuts in the process. Insert your own knob joke here.

13 years ago Mart Poom rose like a salmon to score THAT header v ex club Derby County​. Let's enjoy it once again… pic.twitter.com/If6HYNYH4K