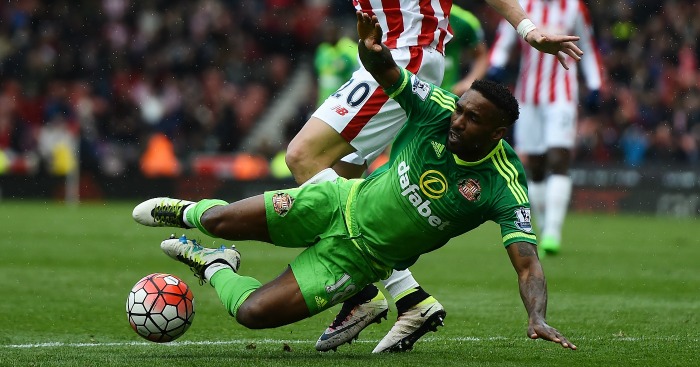 Stoke defender Geoff Cameron has accused Jermain Defoe of diving to win the penalty that earned Sunderland a point at the Britannia Stadium on Saturday.

The Potters were leading 1-0 in injury time when Defoe tumbled under a challenge from Cameron and referee Craig Pawson pointed to the spot.

The former England striker calmly converted the penalty to give the Black Cats a major boost in their fight against relegation.

Cameron said: “I’m disappointed with the decision at the end. I gave the referee the opportunity to make the call but, having a good look at the replay, I didn’t actually touch him.

“From a different angle, it’s kind of got him going down early and looking for it. But from the ref’s angle it looks like I kicked out.

“It was a spur of the moment thing, I didn’t want him to turn but I didn’t touch him. All of a sudden, he goes down. He’s a clever, veteran player, he knows what he’s doing. They got away with it.

“I know from a personal stand point that if I go through a guy I’ll hold my hand up. So, for me, it’s difficult to take.”

Defoe shrugged off Cameron’s comments, saying: “Well if there was no contact, I would have turned and scored.

“He’s going to say that. I don’t expect him to say, ‘Yeah, it was a foul’. The fact of the matter is that we got the penalty and I scored.”

The point was not enough to keep Sunderland out of the bottom three after Newcastle beat Crystal Palace to climb above their North East rivals.

But Sunderland have a game in hand, and victories over Chelsea, Everton and Watford would definitely be enough to keep them in the Premier League.

It is the fourth consecutive season that the Black Cats have found themselves battling to avoid the drop, and Defoe believes that will stand them in good stead.

The striker said: “We’ve got two absolutely massive games coming up now, but that’s why you play football. You want moments like this, and we back ourselves to get the results we need at home.

“The performances have been good, although there have been times when we’ve found it a bit hard to score at home. Hopefully, we can change that at the weekend. They’re massive games now – games that we need to win.