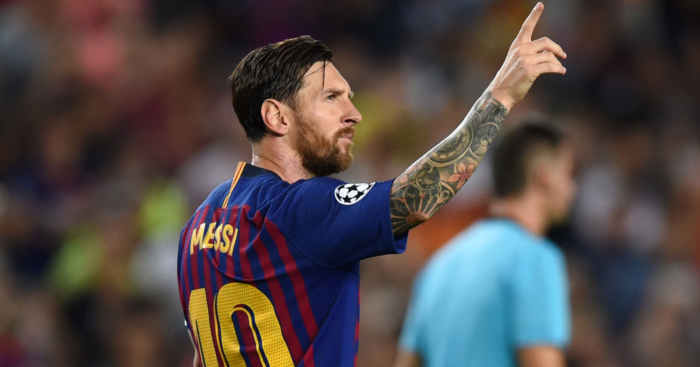 After an enthralling weekend of football before the international break, complete with late winners, upsets, five red cards and 33 goals, La Liga resumes on Friday hoping to pick up where it left off.

There’s certainly plenty of scope for another entertaining weekend. Resurgent Real Madrid visit the Basque Country for a potentially tricky tie with Eibar, while Sevilla host overachievers Real Valladolid with a view to going top. There’s a Catalan derby between Espanyol and Girona, Celta de Vigo face Real Sociedad in their first match under new manager Miguel Cardoso, and Villarreal v Real Betis has the potential to be a cracker.

But there’s one fixture that jumps out above all others – Barcelona’s visit to Atlético Madrid on Saturday night.

A fixture between last season’s champions and runners-up shouldn’t need any extra hype, but there’s something about both clubs’ current situation that makes it all the more intriguing.

Barcelona are top, and Atlético are third. On paper, all appears well. It seems counterintuitive given their league positions, but both sides are struggling, and have had poor starts to the season by their own lofty standards.

Barcelona are leading almost by default. If it weren’t for an unexpectedly awful start from Real Madrid, they would have been playing catch-up already, having taken just 24 points from the 36 on offer.

A season in which Barcelona and Real Madrid both struggle is as rare as a winter swallow, and one would expect Atlético to profit from the failure of the traditional top two.

So far, they have failed. They may be three points ahead of Real Madrid and just a point behind leaders Barcelona, and have only suffered a single defeat, but a whopping five draws have prevented them from taking advantage of their rivals’ weakness and building an early La Liga lead.

On Saturday night at the Wanda, they have the opportunity to turn the tide in their favour.

It will be far from easy, though. They have their fair share of injury problems, and are likely to be without a raft of first-team players, including Thomas Lemar, Diego Godín, Koke Resurrección, Lucas Hernández and Josema Giménez.

Atleti’s strength has always been in defence, and they have kept the tightest ship in the league so far this season, conceding just eight goals. The problem? Their opponents have scored 34 times in the league, ten more than any other team. Lionel Messi and co will be faced with the toughest defence they have encountered so far, but Atleti’s defence are yet to face such a formidable attacking unit.

It will be interesting to see what happens when an unstoppable force meets an immovable object.

The good news for Atleti is that Diego Costa is fit again to return to the front line alongside Antoine Griezmann. Although Atleti’s attack hasn’t exactly been firing on all cylinders this season, with just three of their 16 goals scored by strikers (incidentally all Griezmann), they will surely fancy their chances of scoring against the weakest Barcelona defence in years.

Barça will have defender Samuel Umtiti available again after injury, but he will be lacking match fitness. Centre-backs Gerard Piqué and Clément Lenglet have struggled for form in Umtiti’s absence, and Barça have leaked 18 goals this season, compared to just four at the same stage last season.

It will be equally interesting to see what happens when a stoppable force meets a moveable object.

History certainly seems to favour Barcelona. Atlético have never beaten Barcelona in the league since Diego Simeone took charge of the side in December 2011, losing nine times and drawing four in 13 attempts.

The flipside of that stat is that Simeone has only ever lost once against Barcelona manager Ernesto Valverde, winning eight of their 13 encounters.

Although most of those wins came when Valverde was in charge at Valencia and Athletic Club, undoubtedly weaker sides than Barcelona, it is still a significant psychological advantage to hold, and suggests that Simeone knows a thing or two about how to exploit the weaknesses of a Valverde side.

The catch is that this particular Valverde side includes a certain Lionel Messi. Simeone’s biggest challenge will be to try and nullify the threat posed by Messi without allowing his fellow forwards too much freedom. If he finds a way to do this, his counter-attacking style will probably be able to exploit the poor form of Piqué and Umtiti’s lack of match fitness.

Simeone will take inspiration from the fact that the likes of Leganés and Betis have beaten Barça already this season. It seems that they are more beatable now than at any time since before the Pep Guardiola era.

Atlético may have injury problems and misfiring strikers, but Simeone will still see this as his best ever opportunity to record his first victory over the Catalan side. If he manages to do so, he will remove that particularly burdensome monkey from his back, and move his side into pole position in this season’s title race. It’s an opportunity he can’t pass up.