Home F365 Says Can Conte force a changing of the guard in Italy? 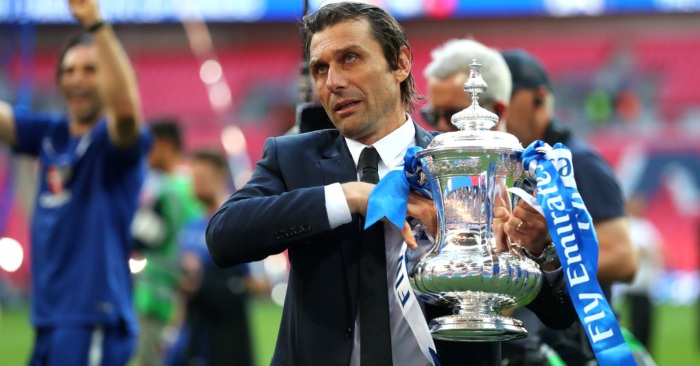 In Italian football, there is a rather unique juxtaposition that does not really get enough coverage. Rivalry is huge, running right through its core; whether in Milan between Inter and AC Milan, in Rome between Roma and Lazio, or in Genoa between the city’s namesake team and Sampdoria, there are many regional feuds, but right across the country, competition is rife. Juventus, 35-time Serie A champions, perhaps understandably have to deal with much enmity from different directions, whether it is from Napoli, Florentina or Inter. Curiously though, for all the divides in calcio, there aren’t many who fear treading across them.

This summer alone has seen two managerial appointments that would be unthinkable almost anywhere else – legendary former Juventus player and coach Antonio Conte has taken the reigns at Inter, while just this week the man who led Napoli to a record points total of 91 points in Serie A in 2017/18 has left Chelsea to replace Max Allegri in Turin. These two moves could be about to end the status quo in Italy; the fires have certainly been stoked.

To understand the magnitude of Conte’s switch to the Nerazzurri, imagine Paul Scholes or Ryan Giggs taking the reins at Liverpool, or Steven Gerrard replacing Ole Gunnar Solskjaer at Manchester United. After 13 years marshalling the Bianconeri midfield and a further three dominating Serie A from the dugout, Conte will be plotting their downfall with a bitter opponent. Putting the subplots to one side, though, it could be the definitive change Inter need to challenge for the title for the first time since winning it under Jose Mourinho in 2010.

In simplistic terms, this is because he is an elite coach, one of the very best, and he will be backed by money that nobody – including Mourinho and his successor Rafael Benitez – has seen at San Siro. Looking across at Juve, too, will give them hope; Allegri, the man who evolved Conte’s philosophy to maintain his dominance after taking over in 2014, has gone and the champions are truly gambling with his replacement. Maurizio Sarri is an innovator, a revolutionist and a complete contrast to both Allegri and Conte, playing high-intensity attacking football; as we have seen at Chelsea, that is not easy to implement overnight.

Sarri never played professionally but is famed more for his style of play than his success. Despite winning the Europa League at Chelsea last season, he clearly jarred with the ideals at Stamford Bridge. Given Juventus bought Cristiano Ronaldo, now 34 years old, last summer to win the Champions League, instant gratification is as much of an issue in northern Italy as it proved in west London. Sarri needs time, understanding and backing, but if he doesn’t hit the ground running, there could be quite the identity crisis in Turin. Having finished 11 points ahead of Carlo Ancelotti’s Napoli last season, and 21 ahead of Inter who finished fourth and qualified for the Champions League, Juve will believe the gap to the rest of the league will give them time for transition, but Conte – and Ancelotti for that matter – should sense a real opportunity.

These Serie A managers will have a lot to talk about next season. 🔵 pic.twitter.com/PO1Cs2cr6d

Conte is a volatile character at his worst, but a superb motivator at his best. He will demand everything from his players, but his more pragmatic style is much easier and more transferable than Sarri’s. There are issues for him to iron out, most notably juggling the boiling pot that is former Inter captain Mauro Icardi, who hasn’t always been universally popular with his own fans and teammates. Conte’s handling of Diego Costa at Chelsea would suggest problems are on the horizon there, but reports suggesting he is targeting a move for Manchester United striker Romelu Lukaku – the man he wanted to replace Costa after his Premier League title win in 2017 before settling for the misfiring Alvaro Morata – suggest he is dealing with that issue at source. Icardi certainly won’t be short of suitors should he become formally available.

Where somebody like Ivan Perisic, the Croatian winger once heavily linked with a move to Old Trafford, fits in will also be a huge question for Conte to answer; as he showed in England, he preferred to play with three central defenders and wing-backs to free up two attacking players behind a sole striker. Perisic is something of an endangered species in that he likes to play on the touchline rather than cut inside, and it is tough to see him adapting. But this situation would appear much easier to overcome than what Sarri could have on his plate at Juve – not only with Ronaldo, but if they re-sign Paul Pogba from United. The Frenchman was such a huge part of the Conte and Allegri years, but his desire to play with intensity – the exact trait needed if he were to succeed under Sarri – has been questioned at Old Trafford.

It should be said that Conte will face some early stylistic problems while stepping into the shoes of Luciano Spalletti (who preferred to play on the front foot more than the counter-attack) but Inter have supposedly been chasing their man for quite some time. Now they have him, they’ll need to keep him happy; having endured years of watching a rival build a seemingly unbreakable dynasty, backing him seems the only sensible option. Meanwhile, Sarri may face resistance as he takes Juventus in a completely new direction – juggling star names and new signings that don’t fit his style won’t be an excuse if he does not hit the ground running. They can f*** Sarriball in Turin too.

While Sarri may incur the wrath of Napoli fans on his San Paolo return and the Derby d’Italia has been made much more interesting as Conte looks to restore Inter’s greatness, these moves have made next season in Serie A a mouthwatering prospect. And it’s been a while since we have been saying that in June. Conte should not be expected to overthrow his former club straight away, but all the ingredients are there for an eventual changing of the guard in Italy.