Home Mediawatch CAN FOOTBALL SINK ANY LOWER? Oh do f*** off… 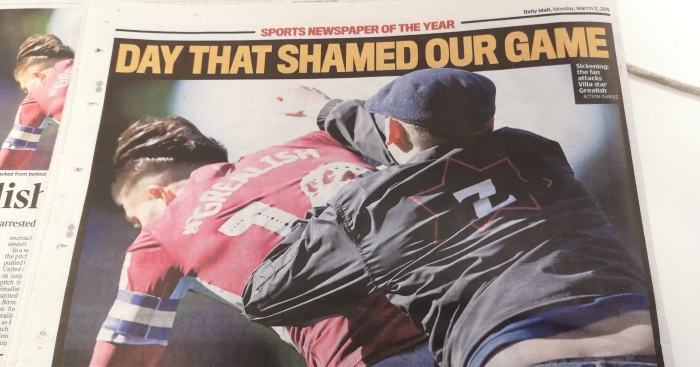 This is not a ‘day that shamed our game’; it was just a day when an absolute bell-end got on the pitch at St Andrew’s to attack Jack Grealish and another idiot came on the Emirates pitch to give Chris Smalling a little shove. The only people who think that football as a whole should be ashamed are people who despise football and everything it represents. So step forward the Daily Mail.

There are almost 3,000 violent incidents on London’s Tube network every year. That’s over eight incidents per day. So is every day ‘a day that shames the London Underground’?

There were 19 violent incidents at Glastonbury in 2017 over four days. That’s almost five incidents per day. So were those four days ‘the days that shamed music’?

According to that back-page story, ‘FOOTBALL’s reputation was in the gutter last night after a thuggish Birmingham City fan ran on to the pitch and threw a cowardly punch at Jack Grealish’. So one man – who happens to be a football fan at a football match – attacks somebody and the whole sport’s reputation is ‘in the gutter’? No other sport – indeed, no other facet of life – is treated in this ridiculous manner.

Inside the Daily Mail, they go even further with a headline of ‘CAN FOOTBALL SINK ANY LOWER?’.

Lower than one man being punched on a pitch by one lone idiot? Yes, we suspect it could sink a whole lot lower. But nowhere near as low as a newspaper that clearly resents that football’s popularity dictates that it must produce page after page of coverage of a sport it despises.

Party like it’s 1999
You can taste hyperbole king Neil Ashton’s disappointment at that 2-0 Arsenal victory at the Emirates, which clatters the Manchester United march narrative to the ground as well as the warm and comforting ‘Arsenal are flimsy’ trope. He’s clearly left feeling a little deflated by the concept of two closely matched sides playing a match that really could have gone either way. Feel his pain in The Sun…

‘Arsenal bullied their way past United, jumping into the final Champions League spot with this stirring win.’

Bullied? Did they? Manchester United made more tackles and committed more fouls. It sounds awfully like you want to imply that Arsenal somehow did not deserve this victory.

‘It is a sad day for English football when two giants of the game are scrapping it out to be the fourth-best side in the Premier League.’

It might be a sad day for you, Neil, but for the whole of English football? Should we all mourn that it’s no longer 1999? Actually, some of us quite like six really good Premier League sides battling it out for one title and three other Champions League places. You don’t speak for us, fella.

Not on the same page
Neil Ashton, The Sun, p52: ‘The blood-curdling, captivating duels between these two fighting for championships are history. Now they shake hands warmly in the tunnel and do little deals with each other before kick-off to swap shirts. It’s all a bit sickly sweet, even by modern, millennial standards.’

Dave Kidd, The Sun, p50: ‘This was the sort of stirring performance the Arsenal would often produce back in the bone-rattling, pizza-flinging glory days of this rivalry…Solskjaer would have been reminded of the times when Patrick Vieira would greet Roy Keane with a friendly hand around the throat.’

Suddenly, life has new meaning to me…
Watching Arsenal beat Manchester United reminded Mediawatch of the last time the two sides met and the reaction to that FA Cup defeat. The headline on John Cross’s piece in the Mirror after that game?

It’s worth remembering that Manchester United and Arsenal were – at that juncture – level on points in the Premier League, both three points behind fourth-placed Chelsea, who had not yet been placed into official crisis by the media.

‘It is difficult to work out exactly where Arsenal are going under Emery – other than out of the cup – while, in stark contrast, United are clearly going places under Solskjaer.

‘United are closing in on the top four, into the fifth round of the FA Cup and they have still got the Champions League in their sights as Solskjaer has completely changed the mood.’

‘Closing in on the top four’ was an odd way to describe a club that was then in sixth, in comparison to a team in fifth who were ‘drifting towards mediocrity’.

Now the two clubs have met again, John Cross was there, and this time Arsenal came out victorious at the Emirates, where the hosts ‘showed they will still have a major say in the battle for a top-four spot’. Yes, it turns out that a team that has been in the top six since late September and is now in the top four could still have a ‘major say’ in who finishes in the top four. They weren’t ‘drifting towards mediocrity’ at all!

This line is a doozy from Cross:

‘It was arguably Arsenal’s most complete win under Unai Emery and suddenly puts them bang in contention for the top four.’

Mediawatch is not about to check every Premier League table of the season but here’s a quick precis of where Arsenal have been at the beginning of every month this season:

Come on lads, everybody has an off-day.

Bottle jobs
Remember a whole two weeks ago when The Sun‘s Charlie Wyett declared Liverpool’s title race lost when they were actually top of the Premier League by a point after drawing away at Manchester United?

‘Liverpool fans chanted about being top of the league but, deep down, they know their team is choking.

‘It is almost as if they are now giving Spurs a real fight to land the crown as the great bottle jobs of English football.’

‘Jurgen Klopp’s team look to be haunted by the ghosts of 2014, Liverpool’s previous title cock-up.

‘As for Liverpool fans thinking it is finally going to be their year, disappointment is around the corner.’

Well, the good news is that Charlie Wyett has been watching Liverpool again, and this time they beat Burnley 4-2 to remain one point behind Manchester City. So are they still ‘chokers’ and ‘bottlers’?

‘After the match Kop boss Klopp said: “Nobody gets rid of us.”

‘His team had appeared in danger of losing their bottle with just four wins from 11 in 2019.’

We don’t know what’s better? The ‘appeared in danger’ from the man who quite unequivocally said they were ‘choking’ just two weeks ago, or the wonderful statistic of ‘just four wins from 11 in 2019’, which is factually correct but a tad misleading when talking about a team on a nine-match unbeaten run that became ten matches against Burnley.

‘But leaders City know they are still in one hell of a fight for the title with eight matches still to go.’

But surely they know that for Liverpool fans, ‘disappointment is around the corner’? Mediawatch is confused…though not half as confused as Charlie Wyett.