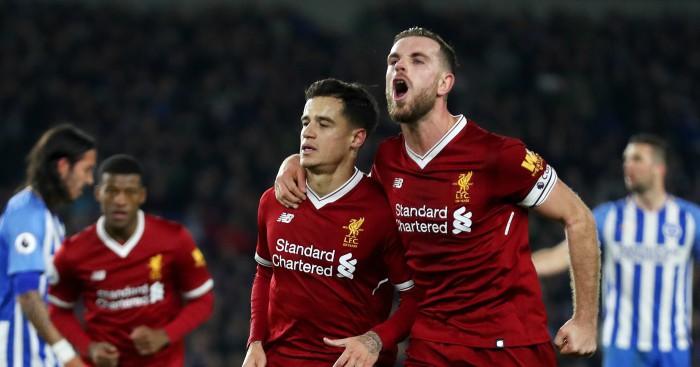 Liverpool fans will recall the events of October 22 last year with a shudder and a wince. The vivid flashbacks of a haphazard defence being constantly and ruthlessly carved open, of Joel Matip flailing and Simon Mignolet flapping, of Dejan Lovren being abruptly and mercifully removed from his own nightmare, all etched in the collective memory of one painful afternoon.

Jurgen Klopp remembers it well, albeit a little differently. “There was one example of a bad game from us when we gave all the responsibility to Phil and it was Tottenham away,” said the German in March. “Phil Coutinho was a very dominant player in our game and when we were not at our best it was always a good idea to give him the ball, maybe he has an idea.”

That chastening 4-1 defeat to Tottenham seven months ago was a watershed moment for Liverpool in what has been a season of forward steps. It left them ninth in the Premier League table as a side trying and struggling to balance the demands of domestic and European football. They had won six of their first 14 games in all competitions ahead of their trip to Wembley; they embarked on an 18-game unbeaten run thereafter.

But it might also have been the point at which Klopp realised Liverpool would not grow unless he confiscated their comfort blanket. Coutinho had more touches than any Tottenham player that day (obscene in a 4-1 defeat), and three Liverpool players (Alberto Moreno, Mohamed Salah and Roberto Firmino) passed to him more often than anyone else. It was a dangerous amount of responsibility to bestow on one man, particularly a left-sided forward.

The thought crossed Klopp’s mind when Barcelona came calling again in January. “It was always clear when Phil didn’t play we had to do the job differently, to put responsibility on different shoulders and spread it between the players,” he said two months ago. To sell Coutinho was to remove the safety net, and to not directly replace him was to trust the squad to step up without him. A problem shared is a problem halved, and the gamble has certainly paid off.

When Liverpool face Real Madrid in the Champions League on Saturday, there will be no such over-reliance. Salah will be expected to score, but Firmino will be required to create, Virgil van Dijk must marshal and organise the defence, and the midfield needs to press, harry and provide a suitable platform for success. Liverpool must be greater than the sum of their already wonderful parts to emerge from Kiev with a sixth European Cup.

In Salah, Firmino and Sadio Mane, they have players that can change the course of any game. But beyond the front three, there is no such catalyst. If Real nullify the Champions League’s most potent forward line – and that is considerably easier said than done – who will assume the “responsibility”? The excellent Jordan Henderson has improved his forward passing immeasurably, but is still limited. The wonderful James Milner has slotted seamlessly back into midfield, but is still limited. Georginio Wijnaldum remains criminally underrated, but is still limited. Each has an obvious ceiling and are already banging their heads.

It has been far from a problem in Europe up to now. Porto, Manchester City and Roma were all swept aside in exhilarating 30-minute spells en route to the final. But there will be no Anfield effect in Kiev, and Real are expected to prove a much more resolute opponent. Who will pick the lock if Salah, Firmino and Mane cannot break down the door?

The absence of Alex Oxlade-Chamberlain and continued struggles of Adam Lallana only compound the problem. The pair are less consistent than Henderson, less reliable than Milner or Wijnaldum, but more capable of turning a game through individual brilliance. Liverpool have played two cup finals since 2012, scoring two goals; Coutinho scored one and assisted the other.

“On a good day it makes you more unpredictable if you don’t have this dominant player,” Klopp said of Coutinho two months ago. “But on another day you miss a player like that.” Liverpool have managed not only to cope but to adapt and evolve without their “dominant player”; they must hope “another day” does not come this weekend.