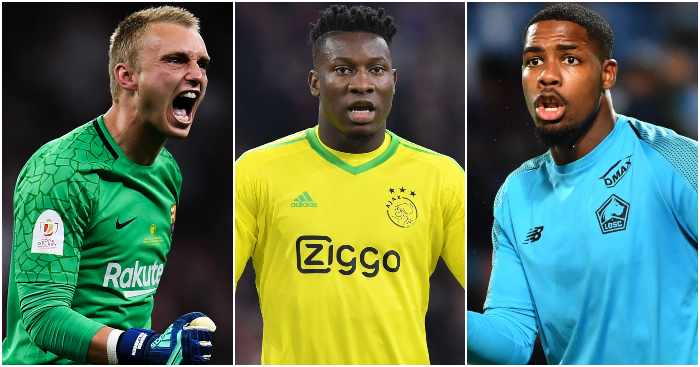 With David de Gea seemingly no nearer signing a new contract, Manchester United are said to be on the hunt for possible replacements. It could be this guy, or it might be any one of this trio linked with the Red Devils in recent days…

Even though the Cameroon stopper has occupied Ajax’s goal since 2016, this has been a breakthrough year for the 23-year-old. Onana starred in Ajax’s run to the Champions League semi-finals while being nominated as the Eredivisie goalkeeper of the season. At international level, he is the reigning Indomitable Lion of the Year after playing a leading role in helping Clarence Seedorf’s side reach the Africa Cup of Nations.

Onana is preparing for that tournament later this month amid a backdrop of persistent transfer speculation. United were reported to have had an offer rejected by Ajax last month only a few weeks after he extended his contract at the Johan Cruyff Arena until 2022, while Barcelona are also keeping tabs on Onana. It was there he began his career in Europe after being spotted at the Samuel Eto’o Academy back in Cameroon and Barca brought him to La Masia as a 13-year-old. Onana stayed there for five years before moving to Ajax as an 18-year-old. His first-team opportunity came in 2016 when aged 19 he took the gloves off Barca-bound Jasper Cillesen, capitalising on Tim Krul’s untimely injury.

Onana’s Barca and Ajax roots are evident in his willingness to play the ball out from the back and though the Eredivisie winners are content to use their goalkeeper while recycling possession, in the Champions League – where opponents are more willing to press Ajax – no keeper has attempted more long passes into the opposition half. Onana attempted 27 more than the second highest total, which perhaps explains a poor overall passing accuracy rate of 56.93% – the sixth lowest of the 29 keepers to have played more than five games in the competition.

Mistakes – like this one – are perhaps inevitable for any young goalkeeper and Onana, who turned 23 in April, is no different. His tendency to parry shots back into play is often a root cause. No goalkeeper in the Champions League made more than the three errors Onana committed which led to shots on his own goal. But only Alisson made more saves while Onana kept out 75% of the shots on his goal, putting him in the top six of 29.

There is no question that Onana still has some development ahead of him, which puts him at the ideal club. He has been open in admitting his desire to one day return to Barcelona but his thirst for regular football remains his driving force. He might get that at United should De Gea leave, but he wouldn’t be granted the patience Ajax allow him to make his mistakes.

“I think Andre is fantastic. He came to Ajax aged 18 or 19 and the way he developed and the natural attributes that he already had, his speed, his reaction and I think he set himself as a great goalkeeper.” – Edwin van der Sar.

“Barcelona is my home. When I go there all the doors are open. It’s normal because I was there since I was young. Everyone would love to go to Barcelona but for me it’s important to play. I am happy when I play so I will try to play somewhere.”

“When you’re a young player, it’s important to choose game time, not only going to a big club when you’re not going to play.”

Another 23-year-old stopper being linked with a return to his boyhood club is Maignan. The Lille keeper has had a big few weeks at the end of a hugely impressive season. First he was named the Ligue 1 Goalkeeper of the Season, and then he received his first senior call-up from Didier Deschamps, crowning his rise through every international age group. Now apparently he’s a target for United, Ajax and PSG.

It was at PSG where Maignan began his career. The French Guiana-born keeper came through the ranks at the Parc des Princes before hitting the same glass ceiling most of their academy graduates struggle to break through. Aged 20, Maignan moved to Lille, where he was given his first-team opportunity by Marcelo Bielsa, who preferred the youngster to Nigeria veteran Vincent Enyeama. Despite Bielsa’s sacking, Maignan retained his place for the most part with some patchy form while Lille narrowly escaped relegation.

Christophe Galtier even dropped Maignon at one point late in the season with the intention of ‘stinging’ his keeper into a return to form. It seemed to work as this season has been a different story. Maignan has been a model of consistency, keeping 15 clean sheets – 10 more than last season – and conceding the fewest number of goals while Lille earned a Champions League place by winning the race to finish closest to PSG.

While demonstrating all the tools a modern goalkeeper needs, especially with the ball at his feet, Maignan has also earned himself a reputation as a penalty-saving specialist having kept out seven Ligue 1 spot-kicks. His first touch in senior club football was to keep out Paul-Georges Ntep’s penalty after Enyeama had been sent off against Rennes in 2015. Since then, Maignan has kept out Edinson Cavani, Mario Balotelli, Falcao, Edinson Cavani and Nabil Fekir from 12 yards.

Maignan now finds himself on the goalkeeping merry-go-round as it gathers momentum ahead of the conclusion of the international fixtures. If PSG cannot tempt De Gea to France then they are apparently considering a return for the player they sold to Lille four years ago for only €1million. If De Gea goes to PSG, then Maignan is among United’s list of possible replacements, as is Onana. Should United opt for Onana, then Ajax have already begun laying the foundations for a move for Maignon. Lille had expected to net around £22million but having seen Ajax place a £35million price tag on Onana, Maignon’s price has shot up to around £31million.

“Maignan is part of a team which achieved a superb championship, he oozes serenity, his athletic presence is impressive.” – Didier Deschamps.

“I wanted to be an outfield player with my friends and score goals. In fact, in my head I consider myself as an outfield player. When my team has the ball, I take part in the game and try to give an outlet to my defenders. It’s only when my team loses the ball that I become a goalkeeper again. It’s my job after all!”

We ❤️ Magic Mike Maignan !! That first save though 😱. @mmseize pic.twitter.com/WDxtsokiiJ

The priciest of the three most recently linked options has played only five league games in three years. Barcelona’s Copa del Rey keeper has had enough and he wants to move on in the hope of getting a game somewhere. That does not mean he will be granted his wish.

Cillessen asked to leave Barca last summer but the club refused to sanction his exit; they were on to a good thing. The Holland keeper was always solid when called upon, his Ajax upbringing shining through while demonstrating how comfortable he is in Barca’s system and philosophy. Marc-Andre ter Stegen was impressively consistent in form and fitness but in an emergency, Ernesto Valverde had plenty of confidence in his stand-in.

So when Cillessen asked to leave 12 months ago, Barca said yes – but only on their timetable and terms, which no interested party was prepared to meet. A year on, Barca are apparently similarly minded, leaving the 30-year-old pretty peeved.

As well as United, Benfica have been linked with Cillessen but whether the Portuguese Primeira Liga ranks high enough for the keeper, we will have to wait and see. Benfica are also unwilling to go anywhere near Cillessen’s buy-out clause or Barca’s valuation.

His inactivity at Barca hasn’t affected Cillessen’s status as Holland’s No.1. Despite spending most of his time sat on the sidelines at the Nou Camp, he has remained an unflappable presence at international level for five different coaches. That calmness and experience in comparison to Onana and Maignan may appeal to United, especially given the current state of their defence.

“Every football player wants to play matches and Cillessen is too good to be a back-up.” – Ronald Koeman

“The fact Barcelona put a £53million price tag on me doesn’t make things easier. I am aiming for a club in one of the top five leagues in Europe, but it’s still quiet now.”