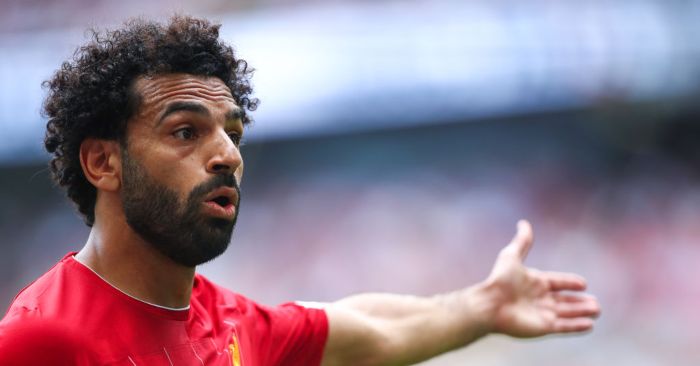 He’s baaaack
Wrote The Sun‘s Neil Ashton on May 20:

‘ENGLISH football has 76 days to get its act together.

‘City make no apology for defending the Premier League title, for back-to-back Carabao Cups, plus the FA Cup after this hopelessly one-sided final.

‘They want more and they will get it.

‘In the summer recess it is down to their rivals to work out a way to stop City crushing teams in showpiece finals.’

And now, 76 days later and with English football having ‘got its act together’, City face a team not in the Premier League’s bottom half at Wembley and subsequently fail to ‘crush’ them in a ‘showpiece final’…

‘Liverpool were stirring, still a few notches down from the exhilarating Barcelona performance, but ominous all the same.

‘They were relentless after the break, finally rewarded when VVD wrong-fotted City’s defence for Matip to head in the equaliser.

‘They could have won it but Walker deserves a man hug from Pep after his acrobatic recovery off the line in the final minute.’

It’s almost as if beating 11th-placed Watford 6-0 in the FA Cup final had nothing to do with the minuscule gap City had over Liverpool. Funny, that.

Charlie mean
On the day that one of the most ambitious and far-reaching business ventures in journalism history launches and promises to change the industry forever, there is still proof that a subscription-based model is not for everyone.

Charlie Wyett is not delighted to announce that he has joined The Athletic, for he is back at The Sun to take weird snipes at Mo Salah. ‘It’s no Can do as Mo so sloppy’ reads the headline to his short piece on the Egyptian.

‘Eric Cantona is the all-time top scorer in the Community Shield with five goals,’ he writes.

‘Remarkably, Mo Salah could have overtaken him by putting six past City in 90 minutes – and he had plenty of chances.

‘But he was guilty of some tame finishing, hit the woodwork twice, and was denied by decent goalkeeping.

‘He then watched in injury time as Kyle Walker delivered a brilliant goal-line clearance following the Egyptian’s header.’

So he hit the woodwork twice, forced some decent saves from Claudio Bravo and had one shot cleared off the line? That sounds like a decent performance, particularly considering he had played 30 minutes of pre-season before Sunday.

Indeed, only Bravo and Walker (both 8) received higher Sun match ratings than Salah’s 7. Not bad.

And how is this your takeaway from an otherwise really exciting final?

‘The game went into extra-time following goals from Raheem Sterling and Liverpool’s Joel Matip. And Salah finally found a way past Claudio Bravo in the penalty shootout – his 11th shot of the day.’

That’s a weird way of saying that he converted a high-pressure spot-kick that Liverpool had to score to stay in the game.

‘With the start of the Premier League just four days away, there is a hell of a lot of pressure on Salah to carry Liverpool through. Sadio Mane does not even return from his post Africa Cup of Nations break until today. He will not face Norwich on Friday.’

It is at this point that Mediawatch recalls Wyatt branding Salah a Mesut Ozil impersonator and flat-track bully in February. He was accused of ‘only turning up against weaker opposition’ – then scored the opening goal in a Champions League final three months later.

When Mo Salah can go into this season (uncomfortably) wearing a Premier League Golden Boot on each foot and a Champions League winner’s medal around his neck, it is probably safe to assume he can handle “a hell of a lot of pressure”, Charlie.

All part of the plan
Wyett’s is too critical a take from a glorified friendly. The Liverpool Echo go completely the other way.

Apparently Jurgen Klopp has Pep Guardiola ‘right where he wants him’ as Liverpool showed they ‘knew exactly how to expose City’ at Wembley.

‘And that, with the amount of games and competitions both teams will be striving to win, might be an incredibly important virtue going forward this season – given those incredibly fine margins last term too.’

It might. If only a) Klopp ‘knew exactly how to expose City’ in either of their two meetings last season, b) he managed to figure it out before half-time on Sunday and c) it ended in Liverpool winning.

Only a local newspaper could suggest losing a final means the defeated manager has the winner ‘right where he wants him’.

So what?
‘Klopp refused to condemn the travelling Reds fans who loudly booed the national anthem before the game – in front of the watching Prince William’ – The Sun.

Hyphen hated
The biggest story in world football as of Monday lunchtime is not the booing of the national anthem, but the fact that ten new Premier League signings look pretty bloody exciting.

It’s just a damn shame about that hyphen.

That second hyphen is making us itch. pic.twitter.com/DSKztadc0e

26, my baby’s a 26
Question: Is Harry Maguire joining Manchester United?

Question: Does Samuel Luckhurst of the Manchester Evening Propaganda therefore have to keep gaslighting Harry Maguire about his age?

‘That is perhaps partially an admission of defeat. United have exited the Champions League at the worst possible time and their stock has not been this low in decades. Dybala wants to stay in Turin and the collapse of his proposed move would not have been solely money-related. Selling United to Harry Maguire, approaching 27, was never going to be arduous and United blew City out of the water with an opening £70m bid.’

FAO the presumably ‘approaching 20’ Samuel Luckhurst: he’s 26 until he becomes 27. That’s how this works.

And again, United are actually signing him. You don’t need to pretend this is his last chance at relevance anymore.

Luck of the draw
After Thursday’s baffling end to a weird article comes this from Luckhurst. Again, answers on  an e-mail with the subject title ‘I know what the f*** he is talking about’.

‘While Jose Mourinho was still manager, it emerged United had distanced themselves from his ‘short-term’ strategy. Alderweireld, arguably a better defender than Maguire but 30-years-old, was too synonymous with Mourinho. Mario Mandzukic is 33 and was scouted by Mourinho in person.

‘They may offer nothing again.’

Contradiction of the day
Writes David Maddock in the Daily Mirror:

‘Before this game he suggested he was worried that the bar in the Premier League now is so high, the approach to the season means not just hitting the ground running, but sprinting.

‘Here at Wembley, Liverpool proved to their manager they are capable of doing that if the second-half evidence was anything to go by.

‘They started slowly, a defence slightly disorganised and exposed by City’s clever set-piece that saw Raheem Sterling open the scoring.’

‘Oh, you don’t say?’ of the day
‘I wouldn’t put it past Pep Guardiola to go for another Treble, I think he would snap your hand off for it’ – Alan Shearer, The Sun.