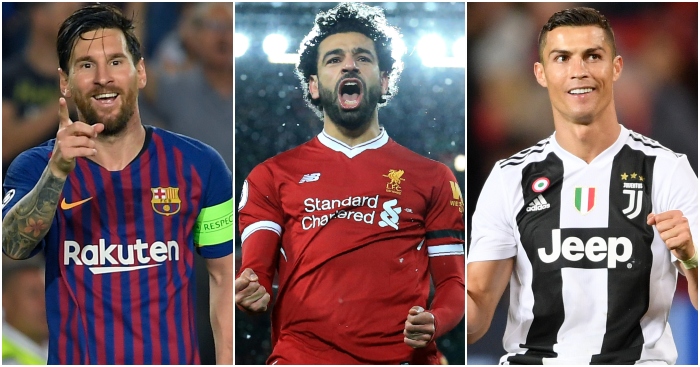 20) Alassane Plea (Nice & Borussia Monchengladbach) – 22 goals
Games played: 35
Minutes per goal: 130
Eleven goals in the second half of last season caught the eye of Newcastle, Tottenham and West Ham but the 25-year-old opted to join ‘Gladbach, where he has maintained that goalscoring with 11 more in the Bundesliga and DFB Pokal.

19) Andrej Kramaric (Hoffenheim) – 22 goals
Games played: 35
Minutes per goal: 118
The Croatia striker is finishing the year strongly, with his opener against Man City in the Champions League on Wednesday his ninth goal in nine matches. If Hoffenheim were tempted to sell Kramaric, they can expect a huge profit on the £5million they paid Leicester in 2016.

18) Pierre-Emerick Aubameyang (Arsenal) – 22 goals
Games played: 33
Minutes per goal: 116
Aubameyang moved to the Emirates late in January and all of his goals this year have come in an Arsenal shirt. The Gabon star has netted 10 times in the Premier League this term, despite alternating between central and left-wing roles.

17) Sergio Aguero (Man City) – 22 goals
Games played: 30
Minutes per goal: 100
At one point it seemed like Gabriel Jesus would be the end of Aguero at City. The Argentina centre-forward has had to adapt his game somewhat but with 12 goals and three assists this term, he is now firmly back in favour as Pep Guardiola’s first-choice striker.

16) Luka Jovic (Eintracht Frankfurt) – 22 goals
Games played: 34
Minutes per goal: 88
Only Lionel Messi on this list has a better minutes-per-goal rate than the Serbia centre-forward, who leads the race for the Bundesliga Golden Boot with Borussia Dortmund’s Paco Alcacer. Jovic has already surpassed his Bundesliga total for last term while also netting five times for Frankfurt in the Europa League.

15) Cristhian Stuani (Girona) – 23 goals
Games played: 31
Minutes per goal: 107
The former Middlesbrough winger is the only attacker keeping pace with Lionel Messi in La Liga, where Stuani has netted 11 goals in 13 appearances. At this rate, he is on course to beat his 21-goal haul in La Liga last season.

13) Kylian Mbappe (PSG) – 24 goals
Games played: 37
Minutes per goal: 119
As the Ligue 1 season approaches the halfway point, Mbappe is only one goal away from matching his tally of 13 in the whole of last term. His 12 goals have come in 11 games at a rate of one every 70 minutes.

12) Mauro Icardi (Inter Milan) – 24 goals
Games played: 33
Minutes per goal: 116
The Italy striker got off to a slow start this term after finishing last season as the joint-top scorer in Serie A. But after netting against Spurs on September 18, Icardi has scored 12 goals in 15 league and Champions League appearances.

11) Edinson Cavani (PSG) – 25 goals
Games played: 37
Minutes per goal: 118
The Uruguay striker has scored six goals and created another in his last five appearances over the last month. If Cavani is trying to catch Maurizio Sarri’s eye, reports suggest he has succeeded…

10) Neymar (PSG) – 26 goals
Games played: 26
Minutes per goal: 88
The Brazilian is leading the hotly-contested leading scorer competition at PSG, with 16 goals edging him ahead of Mbappe. Neymar would most likely be much closer to where he feels he belongs on this list had he not missed 18 games through injury at the back end of last season.

9) Ciro Immobile (Lazio) – 29 goals
Games played: 42
Minutes per goal: 116
After finishing last season as joint-top scorer in Serie A alongside Icardi, Immobile has started the new campaign in similar vein, netting 10 times to be level with Cristiano Ronaldo and only one behind Genoa’s Krzysztof Piatek.

8) Florian Thauvin (Marseille) – 29 goals
Games played: 44
Minutes per goal: 114
The France attacker went from a tuxedo-clad flop at Newcastle to World Cup winner, with 14 Ligue 1 goals during the second half of last season sealing his place in Didier Deschamps’ squad. A record of 12 goals in 17 appearances this term is reportedly catching the eyes of Chelsea, Bayern, Inter and Atletico, though the 25-year-old is understandably wary of what happened the last time he left the comfort of Marseille.

7) Antoine Griezmann (Atletico Madrid) – 30 goals
Games played: 50
Minutes per goal: 133
The France star has struggled comparatively this term, with only eight goals in 22 appearances in all competitions. Prior to winning the World Cup, Griezmann also won his first major trophy, the Europa League, while firing 22 goals during the second half of last season.

6) Harry Kane (Tottenham) – 30 goals
Games played: 46
Minutes per goal: 125
The Tottenham striker sandwiched his Golden Boot at the World Cup with 17 goals in the second half of last season and another 13 during the current campaign so far. Kane will fancy his chances of edging up a place or two before the end of the year given he said last week: “In December, January I hit top form.”

5) Luis Suarez (Barcelona) – 31 goals
Games played: 47
Minutes per goal: 130
Barca are reportedly worried about the state of Suarez’s knee, which has received stem cell tratment in recent weeks. You can understand their concern. The Uruguay star has scored 10 goals this season despite playing in discomfort, following 31 last season, with all but 10 coming after the New Year.

4) Mo Salah (Liverpool) – 34 goals
Games played: 45
Minutes per goal: 108
Last season’s Premier League top scorer – an achievement secured on the back of 15 goals in 15 games in 2018 – began this new campaign rather more slowly. But Salah is getting into his stride now, with his hat-trick at Bournemouth demonstrating some of the swagger on show last term, while his winner against Napoli proved he hasn’t lost his sense of occasion. Liverpool have four games to Bayern’s three before the end of the year for Salah to crack the top three.

3) Robert Lewandowski (Bayern Munich) – 38 goals
Games played: 42
Minutes per goal: 88
Bayern must be glad they dug their heels in this summer when Lewandowski wanted to leave the club. Last season’s Bundesliga top scorer has saved his best form for the Champions League this term, with Lewandowki netting eight goals during the group stage at a rate of one every 67 minutes.

2) Cristiano Ronaldo (Real Madrid and Juventus) – 39 goals
Games played: 42
Minutes per goal: 92
The Juventus attacker will point to the fact he has played fewer games than Messi if he fails to make up the four-goal deficit before the end of the year, but Ronaldo is still operating at a slightly less efficient rate than his great rival. After taking three games to feel his way into Serie A, the 32-year-old has scored 10 goals in 12 games since, creating five goals in the four games he did not score in during that run.

1) Lionel Messi (Barcelona) – 43 goals
Games played: 46
Minutes per goal: 86
The Barca machine was trailing Salah in April, so he simply scored eight goals in his last six La Liga games of the season to seal his record fifth European Golden Boot. His tally of 26 goals in all competitions in the second half of 2017/18 would have been enough to get Messi in the top ten for the whole of 2018, but the Argentina genius has netted 17 goals in 18 games to take top spot.