Home F365 Features Can Spurs now be a big brother to troubled Tottenham? 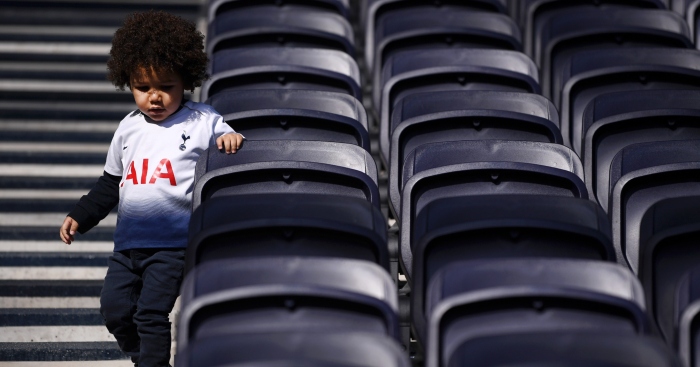 Grade One is a little more extreme than usual, but haircuts unfortunately make little difference these days. In any case, the barber is insistent: that’s the price of a quick chat about Tottenham’s return to White Hart Lane and how the community feels about that return.

He doesn’t want to be recorded and he doesn’t want me to use his real name, but he’s originally from Africa and he’s been cutting hair on Tottenham High Road for 16 years now. Outside, Spurs fans are beginning to flow down from Seven Sisters, eyes fixed way ahead. Their new stadium now dominates the local horizon in a way that its predecessor never did. Floodlight glare used to give it away at night, but during the day it refused to reveal itself until the last few hundred yards.

Now it’s different. The mighty bowl now in its place doesn’t quite steeple into the sky, but it does loom above everything else and can now be seen almost as soon as you leave the station. The metaphors draw themselves: it’s standing guard, watching over its community.

Remember how close you used to have to get to WHL to see it? Now it towers above everything – I’m not even at the police station yet. pic.twitter.com/l55GYFNeSW

Well, that’s what people like me think. Outsiders, day-trippers, people who only come here for one reason. It’s a ridiculous, antiquated perception, really, but one most people share: the football club as the industrial heartbeat, the arterial pipeline which pumps outside money into local business.

The barber just shrugs when asked about the effect of Tottenham’s sabbatical from the area. In fact, he didn’t know that the stadium was finished or that, on that very day, it will open with a visit from Southampton’s U-18s. His English is broken and we repeat our questions and answers a couple of times, but he seems entirely indifferent. There’s been no effect on his work, none whatsoever on his life.

And of course there hasn’t. People don’t get their haircut on the way to football and I’m only here because I want something.

The stadium really is a work of art. On Sunday, the late morning sunshine glints off the exterior glass and even by 11am there are dozens of fans stood at its base. A couple drift around the perimeter, but most just stand and stare upwards. Up close, it’s enormous. Part of its construction was completed while White Hart Lane was still standing and even at an early stage its skeletal structure had started to dwarf the existing ground. You come prepared, then, but the scale and the architectural flourishes still take your breath away.

Inside, it’s better than could ever have been expected. Each new stadium brings a fresh round of concerns about modern football, ticket pricing and corporate creep, and Tottenham’s new ground won’t quell any of them. Beneath the newly-laid pitch, NFL gridiron lurks. If people weren’t aware of that before, then after visiting the club shop they will be: a small corner is dedicated to the American sport and full of its merchandise.

Traditionalists will also recoil from the band of executive seating which runs around the middle tier. There’s no cheese room, nobody’s quite sure what happened to that, but Spurs’ luxury areas are very decadent indeed and entry comes at the cost of selling a few non-essential organs. So, yes, this is the modern game with a capital M and, as of Sunday, English football’s most evolved location.

These are fair criticisms and part of important conversations. They also belong in a context, though. Tottenham have reacted to a trend and this stadium is just part of their adaption. If the aim is to compete in the Premier League, then these facilities are a pre-requisite – and, to Daniel Levy’s great credit, they are being delivered as part of a package which makes plenty of deference to week to-week fans.

The detail is striking. The re-imagined Park Lane is a headline feature, of course, but this is a stadium with a clear and personal identity. A bigger ground used to mean just that: packing up and moving to an out-of-town site which could literally accommodate more people. Often, the price of that new home was the total reduction of any sense of belonging. A relocated statue here or there, offered in recompense, but – generally – many of the new-builds are startlingly bland and distinguishable only by seat colour.

Tottenham supporters have been spared that. Levy and his architects have found a balance between constructing the stage they now desire and preserving the sort of intimacy which can be easily lost. That’s quite a feat: to double a capacity and prevent your native culture from dissipating into the vast open spaces. Truly well done to Tottenham.

What a place this is. pic.twitter.com/K3vEfsaggH

Describing the environment is tricky. Talking of aura and soul is trite, but there’s something you feel when you step off the concourse and inside. Belonging? No, not quite, more just a sense of being completely seduced. Later, the club’s official Twitter account will show videos of fans reacting to the ground for the first time and, most affectingly, one guy – middle-aged and old enough to have seen the full rainbow of Tottenham teams – almost breaks down in tears. Television fans will sneer, some plucky YouTuber will probably try to make him into a meme, but that’s really how it feels. Tears don’t really go with my new, aerodynamic haircut, but it is pretty overwhelming.

Maybe it’s relief. The vivid symbols help, the cockerel on the roof has been presented beautifully, as does the decorative facia in the concourse. Together, they offer the reassurance that every fan needs when they step into a new building. Great attention to detail has been paid. Yes, Spurs have spent a lot of time on their corporate areas and have spared no expense on their press facilities either, but the common parts of the ground show the same care.

Modernisation is now mandatory. Do it, or give up the right to compete, The method is still up to the clubs though, and they can choose how they package that change. Tottenham have really succeeded on that front. Some of the praise should be deferred until their long-term ticketing structure is revealed – prices are being frozen next season – but so far so good.

Whether White Hart Lane’s successor is a social success is a different matter though, and that question likely won’t be answered for years.

In London, football stadiums aren’t the oddities they are elsewhere. As a general rule, the wealthier the area, the less objectionable it is to see vast sums of money spent on stadia. In some places, a football ground actually fits its environment. Craven Cottage suits the local mood in that strange way. Selhurst Park likely won’t when it’s redeveloped but, for now, the way it shapes in to its community’s contours feels perfect. Goodison Park is wonderful, although soon to be lost, and Turf Moor is tonally right, as well as offering that endless view out across Lancashire.

At Tottenham that isn’t the case. While White Hart Lane’s sheddishness allowed it to blend in, the new ground is – bluntly – an opulent jewel in a less than affluent area. Currently, this is a borough with just under 33% unemployment and where, according to a study conducted by The Independent in 2012, almost 40% of children live in poverty.

Finding locals who were willing to talk about that was difficult. It’s a strange kind of omertà; maybe it’s me – I’m obviously an outsider and flashing a press card is no way to gain trust – but while those who belong to organisations with an existing voice will talk more freely, ordinary people who work close to the ground are more reticent. A worker on a cigarette break outside a local store isn’t interested. He’s not friendly at all. The owner of a nearby phone shop is more polite, but his eyes narrow at the invitation and he declines. Asif talks to me, but only on the condition of a name change. He lives in Enfield now, but went to school in Tottenham and returned six months ago to work here. Six days a week, he serves customers at a cafe close to the ground and while he’s sure that the greater footfall will be good for his employer’s business, he isn’t a certain about any deeper positives.

“Everyone knows how Tottenham is. I think if they developed the area more before making the stadium, then the stadium would have had a bigger effect on the area. They’ve just stuck an expensive thing in an area like this.”

Long before the stadium was opened, the club helped to construct the area’s new Sainsbury’s, two new schools and a batch of affordable new homes. Asif isn’t negative about the club and he isn’t accusatory in any way, but he certainly doesn’t see the new ground as an assurance of a brighter tomorrow. He looks to be in his early 20s – meaning that he would have been a teenager in 2011 – and the memory of the Tottenham riots evidently remains fresh. Not just the events themselves, of course, and the underlying themes, but also how long it took for the scars of unrest to heal. Asif remembers seeing damaged buildings as late as 2014.

It’s speculation of course, my theory rather than his, but when a generation is taught that they’re not a priority, it must be very tempting for them to believe that they’ll always be an afterthought.

It’s a strange dynamic. White Hart Lane never created this contrast in quite the same way, because it wasn’t such an obvious representation of disparity. Its replacement absolutely is, though, meaning that one of the challenges for Tottenham now – having so overwhelmingly succeeded in the physical delivery – is to be the big brother here. To not just fulfil their obligations with Haringey Council, but to somehow help their surrounding community match their own recent rise.

How that’s done is a question for sharper minds than mine. There are good signs – four of the employees in the new club shop tell me that they live in Tottenham itself – and the vast majority of workers inside the ground are young and enthused. Long-term change is different, though, and that can’t be measured today, next week, or even in five years’ time.

These issues aren’t for everyone. Fine. No shaming, no judgement. Every supporter wants something different from their club and many of those ambitions exist entirely on the pitch itself. But what a chance Tottenham have here. They’ve spent the last decade straightening their own backs and what a legacy of this project it would be if, over the coming decades, they could stand tall over this part of the world figuratively, as well as literally.