Home F365 Says Can we keep *this* Man United side? 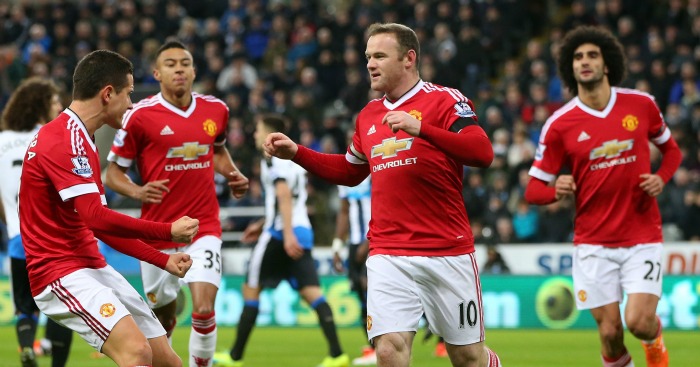 On Monday, Daniel Storey wrote his Big Midweek column but dithered over his section on Louis van Gaal; there was nothing left to write. If felt like months since he had written that there were no longer any reasons to keep the Dutchman; it felt like every day that he was writing that following United had become a chore for supporters rather than a pleasure. United were an endurance test not just for fans but for writers. What could you say about another 0-0 draw or a narrow one-goal win that seemed to please the Dutchman rather more than it should?

Perhaps the hint was there in the line-up. There was no Juan Mata for the first time in the Premier League this season, Van Gaal finally losing patience with a player without an assist since September. With Jesse Lingard fit again, Van Gaal opted for pace on the flanks. Specifically, pace over possession. He even swapped Lingard and Anthony Martial so the Frenchman could make room for Ashley Young to overlap on the right.

The clue was there. For all Van Gaal’s supposed contentment with narrow wins over Swansea and then Sheffield United, he made changes. He wanted more movement. He wanted more width. It was easy to laugh when he described relegation-embattled Newcastle as being “in good form” but it was clear that he had seen the Magpies at Arsenal when they passed the ball incredibly well but struggled in front of goal. He had every right to expect the same again.

Instead of the slow, sideways possession that has brought so few early goals, United seemed relatively happy to cede control of the ball to the home side, confident that a) Newcastle did not have the creativity to actually get beyond their defence and b) United had the pace to hurt them on the counter-attack. He was initially right. It was Newcastle who had early possession for possession’s sake and the visitors who scored after their first meaningful attack, though the way Young scampered down the wing suggested that Van Gaal had identified Newcastle’s left flank as a weakness.

A stroke of luck later (for what it’s worth, I agree with Jamie Carragher that it was a penalty) and United were ahead. The second goal owed nothing to luck and everything to the vision of Ander Herrera, the time-machine touch of Rooney and the pace of Lingard. It was dynamic. It was devastating. It was damned good fun.

The match report can tell you the facts of the game but the fascinating story is that Van Gaal made a series of positive moves – bringing on Memphis Depay for the flagging Lingard when most would have expected Juan Mata to be introduced to slow down play, eventually bringing on Mata for the tiring Herrera rather than Martial, pushing the Frenchman up front alongside Rooney when he sniffed a winner at 2-2. And the Dutchman actually looked like he was enjoying the game; maybe he was remembering that he used to rather relish managing an attacking side.

“It feels like a defeat,” said Rooney after a game that his team eventually drew 3-3. Given the chance, I would have asked if a 1-0 win over Sheffield United really felt like a victory. After scoring two goals, making another and generally looking like a potent attacking force, I would be surprised if Rooney did not enjoy Tuesday night more than Saturday tea-time; more than most games this season, in fact.

There were worrying elements to their performance at Newcastle – missed chances, sloppiness in possession and some frankly awful defending. While one problem was solved, another raft appeared. This was more Manchester City than Manchester United – exciting, fragile, open, frantic. As it’s City who are fighting for four trophies, that’s not such a terrible place to be. It’s also a pretty entertaining place.

We shall discover this weekend whether this was a one-off, whether Van Gaal will be frightened back into his shell by a six-goal thriller that showcased the best and the worst of his squad once again. Just a different best and a different worst. This is a side with all the components to be – if not brilliant – then much, much better. It’s just a shame that we so rarely see them in the same game.

When he calms down from the fury at two dropped points we hope he decides it’s worth throwing the dice again rather than keeping it in the cupboard for rainy days. You won’t always get a pair of threes.