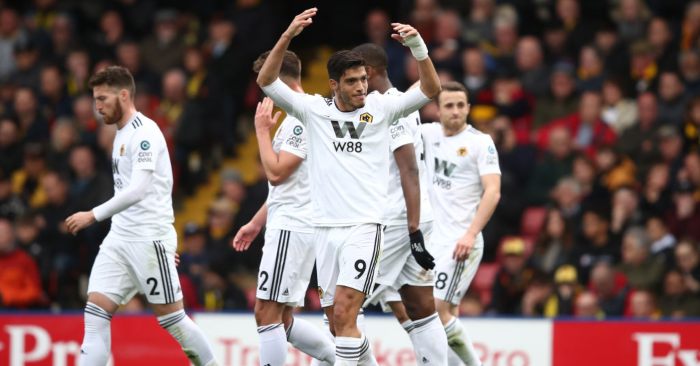 Raul Jimenez might be the most confusing player in the whole of the Premier League. Depending on what mood you catch him in, he can be all manner of things. The dead-eyed finisher, seen at Wembley, at Goodison Park or at Watford. Or the slightly clumsy, imperfect forward who hacked away against Huddersfield and Crystal Palace and who, on those days, tried to overcome falling confidence with sheer force of will. Keep running, keep shooting.

Perhaps the Jimenez contrast was at its most striking in that FA Cup tie against Manchester United, in the seconds before Wolves took the lead. Three clanking touches, each one worse than the one before, and then a smart pivot and lethal hit which gave Sergio Romero no chance at all. Jimenez isn’t a game-to-game player, but a moment-to-moment anomaly, capable of changing the perceptions around him, for better or worse, with every touch he takes.

Raul Jimenez with probably the most important goal of the season! Helps Wolves beat Manchester United and advance in the FA Cup!!

The application never seems to waver, though. He is one of the most industrious forwards in the league and was at the root of so much that was good about his side in 2018/19. More than anything else – more than the goals and assists – the impression Jimenez left last season was that of a player who really, really wanted to succeed. That’s easy to believe given his history. He was a failure at Atletico Madrid, lasting just a single season. In three years at Benfica, he never reached double figures in the Primeira Liga. Most likely, his loan move to England was a last chance in Europe.

At times, you could see him fighting that battle. Wolves are a newly affluent club with big, big dreams, and in that situation the life of a hired gun must feel very temporary. Deliver or go, score or be replaced by someone brighter, better and more expensive. For a time, every one of Nuno Espirito Santo’s post-game press conferences seemed to come with a question about Jimenez’s future, as if this was a week-to-week decision which could be determined by a single game. Santo would play his straight bat and into the next week it would go.

Whether that was truly the case or not, Jimenez played like it was on his mind and, subtly, that provided one of the more compelling storylines of the season. Every missed chance contorted his face with private agony, every goal seemed to be worth more than just a change in the score. It was fascinating to watch. Jimenez so clearly loved where he was in the world and was so determined to hold his position, that his fight almost became a common cause. The Molineux crowd loved him and wanted him to succeed. Step inside their world on match day and you found yourself doing the same.

At the end of those battles, he won the war. At the beginning of April, the club confirmed that they had made the loan deal permanent, almost doubling their transfer record by paying Benfica just over £30m. He has the contract now, he has the goals, and he has the club’s Player Of The Year trophy. So what next?

The hope is for more of the same. Another 13 goals of course, but another glimpse of that urgent spirit too. Not just in Raul Jimenez, but Wolves as a team.

Unusually, theirs is a side which has been built with a low pulse. Ordinarily when a club’s financial fortunes turn so quickly, the result is imbalance – players bought out of order and out of sequence. Fosun International are publicly aiming the club at the Premier League’s top four and it’s a surprise that such ambition hasn’t scrambled their senses. Particularly when promotion from the Championship was won at a canter and the first broadcasting payment appeared in their account. There’s always wastage in that situation: a bad attitude here, a player signed for the wrong reasons there. Think of the first days of Chelsea or Manchester City. Or ask Fulham.

When a stated aim exists, typically the temptation is to lunge towards it. Perhaps, with that in mind, the greatest compliment Wolves are due is the recognition that they’ve kept a steady stride. What made them a success in 2018/19 was not the power of the individuals, but their collective attitudes. After all, their individuals aren’t that impressive. Joao Moutinho is excellent and Ruben Neves will be an outstanding player in the future, but Santo is hardly coaching a collection of superstars and by nobody’s estimation did Wolves finish in top half of the table by default. Instead, progress has come through perserverance.

Jimenez embodied that to an extent, but there are all sorts of other examples. The prominence of the side’s wing-backs gave Jonny Otto a stage he relished, Matt Doherty too. But, elsewhere, what of the late introduction of Leander Dondoncker into the midfield. Or Diogo Jota’s month-long benching in the autumn and then his rise into one of the most productive assets in the country. They are all good players, each of whom might have been expected to succeed, but their smooth evolution suggests a deeper health to Wolves and a highly fertile environment.

Of course, Santo has been paid his dues since the season ended. Rightly so, too, because even people who can’t explain why understand that he’s done an excellent job. Quite deservedly, the side was also frequently praised for their performances against the biggest clubs, taking points off five of the top six and knocking Liverpool and Manchester United out of the FA Cup.

But while statistics and results depict an astute coach working with talented players, the extent of the synthesis only reveals itself in person. On some of those dark, wintry nights at Molineux, just before kick-off when the firework cordite would hang in the air and the noise would pound from the stands. What a spectacle. And more often than not, that was the chance to watch a side charged with energy. Not a perfect team, not one which was always successful, but one which gave people their money’s worth with their ability to adapt around an opponent’s shape and focus on their weaknesses. Tottenham at Wembley? What a performance that was. That Arsenal game? A perfect example of how to nullify strengths and expose fragility. Wolves got smarter as the season progressed, they learnt how to beat teams in different ways and, with great testament to Santo, became terribly difficult to prepare for.

That collective development fostered all sorts of minor improvements, too. Visible in Wily Boly’s adaption to the Premier League and how he learnt how to better use his body. Or Neves, who routinely thrived against the better teams, growing steadily more assured that he was one of the best midfielders in the country. And Jimenez, of course, once his future was settled, his internal conflict was over and he began celebrating goals like he expected to score. Maybe it was a trick of the mind, but it always felt like there was something new to notice with Wolves, something different to include in a match report. Like Jota, maybe, and the runs he was making and the way he was carrying the ball. Or even Morgan Gibbs-White, who would step onto the pitch and look immediately at home, glinting with future England class.

The theory is that they are just a few players short. That, with Jorge Mendes pointing them in the right directions, they are a credible threat to the top six. Actually, I wrote exactly that in a piece just a few weeks ago. But maybe that’s to misunderstand their virtues and underestimate how much growing they have left to do? Maybe they’re a threat because of what they have now: all that smart design and energy, but also this great appetite to get better and, like Raul Jimenez, the determination to be the ones who take Wolves back.