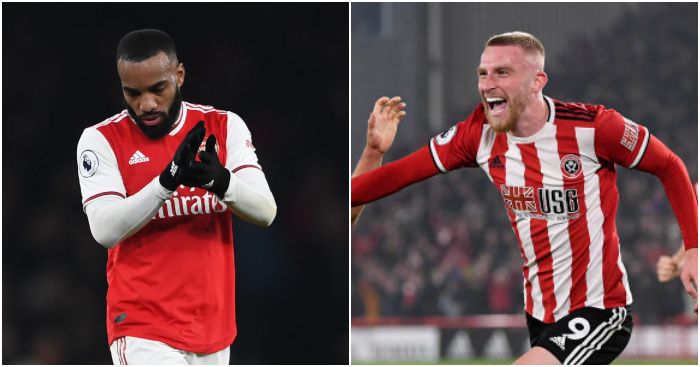 Last Sunday at Bramall Lane, at roughly 6:16pm local time, Oli McBurnie of Sheffield United scored in the 90th minute to secure a draw with Manchester United. He sprinted joyously in the general direction of the corner flag, soon after joined by several teammates in a spirited celebration.

A little more than 24 hours before, at the Emirates, Alexandre Lacazette of Arsenal had scored even later to equalise against Southampton. He didn’t celebrate at all. He just bent over and looked at the ground. Only one teammate congratulated him, and Lacazette had to be reminded to run back to the centre circle in the hope of an unlikely winner.

Thousands of words could be written about the contrast, and what it says about the state of their respective clubs. I’ll try a paragraph or two later on. But first we need a closer look at The Goal Celebration, that delectable icing on the football cake.

Type ‘goal celebration’ into YouTube, and you get something like a trillion hits. It’s no surprise. The goal celebration, strange, simple or silly, carries an endless fascination. Goals are hard to get, so every one is special, and deserves to be marked in a special way.

The choreographed celebration is a perennial favourite, because it’s limited only by our heroes’ imaginations. Anything is possible. My personal list includes Finidi George marking his territory, the robot dance of Peter Crouch, Son Heung-min and Dele Alli signalling their Martian overlords, and perhaps the most inventive team effort of all time: Stjarnan FC catching a fish. I’m sure you have ones of your own – please do put them in the comments.

The problem with choreographed celebrations, though, is that they’re choreographed. They’re planned well in advance, so lack an emotional edge. Even in Iceland you need more than inventiveness to carry you through the long season. Or, going back to the cake metaphor, there’s only so much fancy icing you can take.

The obverse of the choreographed celebration is the trademark celebration: instead of the surprise/wonder at what they’ve cooked up, there’s the satisfaction of knowing what comes next. Among notable examples are Ellen White with her glasses, Xherdan Shaqiri posing with arms folded, and if you can bear to watch it, Daniel Sturridge’s body falling apart in fifteen different directions. Todd Cantwell of Norwich City does a disorienting shimmy of sorts by the corner flag.

But the point of the trademark celebration is that it’s the same every time out. It’s like listening to one of the great oldies: nice and reliable, even beautiful at times, but it can’t quite give us that unique, ultimate thrill.

So what gives us that thrill? Ask Marco Tardelli. His celebration from the 1982 World Cup final is the most famous, most iconic of all. Go and watch the video. The camera is on him for only seven seconds, but it’s enough to capture the joy, disbelief, and utter out-of-his-mindness brought on by the event.

That’s why the greatest celebrations are the most spontaneous. The last time I scored a goal in a competitive fixture was 1972 (and don’t think I don’t remember it perfectly), but when a scorer celebrates spontaneously, I know exactly what they’re feeling. That’s the magic word: ‘feeling’, the quintessential human experience, one which we so often long to share.

That’s an argument against VAR, by the way. If you don’t know whether to celebrate, what’s the point of scoring at all? Luckily it didn’t stop McBurnie, and he got in a second, less spectacular celebration when the replay confirmed the goal.

That’s also why it’s so frustrating when someone scores and, even without VAR, can’t go berserk. Can you believe poor Brandon Williams? Born in Manchester, only 19 years old, scores his first senior goal for Manchester United – and a stonker it was – but because his team is still behind, all he can do is run back to his position. I hope when he got home he went full Tardelli in his living room.

These days most of the spontaneous celebrations involve the slide or the leap and fist pump, but occasionally you get something more revealing. Last weekend we had a beauty from Lucas Moura after scoring against West Ham: he simply stood, spread his arms as far as possible, and looked to the heavens with mouth wide open, as if to say “Finally! Thank you, Lord!”.

Zero goals in three months will do that to you.

Sometimes you can’t tell if a celebration is planned or spontaneous, and those can be among the most memorable. As Michelangelo must have said at least once, when your art conceals art you’re a true artist.

Had Eric Cantona been planning his ‘Je suis le Roi’ celebration all along? It doesn’t matter. It came off as a spontaneous exhibition of fully justified arrogance. Later he explained it as revenge on Lionel Perez, the keeper, but that hardly detracts from the brilliance of the moment.

Did Marko Arnautovic plan his run, leap into the stands, and scream when he scored his first goal for West Ham United? I don’t know, and I’m glad for it.

Probably the current master of the spontaneous goal celebration is Roberto Firmino. He has a regular repertoire of five or six gestures (my favorite is the heroic pose), but you never know which one he’s going to pull out, and I suspect neither does he. He just seems to do what he feels like at the moment.

So we’re back to feeling, the very heart of the goal celebration – which brings us finally back to Lacazette and McBurnie. What made their reactions so telling is that we had absolutely no doubt what they were feeling at the crucial moment.

Lacazette? He’s an excellent player at a club that at the moment doesn’t know it’s arse from a hole in the ground. They’re supposed to beat Southampton easily at home, not get a desperate draw they barely deserved. ‘Yeah, we drew, and I scored. So what? It’s so incredibly demoralising.’ That he didn’t immediately run back to the halfway line says he didn’t think winning was even a possibility. It’s also revealing that the one teammate who was seen to hug him was Gabriel Martinelli, 18 years of age and as yet unbroken by the Arsenal experience.

Contrast McBurnie, giving it all he had, joined by equally jubilant teammates. (The cameras also caught manager Chris Wilder with a similarly ecstatic response.) That’s the celebration of a man thrilled with life, thrilled to contribute after losing his starting place. Most of all, it’s the celebration of a player thrilled to be in a club on the up, one that just outplayed a member of the Big Six and got a fully deserved result.

Good for him and good for Sheffield United. But let’s think a bit here. McBurnie’s celebration, as wonderful as it was to watch, was a marker of the Blades’ modest place in the Premier League hierarchy. The day before, Kevin de Bruyne had scored at the Etihad to level with Chelsea, and the celebration was fairly subdued: just a pointed finger, a few exchanges of congratulations, and back to business. For McBurnie it was something wonderful. Rightly so, and I hope the Blades have many such celebrations in their future – but also some that are just matter-of-fact, because they’re no more than you’d expect.

Meanwhile, when you watch this weekend’s matches, lean into the goal celebrations. How many McBurnies? Anything close to a Lacazette? Pride? Relief? Glee? Satisfaction? Every time someone scores, it’s once more with feeling. And we’re all privileged to share.