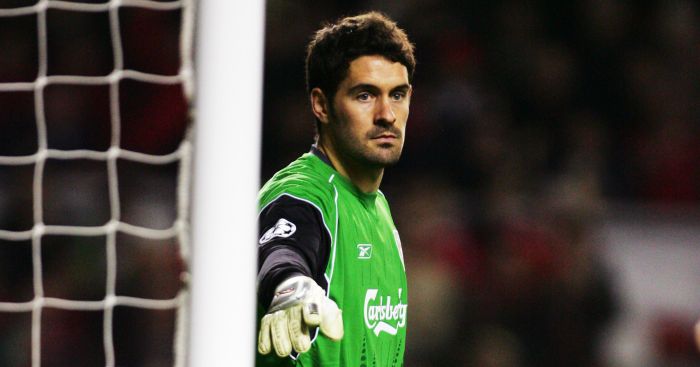 Caoimhin Kelleher made an assured start to his Champions League career on Tuesday night with Liverpool’s victory over Ajax. The 22-year-old Irishman was excellent and definitely justified his manager’s faith. But young keepers have more downs than ups. Just ask these guys…

After a series of early errors, The Times described the 21-year-old as like ‘a kid who won a competition to play in goal for Manchester United’ while Patrick Barclay commented on the same paper’s podcast: “The goalie is like a jelly. He isn’t physically capable. He’s Heurelho Gomes without the shot-stopping.”

The Community Shield against the noisy neighbours was certainly an inauspicious start. De Gea looked as wide as Kate Moss. Eventually, the young keeper ditched his liking for tacos, spent more time in the gym and essentially ‘grew a pair’ to deal with Rory Delap’s long throws et al.

“David has stood up as a man,” Ferguson said at the time. “He got a grip of it, he didn’t let it get to him and the boy has improved every game.” Almost a decade on, will Dean Henderson be the new kid on the block?

2) David James
Liverpool acquired David James from Watford in 1992 for a mere £1.25million, just in time to play in the newly unveiled Premier League (or Premiership, as it was known). He quickly acquired the knack of mixing flying saves with a comical ambition to get involved or, better still, run past crosses. Calamity James was a moniker he never really managed to lose, even after 53 England appearances.

In the second edition of the annual seven-goal Liverpool v Newcastle thrillers in 1997, James let Keith Gillespie’s shot squirm under him, raced off his line to be lobbed by Faustino Asprilla and was then nutmegged by Warren Barton. He admitted that he had a problem with consoles: “I was getting carried away playing Tekken II and Tomb Raider for hours on end.”

I remember on the night of the 2016 EU referendum, Nigel Farage conceded more times than David James after an all-night Playstation session.

Gerard Houllier sold him to Aston Villa in 1999, a deal that came about after the keeper had a few jars at a race day with his Liverpool team mates. An inebriated Jamo bumped into Villa chairman Doug Ellis who said: “We’ve lost the best goalie in the Premier League (Mark Bosnich). James responded: “Second best.” It was a swagger he could carry with an Armani shoot but never really on to the pitch…

3) Jordan Pickford
When Everton fished out £30 million to buy the 23-year-old Pickford from his native Sunderland, it was a club record fee. After coming back from the World Cup in Russia with his reputation enhanced, Pickford has hit a roadblock and keeps careering off the tarmac between posting fastest laps. He’s that kind of keeper.

Before Covid hit these shores, the stopper stopped stopping. He had the second-worst figure for percentage of shots saved this season, behind other Euro 2021 (or should we say Euro 2020+1) candidates like Dean Henderson and Nick Pope. The now 26-year-old has got into media fights that he cannot win and is showing signs of that Joe Hart-style freneticism that has led to many slippery moments. Gareth Southgate still loves him though. It is the distribution, you see.

4) Paul Robinson
Robinson was the Leeds wonderkid who joined the academy as a 13-year-old alongside such luminaries as Alan Smith, Jonathan Woodgate and Harry Kewell. His debut as a 19-year-old corresponded with Leeds rising above their station under their sexy manager David O’Leary; they finished fourth in the Premiership and were Champions League semi-finalists in 2001.

Then it all came crashing down in May 2004 after the club were relegated amid a cash crisis, or what chairman Peter Ridsdale described as the cost of “living the dream”. Robinson conceded 75 goals that season.

When he left for Tottenham in the same year, his aura began to dissipate. For the national team, he was publicly crushed on a miserable night in Zagreb in October 2006 when a Gary Neville back pass bobbled in front of him. Robinson swung a boot and missed.

“I was the best keeper in England. Then suddenly the worst who’d ever played.”

5) Loris Karius
Liverpool bought Karius as a 22-year-old from Jürgen Klopp’s former club Mainz in £4.7m in 2016 to increase the competition with Simon Mignolet. It certainly increased a convoluted kind of competition – essentially one that revolved around who would drive more Liverpool fans behind the sofa.

Karius actually spent time with Manchester City as a teenager and had good numbers with Mainz the previous season but that counted for nowt. He might as well have been the reincarnation of David James. Every decent performance and fancy save was followed by a flap and insecure technique. Ultimately, his Kiev nightmare against Real Madrid in the biggest club game in the world was the siren to the alarm bells that had been ringing all season.

“It’s tough to win the league without a good goalkeeper, it is tough,” Gary Neville said at the time. “He’s not good enough that goalkeeper.”

Karius bit back hard at GNev but couldn’t back it up with an improvement in performances. Klopp failed to find any more excuses. Not even concussion. Alisson was bought and Karius was shipped off to anything but Turkish delight in Besiktas.

6) Kepa
In August 2018, Chelsea broke the world record transfer fee for a goalkeeper by signing 23-year-old Kepa Arrizabalaga from Athletic Bilbao for a whopping £71.6m on a seven-year deal. The Blues are already getting the seven-year scratch after the Spaniard has failed to provide any real certainty or barrier between the sticks. The portents were bad from his debut against Arsenal under Maurizio Sarri when a Henrikh Mkhitaryan shot squeezed in at the near post. Kepa’s general lack of presence was undermined further by a total collapse of the feisty spirit that saw him refuse to be subbed in the 2019 Carabao Cup final shootout against Manchester City.

His inability to keep out shots that don’t look like they should nestle in the net contributed to a 127th placement out of 132 across Europe at one point. Edouard Mendy’s confidence and clean sheets mean that there is no easy way back.

7) Wojciech Szczesny
“Every good goalkeeper begins at 18 or 19,” Arsene Wenger said on the decision to pick Szczesny for a Premier League debut at a red-hot Old Trafford as a 20-year-old.

The Pole in the goal stated his ambition to be Arsenal’s number one for 15 years. When he was good, he was very very good. His Champions League entry was in a tasty 2-1 win over Barcelona but days later his hesitancy lost the Gunners the 2011 Carling Cup final against Birmingham. Inconsistency crept in, as did rather unhelpful fiery parent syndrome. Father Maciej, a former Polish international, lambasted Wenger when his son was dropped.

The final straw was when was when Szczesny, a regular smoker at the time, was caught lighting up in the Arsenal dressing room shower after the Gunners lost 2-0 to Southampton on New Year’s Day in 2015. His subsequent loan to Roma began a much more enjoyable Italian adventure that has yielded three Serie A titles at Juventus.

8) Angus Gunn
He’s got the “eritage” as Jose would say. The son of former Norwich stopper, Bryan, Gunn had to be patient at St Mary’s after a £13.5 million move from Manchester City. The arrival of Ralph Hasenhüttl saw him handed his Premier League debut against Chelsea at Stamford Bridge in January 2019 where he kept a clean sheet.

“I am very happy with him,” Hasenhüttl beamed after the game. “It was important for me to see what we had in the goalkeeper position and that was an amazing step for him.”

The 24-year-old then became a regular and started the first 10 games of the 2019/20 season, including the 9-0 pasting by Leicester.

He was dropped immediately after that trauma, slipping down the Austrian Alps of Ralph’s priorities and giving way to the clean-cut Alex McCarthy. Gunn secured a loan move to Stoke to replace Jack Butland last month, but has since suffered ankle ligament damage which could keep him out until 2021. When it rains…

9) Chris Kirkland
Liverpool signed Kirkland at the age of 20 from Coventry, on the same day they bought in Jerzy Dudek from Feyenoord in 2001. Gerard Houllier challenged him to push the Pole in the goal: “Chris has the potential to reach the top level with England. He is a good shot stopper and is good at getting down for a big keeper. These days talent does not wait.”

Unfortunately, Kirkland’s longest spell as number one was for a couple of months in 2004, which at least included the memorable Gerrarrrrrrrd Olympiakos Champions League game. In 2005, Rafa Benitez brought Pepe Reina and that was the end of life at the very top: “He told me he didn’t want an English goalkeeper in goal and he was going to buy a foreign goalkeeper and I could leave.”

Serious injuries to his hand and knee restricted Kirkland to 25 Premier League appearances for Liverpool and one game for England. The latter at least pocketed his dad about 10k for a wager his son would get a cap before turning 30.

10) Scott Carson
Carson made his CL bow on an emotionally charged night at Anfield against Juventus in 2005. Liverpool won 2-1 as the teenager made a brilliant save from Alessandro Del Piero in the last-eight tie but misjudged a Fabio Cannavaro effort to let the Italians back in. Carson recalled: “I went too early for the [Cannavaro] header, and it’s gone in. Luckily there was no social media then, so I got off lightly…”

Carson only made four league appearances for the Reds and, Rafa being socially distant, there were no hugs either. Benitez would sometimes tell him just an hour and a half before the game that he would start.

He will sadly be remembered for an international debut against Croatia in November 2007, fumbling Niko Kranjcar’s long-range shot into the net after just eight minutes as Steve McClaren looked on with a golf umbrella. Euro 2008 was out of bounds as England lost 3-2.