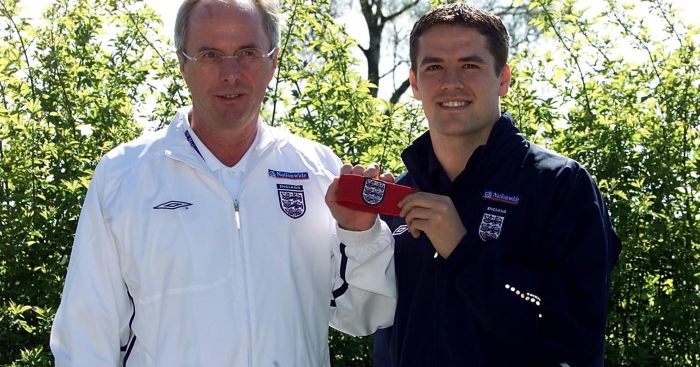 Fabian Delph is about to captain England against the USA. He has started ten games for the Three Lions. That isn’t very many. But is he the most questionable captain we’ve ever had? The countless players, like Phil Neville and Emile Heskey, who’ve taken the armband during a game haven’t been considered because, well, everyone’s done it…

Joe Hart
The goalkeeper was fourth in line for the armband when it was passed to him for the friendly against Spain in 2015. Wayne Rooney and Gary Cahill were both rested and Phil Jagielka was injured so it fell upon Hart to bring his own kind of leadership style to the role.

Just picture all the chest-beating and geeing-up before England took to the field to chase the hosts around Alicante. Hart was handed the captaincy again in similar circumstances in March 2017 when Gareth Southgate stopped the music on his game of ‘pass the armband’ when it dropped into the then-Torino keeper’s lap before his 70th cap. A year later, Hart couldn’t get near the squad, let alone the captaincy.

Michael Owen
The England forward had already become the second-youngest England captain of all time when he led out the Three Lions at Anfield for a friendly against Paraguay in 2003. He had little previous experience: “I captained Liverpool for five minutes away in Valencia. Paul Ince and Steve McManaman were captain and vice-captain that day, but both were sent off. I sprinted across the touchline to get the armband. Apart from that, the last time I was a captain I was 10 or 11.”

He acted as David Beckham’s stand-in on eight occasions. Six times while at Liverpool, once as a Real Madrid player, and once more when he was at Newcastle, when the centre-forward began phoning it in. With Sven as manager and Owen as captain, it’s hard to imagine a less assertive dressing room anywhere in world football.

Eric Dier
Tottenham midfielder Eric Dier has captained England on five of his 36 appearances, during which time we’ve yet to conclude what it is that the 24-year-old actually does.

Dier steered the England ship safely to a 1-0 victory against Switzerland in September, representing his first win as captain. His previous four run-outs with the armband ended in goalless draws with Germany and Brazil, as well as a stalemate with Italy in March and a 1-0 defeat to Belgium in the final group game of the 2018 World Cup. Somehow, a run of five results under his leadership where no side scores more than one goal at any point feels rather apt.

Chris Smalling
Jose Mourinho reckoned Smalling was one of six players better qualified than Paul Pogba to be Manchester United captain before relenting and offering the France World Cup winner the armband in lieu of an olive branch. It hasn’t worked…

Smalling had captained United previously but it still stuck in the craw of many when he led out his country for the friendly against Australia at Sunderland prior to Euro 2016 to become the sixth different Three Lions skipper during that season. Presumably he’d worked on his ceremonial duties before greeting his Aussie counterpart…

Chris Smalling going to have this on his mind for the rest of the night 😭 pic.twitter.com/Pu5YBqElvM

Scott Parker
The then-Tottenham midfielder was the reigning Football Writers’ Player of the Year when he was given the England captaincy for the friendly against Holland at Wembley in 2012. He had only won 10 caps before being chosen as caretaker boss Stuart Pearce’s skipper ahead of Steven Gerrard.

Many, including Gary Neville, presumed the choice of Parker over Gerrard signalled that the Liverpool skipper would not be playing but, presumably seething, he followed Parker out of the tunnel and partnered his captain in midfield. It seemed a questionable choice but it left Joey Barton “speechless”, which is always a good thing.