Home F365 Says Why is the Carabao Cup taking place at all?

We love the Carabao Cup...but not in 2020 when it brings genuine danger. Just give it to City. 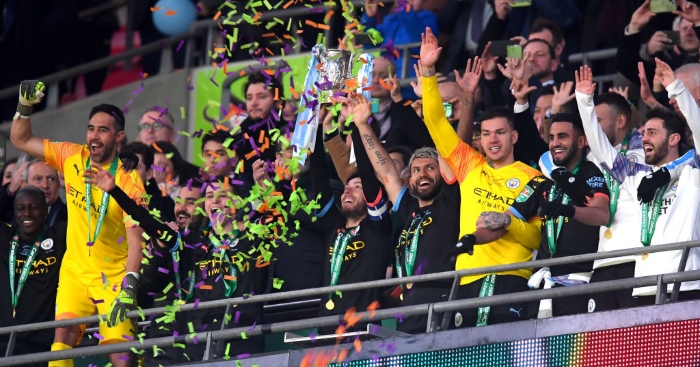 That said, it’s absolutely ridiculous for the Carabao Cup to be going ahead this season. On Tuesday night the competition descended into actual farce and, worse than that, became actively dangerous.

At West Ham we had the truly ridiculous situation of a game going ahead despite a Covid-positive David Moyes wandering around the stadium for an hour beforehand.

And at Leyton Orient we had a lower-league team so thoroughly desperate for cash – which is clearly a huge problem the game as a whole is going to have to address one way or another – that its chairman went on national radio with a straight face to insist their game against Spurs could go ahead despite Orient recording 17 positive tests.

Those tests, incidentally, were not mandated by the EFL who run the League Cup, but paid for by Spurs. Had Tottenham not insisted on such a measure, the game would have likely gone ahead, just as Orient’s league match against Mansfield did at the weekend; we await the fall-out from that one.

Had Spurs played a rona-riddled Orient, the ramifications could have been huge: infection running rampant through their squad would have ended their Europa League campaign and placed the continuation of the Premier League season in doubt. Football in this country below the top couple of tiers is in a desperately precarious position because of the current pandemic, but, as in wider society, there still does seem to be some complacency about how fragile everything currently is.

There are no guarantees – there is arguably not even a likelihood – that this season is completed without interruption, while the return of fans looks further away than ever.

For that reason alone, scrapping the Carabao Cup this year would have been a sensible precaution, freeing up some much-needed real estate in an already crammed fixture list.

And while squad rotation is par for the course in the Carabao, its cancellation would also have given a bit more recovery time to all players in what is going to be an unprecedentedly difficult and draining season anyway.

More than that, the Orient situation has highlighted another danger. Premier League teams are subjected to round after round of testing to keep the show on the road. The prohibitive cost of this means it is not being insisted upon lower down the leagues. Exposing the Premier League teams to the less-secure bubbles at lower-league clubs is dangerous for both the competition and from a health and safety viewpoint.

As for what happens next, the rules for this year’s competition are quite clear. Orient are out. Although nobody was willing to use either the word ‘cancelled’ or ‘postponed’ about the Orient-Spurs game, the rules say it must be the former. Spurs’ reluctance to play a game against a club suffering a covid outbreak is not, as certain journalists would like you to think, just another typical big-club flex to try and bully a smaller team. It is entirely sensible – necessary even. We should be hugely grateful that Spurs stumped up the cash for the Orient testing; it will hopefully help contain their outbreak, protecting other members of Orient’s staff, and prevent it spreading to even more clubs.

Orient chairman Mark Travis’ response this morning, though, was to regret having agreed at all.

“If I was doing this again I would not do the testing,” he told BBC Radio 5 Live. “This is an incentive not to test and that is bad for football and bad for health and safety.”

Whatever the financial implications for the club, just stop and think about that. It is a ludicrous position to hold. It is genuinely Trumpian: if you deliberately don’t discover the extent of the problem, you can just pretend it doesn’t exist.

The unfortunate but necessary decision to throw Orient out of the competition is nobody’s idea of a good result, and in his arse-backwards way Travis is right that it presents an incentive not to test. But only if your priorities are totally wrong. And if the incentive is there to conceal possible outbreaks, better surely to just remove it altogether by not staging the competition.

There are major implications for TV deals and, clearly, club finances from such a decision. It is not straightforward, and no easy solution presents itself to such a difficult situation. But the possible damage the Carabao Cup could cause to this season – indeed, may have already caused – is worse.

There is an irony here that Orient and Spurs are two clubs with a very solid relationship. Many Spurs youngsters have enjoyed loan spells at Orient, including Harry Kane, who is now quite literally the club’s shirt sponsor.

Very proud to announce that I'm supporting the club that gave me my first pro start and three amazing causes by sponsoring @leytonorientfc's shirts for the 2020/21 season. pic.twitter.com/hTh1M7xNf3

A row between the two clubs would be particularly unseemly, but their closeness also offers the potential for a sensible solution to be worked out on the fly. The next tie to suffer this fate might not be so lucky. As ugly a prospect as it seems, teams might not be so forthcoming with testing that is not mandatory having seen where it’s left Orient.

So just cancel it. Award the cup to Manchester City, who all joking aside win it every year anyway, and get them to bung a few quid to all the lower-league clubs. It’s a better option with fewer downsides than the status quo.