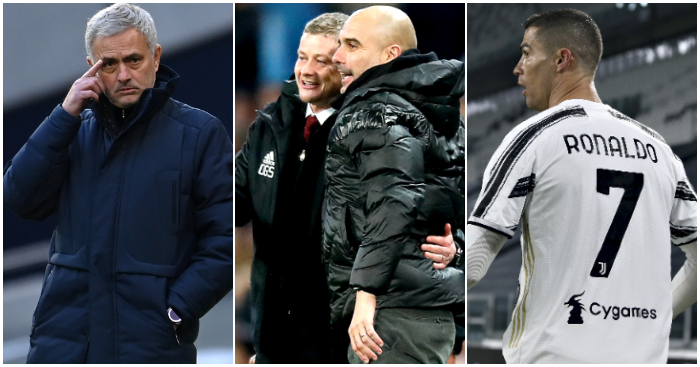 Game to watch – Manchester United v Manchester City
It’s a cup semi-final, we have to get a result one way or another, so there’s little possibility of United and City effectively shaking on a draw before cowering in their halves for 90 minutes, like the last Manchester derby at Old Trafford last month. If by chance there is a repeat, there is an appealing alternative listed below.

But, to be fair to Pep Guardiola, the City boss had been spooked prior to that derby; City had already been picked off by counter-attacking sides Leicester and Tottenham, so to go for United’s throat would have been naive in the extreme. The fact he lost the previous two derbies can’t have helped.

And that was before United suddenly remembered how to win a game by means other than hitting opponents fast and hard on the break; you can insert your own joke about penalties here. But the fact is, United are purring right now, and City have got their groove back too.

This game should serve as compensation to those of us who sat through last month’s stalemate while contemplating our life choices.

Manager to watch – Ole Gunnar Solskjaer
“I am pretty sure Ole is happier than me,” said Guardiola this weekend, and the City boss is right. Right now, the only people happier than Solskjaer are… nope, no one. Mikel Arteta, maybe.

Just imagine his beaming little face if he ends his semi-final hoodoo on Wednesday night. Under Solskjaer, United went to three semi-finals last season and f*cked them all. Reaching his first cup final while sitting on Liverpool’s coat-tails at the top of the league would leave Solskjaer with scarcely-believable security when you consider that a couple of months ago, he was for the chop.

So this is a big one for the United boss, who happens to have a solid record against City. He’s won more than he’s lost in six meetings with Guardiola and City haven’t breached United’s defence in three games. But the last time they did should serve as a warning. One day short of exactly a year ago, City humped United around the Old Trafford park for 45 minutes while building up an unassailable lead at the same stage of this competition. Back then, in a pre-Covid world seemingly many years ago, United almost turned it around in the second leg but it was City who went on to win the trophy again.

Back then, Solskjaer’s spine consisted of Phil Jones, Andreas Pereira and Jesse Lingard, which highlights the difference between then and now. One has gone and two are going. Even if United make changes, as is customary in the Carabao, they can do so without weakening their side in almost every position. And with the new-found enthusiasm in the United squad, every player is champing at the bit to seize their chance.

Of course, this is United. Solskjaer’s United, who have made a habit of shooting themselves in the foot. The feeling is that things are different now, but we await definitive proof.

Team to watch – Tottenham
In contrast to Solskjaer, Jose Mourinho loves a semi, especially in this competition. Mourinho has won the League Cup three times, twice with Chelsea and again with United, putting him in the same bracket as Sir Alex Ferguson and Brian Clough. As Tottenham bid to end a 13-year trophy drought, he knows their clash with Brentford is not one to take lightly.

“I think it is my biggest game since coming to Spurs,” he said in the build-up to Tuesday night’s meeting at White Hart Lane with the Championship side. Not that Mourinho will see Brentford in that light. The Bees have as many wins this season against Premier League opposition as Burnley, and more than Brighton, Fulham, West Brom and Sheffield United.

With what is at stake, Mourinho would have been loathe to rotate and the timing of this semi-final means he need not worry about tinkering with his XI. The time for that comes next weekend, when Spurs go to Marine in the FA Cup. So the Bees will face a Spurs side as strong as Jose can muster.

🗣"The club has been chasing silverware for many years, I would say so"

Player to watch – Ivan Toney
Brentford, though, have rotated all the way through their five-game run to the furthest stage they’ve ever reached in any major cup competition. Indeed, Toney was rested when Newcastle went to the Brentford Community Stadium a fortnight ago. Surely Thomas Frank won’t do the same again at Spurs?

Toney has been a revelation since arriving from Peterborough to replace Oli Watkins in the summer, but Franks hasn’t started his leading striker against any of the four Premier League sides dispatched by the Bees.

The former Newcastle forward is the Championship’s joint-top scorer having netted 16 times and laid on four assists in 22 games. Peterborough chairman Darragh MacAnthony says Spurs were interested in Toney as a cheap back-up for Harry Kane but a combination of Covid and the concern at Spurs over fans’ perceptions of signing a League One striker ended the discussions.

Given Franks can chop and change for the visit of Middlesbrough in the FA Cup on Saturday, Toney will surely be given the chance to show how he might have fared against Premier League opposition at White Hart Lane.

Football League game to watch – Mansfield v Salford
Slim pickings in the Football League as the EFL gets dolled up to host the big boys in the Carabao Cup. But before he gets to work on Wednesday’s derby, Gary Neville has a trip to Mansfield to fret over.

It cannot have escaped anyone who watched the latest episodes of ‘Class of ’92 – Full-Time’ over Christmas rather than talk to their family, just how badly Neville wants his club to move up another level as quickly as possible after an enforced layover in League Two. They currently find themselves perched just outside the play-off positions, though victory at Mansfield will take the Ammies to a point below the automatic promotion spots.

European game to watch – AC Milan v Juventus
If Fred against Ilkay Gundogan isn’t your idea of fun on a Wednesday night, then surely we can tempt you with Zlatan versus Ronaldo?

The battle of Italy’s two most-decorated clubs takes place at the San Siro with their traditional roles reversed. Milan are blazing a trail at the top of Serie A on the back of a 15-match unbeaten start to the season, while Juve flail around in fifth, 10 points off the Rossoneri.

Milan’s form, though, has only been good for a one-point advantage at the summit, which could be taken by Inter if they beat Sampdoria before their city rivals face Juve. Ibrahimovic is also a major doubt due to a hamstring injury. If Juve are to get themselves back in the title race, this would be an opportune time to do it