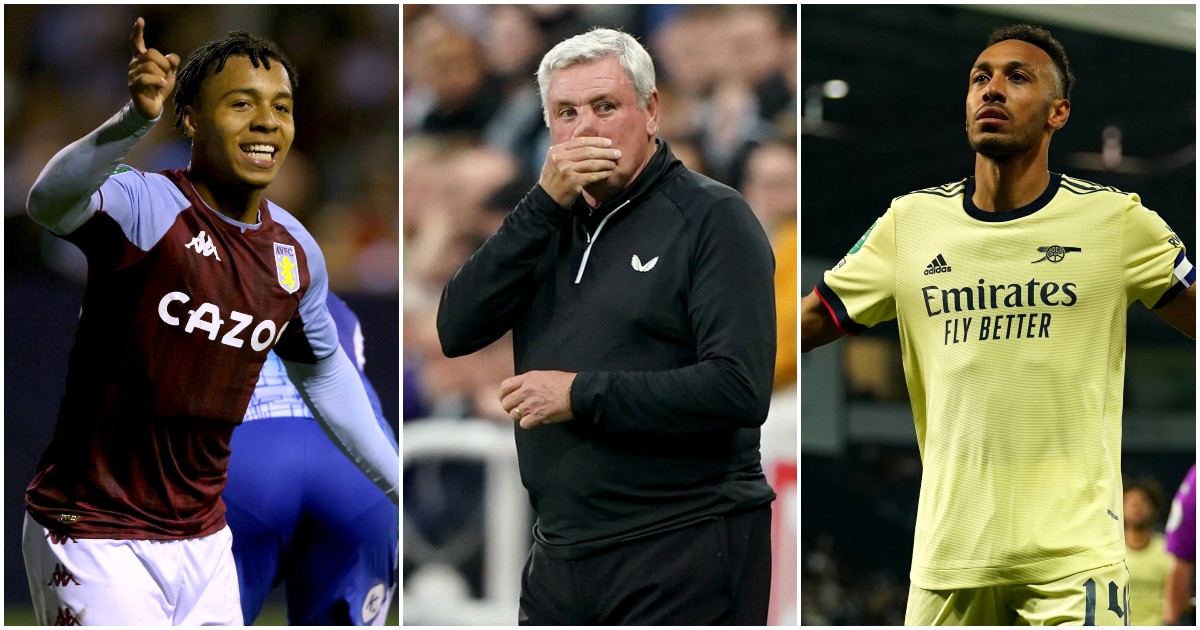 Newcastle wasted yet another chance at silverware, while Pierre-Emerick Aubameyang and Cameron Archer enjoyed their Carabao opportunities.

Norwich City’s second string
Well if you’re looking to make an impact on your manager and stake a claim in the side, there are far worse ways of doing it. Be it debutant Christos Tzolis scoring twice, including a fine strike 12 minutes into his first appearance in English football, or Teemu Pukki back-up Josh Sargent picking up a well-taken and uniquely finished brace, this was near perfection from the Canaries.

Having gone down 8-0 in aggregate across their first two league games – albeit to two rather decent sides in Liverpool and Manchester City – there was perhaps no better reprieve and recuperation than a cup game with far less pressure on the Canaries – and far more chance of sniffing out opportunities. But this was not some fourth-tier ‘fodder’, instead a Bournemouth side with aspirations of a return to the Premier League with Emiliano Marcondes, David Brooks and Ben Pearson in their ranks.

With another difficult but perhaps more winnable fixture coming up at home to recently thrashed Leicester City, more than a handful of players – Tzolis, Sargent, Brandon Williams, Kenny McLean and Kieran Dowell – made anything between solid to spectacular claims for a place in the starting XI. A job well done all around.

The search for the next Jack Grealish
Barrow hosting Aston Villa seemed a good TV pick for a potential upset. A new ground live on Sky Sports was ticked off with a first-ever visit to a fan-filled, fantastically rustic Holker Street in such idyllic surroundings, while a mixed start to the Premier League season for Aston Villa made them potential candidates to be on the wrong end of a bit of cup magic.

It was quickly apparent that this was not to be the case. Despite the raft of changes made by manager Dean Smith, including three academy products starting at the top end of the pitch with the defence and midfield largely made up of established squad players, it was the kids who proved to be more than alright.

With former talisman, boyhood fan, captain and best player to have ever lived Jack Grealish having now left for pastures new with Manchester City, there is room for a new golden boy in town. Carney Chukwuemeka and Jaden Philogene-Bidace both shone – the latter doing well to earn a second-half penalty – but it was forward Cameron Archer who stole the show with a great hat-trick to announce his presence as the potential new hero for the Villans.

Having plied his trade in the National League last season, Archer may well have done enough to earn himself an EFL loan move or to stick around and train with the senior team. Either way, he has written himself onto the tongues and lips of excited fans looking for a new hero to represent them on the pitch. What a night.

Wolves
Having taken approximately 1,368 shots (give or take 1,326) in their opening two Premier League games without scoring, Wolves looked like heading towards a third goalless game in a row under the short tutelage of Bruno Lage. Despite having all the ingredients, the final recipe was still in need of tweaking to get the end product: delicious goals.

But approaching the hour mark at Nottingham Forest, Roman Saiss – of all players – opened the account for the night and the season and his club never looked back. This may have been against the worst team in the Championship so far, but the way in which Wolves pressed, harried, passed through the lines and looked fun once more stood them in good stead for a return to Premier League action. And a return to goals, goals, goals.

Pierre-Emerick Aubameyang
Arsenal needed to take this seriously. More to the point, Mikel Arteta needed to take the Carabao Cup seriously. West Brom made it easy to win by making far more changes and underlining how little this mattered to them. In a way, that made it impossible for Arteta to win in anything other than the scoreline. Anything less would have been a travesty.

But for captain and striker – and the Gabon international proved he is very much still a striker – this was a victory of epic proportions. It is no secret that the former talismanic forward has dropped off incredibly in form over the last 18 months. In his 30s, many doubted he would ever get it back.

A hat-trick against a higgledy piggledy West Brom side made up largely of youth academy players does not make conclusions easy either way, but it could be the launchpad to reignite his Arsenal career – especially if he is allowed to continue to flourish down the centre. At his best, he does it better than Lacazette, Martinelli, Balogun and Nketiah combined.

Southampton
They were one off. Just one goal away from being on the right end of a 9-0 scoreline. That made it so tempting to put Saints in the losers column for not being able to complete the romance, but they just won 8-0 at perennial giant killers Newport. That’s not bad.

Forest Green Rovers’ first half
Leading 1-0 at half time against the Premier League’s latest breath of fresh air, Forest Green continued their excellent start to the season and only wilted in the final half hour of the game against Brentford. Rob Edwards’ side have won plaudits for their results and style of play in the early weeks of the season. On further evidence, they should get used to winning a lot more than just plaudits.

Ashley Fletcher
The summer arrival of former West Ham and Sunderland striker Ashley Fletcher at Watford raised more than a few eyebrows around Hertfordshire and indeed the wider football world. Never destined to be a starter, especially considering the plethora of forward options available to manager Xisco Munoz, Fletcher provided the finishing touch to a moment of quality to make the most of his first start for the Hornets, putting the ultimate sting in the match and dumping Crystal Palace out to endure their miserable start to the season.

Rob. F**king. Dickie.
He’s a centre-back. He’s a very, very good centre-back. That should be enough. But no, now Dickie is forcing the agenda of his own personal goal of the month competition and there’s still another August game to go. Seriously, this guy is going all the way to the top. From a purely selfish point of view, he needs to leave the EFL before I run out of superlatives to describe him.

Sheffield United
Sheffield United’s first win under Slavisa Jokanovic may not have been one for the ages, nor does it erase the problems which engulf the Blades off the pitch, but this was a match between two sides struggling for different reasons in the Championship and despite going behind, the Bramall Lane outfit showed their downtown spirit to win from behind.

A great result in isolation it may not be, but it reflects well on their fight and spirit for the rest of the season against similar opposition.

Newcastle United
Ah, this was all so incredibly, depressingly predictable, wasn’t it? Even as somebody with absolutely zero affiliation to the Magpies, it is wholly miserable to see the club lose another chance at long-awaited silverware without so much as a fight. This is not a criticism of Burnley, who earned their progression after a drab 0-0 every bit as much as Newcastle would have done had they been superior in the spot kicks.

But for Newcastle, it is another wasted opportunity. Steve Bruce did not go exceptionally heavy on changes; he put out a side capable of winning, but unable to do so. It is an all too familiar tale for Newcastle and one which can almost be forgiven in the league, when there is always another chance to quickly make amends.

But without silverware in over half a century now, Newcastle have wasted another opportunity to get within even sniffing distance. The fans deserve far better than that. They can take not finishing in the European places and truth be told, to the fans, there is little glory separating finishing anywhere between 17th and 8th in the Premier League. For a club of this stature, 17th and silverware would far outweigh 8th with none. The Carabao Cup should not only be important to Newcastle, it should have been the absolute priority in at least making it to a position from which they could have a feasible chance of winning it.

Instead, the journey started and ended with Burnley. That really is as bad as it sounds.

Barrow, losing in a win-win situation
When you’re the overwhelming underdogs, it is hard to be the losers in anything but the scoreline, yet Barrow really made a mess of their time in the limelight. Aston Villa may have put out a strong team despite making ten changes, but their most advanced players were all novices at this level of football. Barrow, under unpopular manager Mark Cooper, lost much goodwill owing to the man on their touchline, as did Forest Green in much of their time under the divisive figure.

Barrow did not put up the fight expected of a team in their position with nothing to lose and everything to gain. They somehow came up smelling of anything but roses. It seems an extension of the decisions that have led them to having Cooper in charge. Forest Green saw how much better things get when he is replaced and Rob Edwards is doing a fantastic job with the Gloucestershire side. Barrow would do well to follow a similar path.

Shrewsbury Town
Having lost all four league games without scoring, the EFL Cup provided something of a respite with a penalty shootout victory against fellow League One outfit Lincoln City while scoring two goals in normal time. But in the second round, it was more of the same from the league, going out at home to League Two side Rochdale in an extremely disappointing night in Shropshire.

Before the season began, quite a few had Shrewsbury down as dark horses. It appeared then that people were confusing the romance of Steve Cotterill’s return to the touchline following his battle with Covid-19 with a side capable of promotion. That was unlikely to be the case but the goodwill can only last so long. For Shrewsbury and Cotterill’s sake, you hope better times are on the horizon.

Magic of the (Carabao) Cup
There were nine ties between Premier League and EFL sides this week. The top-flight outfits won every fixture, scoring 40 goals and conceding just two in the process. The magic of the cup clearly does not flow in the bubbles of Carabao.

Newport County
Well, let’s add Newport to the list of clubs making me look a tit this season. To quote:

‘So Southampton have drawn the short straw in drawing Newport County. Maybe you’ll win it next year, Saints.’

Eight goals later and Newport’s giant-killing powers have taken the biggest of hits. Still, on this form, at least they might get to say they did lose to this season’s winners.

Scott Parker’s tie
Right. I could just about cope with the ridiculously highly placed tie clip Bournemouth boss Parker has favoured since his Fulham days, and the skinniest of knots he’s now chosen since switching the capital for the south coast sent me to the brink of breaking point, but not past it.

Scott Parker's message to our fans after a difficult evening.

No longer. This madness has to stop and Parker’s parents must get him dressed for work. There is no other option.