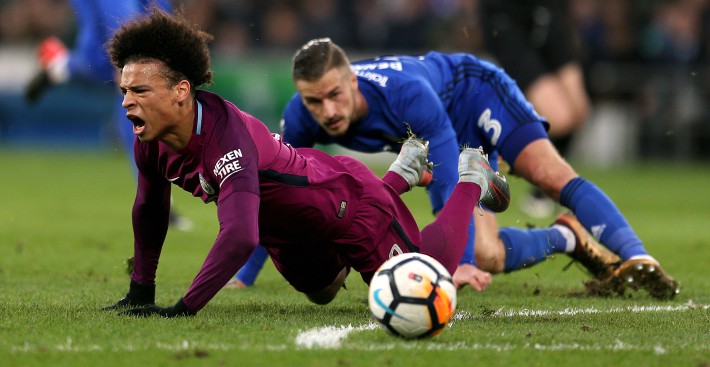 Cardiff defender Joe Bennett heads into a reunion with Leroy Sane admitting he was not proud of the horror tackle which left the Manchester City star injured and his manager Pep Guardiola fuming.

Bennett’s lunge on Sane in an FA Cup fourth-round tie in January left the Germany winger with ankle ligament damage and sparked a war of words between Guardiola and Cardiff counterpart Neil Warnock.

Guardiola went on to the field after the final whistle to complain to referee Lee Mason about Cardiff’s physical style, and the Spaniard later urged officials to do more to protect players from bad challenges.

Warnock responded by saying City also “dished it out a bit” and then accused Guardiola of talking “hot air” after Fabian Delph was sent off in the next round of the FA Cup at Wigan.

The two clubs meet again in the Premier League on Saturday and Bennett, recalling the Sane incident, said: “I didn’t realise how bad it was at the time.

“But looking back at the pictures, it didn’t look great.

“It was a bad tackle and it’s something I wasn’t proud of.

“I apologised for that and moved on quickly. But the criticism did hurt me personally.”

Bennett escaped dismissal for his crude first-half challenge on Sane, but he was sent off in the final seconds for collecting a second yellow card.

Warnock said he reacted to the media storm after the cup tie by “slaughtering” Bennett and blamed the 28-year-old for giving him “three days of hell”.

He also immediately signed another left-back, Armand Traore from Nottingham Forest, but Bennett would regain his first-team place as Cardiff clinched promotion to the Premier League.

“It has made me stronger as a player,” Bennett said of the Sane incident. “I definitely improved as the season went on.

“Now I just want to stay in the team and do well for the manager.”

Cardiff have yet to win on their return to the top flight, but Warnock’s side provided a serious test for Arsenal in their last home game.

The Bluebirds produced some entertaining football before losing 3-2, but Bennett accepts Cardiff’s style of play will remain under constant scrutiny.

“We’ve had criticism about that in the first few games,” he said.

“But we’re not going to change. We know how the gaffer plays and it worked last season.

“We got promoted and we’re going to stick to that.”