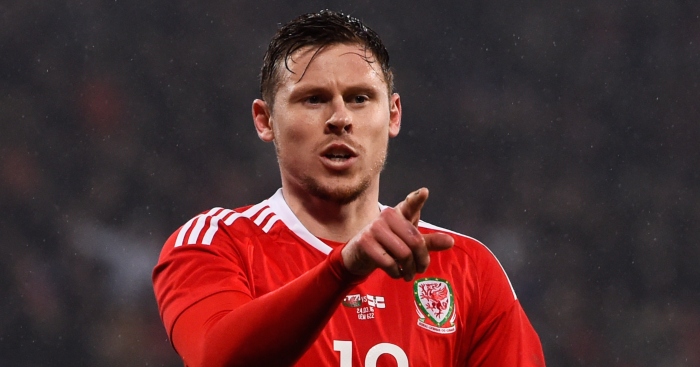 The last major tournament was the pinnacle of Simon Church’s professional life as he helped Wales reach the semi-finals of the European Championship. Like the rest of his career, however, it involved a daily dose of painkillers just to get him out onto the training pitch.

Speaking to Church gives you an insight into the life of a footballer blighted by injury when every day is a struggle to play, to work, to earn. Regardless of long-term repercussions, Church ensured he was always fit and available for his team, despite the toll the game was taking on his body.

The striker came through the ranks at Reading and a hip problem was first detected aged 23, resulting in years of medicating himself to get around the issue.

“From around the age of 23 when I was playing consistently for Reading, I always had slight problems with that region with stiffness and tightness,” Church explains. “I never missed a training session or game through it, though.”

Now 29, Church has had to call it a day. The former MK Dons striker could no longer rely on painkillers to keep him going as the injury was too severe to manipulate through medication. Following the defeat to Portugal in France, Church headed to the Eredivisie where he joined Roda JC.

“I just learnt to manage it with treatment or painkillers. It progressively got worse; I was still getting treatment every day at the Euros and then I moved to Holland where we trained on astroturf pitches and that seemed to accelerate the process.

“I played against Feyenoord away, I took a shot and I remember that I just couldn’t get up, I couldn’t move after that, I lost all my power. The scan after showed I had no cartilage and I had a deformity in my hip.”

The dream of many is to be a professional footballer, so if the only thing standing in one’s way is a manageable pain, then you are going to jump that hurdle without a second thought.

“At a young age, especially, you’ll do whatever you can to get through training and manage it. It wasn’t affecting how I played until towards the end. It was all about pain management – you get into a routine where you rely on the painkillers and when you take them it gets you through the session and you just have to manage it day by day but I think it probably got too much when it masked what was going on and I possibly over-did it.

“Pretty much every day I was training and playing. I would wake up in the morning, take painkillers, train and then after I would take them again and in the lead-up to a game, I’d take them in the morning as well.

“It became a routine and I was reliant on them to get through the day and a lot of players in the professional world are doing that now.”

Now that his sporting days are over, Church is off the painkillers that became part of his life and is instead getting used to the impact years of rigorous exercise has had on his hip and body.

“I’m not relying on them anymore, now when I wake up I can definitely feel the effect of the last 15 years of playing every day and it’s going to take a while for that to wear off. I don’t feel the need to take them now, I’ve kind of got used to the pain that my body is in. I don’t think people realise the pressure and pain you put your body through every day to do what we do.”

Church had surgery while at Roda JC but his rehabilitation did not go to plan, so after a year out he decided a return to England to get his career back on track. Although he had previously failed medicals in the past, it was not an issue at Scunthorpe.

“I did have a few medicals abroad and they were a lot more intense, they found problems with the hip and I didn’t sign on that reason.

“I then felt the only option was to get back playing after a year and a bit out and that’s when Scunthorpe came up, they didn’t really give me a medical, they just looked at my history and asked if all was fine. I went up there, they took a look at me in the day, I trained and they said ‘yeah, we’ll sign you’, so I kind of got lucky with that.”

During four months at Scunthorpe, Church only managed four appearances for the League One club, a sign that his body could not longer cope with the rigours of football.

“It wasn’t until I signed for Scunthorpe that I realised that I kept getting injuries. I felt fine until I started training every day, getting back in that routine and I did struggle with that.”

Eventually in May 2018 after two games in five months at Plymouth, Church decided he had no other option than to retire, less than two years of being part of Wales’ rollercoaster in France, an experience the former striker remembers fondly.

“It was amazing, it’s a bit cringeworthy when you say it’s a dream come true but it literally was. I have two young children and I was away from them for seven weeks and it was one of the best seven weeks of my life, apart from their births. Every single day the whole atmosphere of being involved, the fans you saw along the whole journey, the training sessions, the matches. After that, nothing could really compare to that, unless you play in the World Cup.”

Church pondered whether ending his career after the successes in France might have been the perfect finale but he did not envisage the further complications. Time playing abroad was always one of his ambitions and even though it did not go well, Church has no regrets about his season with Roda JC.

“At the time I never thought there would be an issue with the hip in any way, shape or form and I’d have to retire. After that I had the opportunity to move abroad; we had a few options that fell through while I was at MK Dons and in the final few days [of the transfer window], the option of Holland came up.

“I was 27 at the time and this opportunity might never come up again. In hindsight, was it the right one? We’ll never know but I’m glad I took it and that was probably the defining factor in me being in where I am now.”

The Professional Footballers’ Association and Welsh FA both supported Church as he looked for a life away from the game, which has resulted in him setting up Church Investments, aimed at professional sportsmen looking to invest in the property market. The former Charlton man decided this was the right path after being aided by his own wise moves in the industry.

“I did make a couple of plans just before I had to retire but I didn’t think they’d be coming to fruition now. It wasn’t until I signed for Plymouth and realised that there was a serious issue and that I couldn’t carry on like this, which is what I am doing now with investments for professional footballers and athletes to help set them up for after sport. It has given me a chance in the position I am in now, as without the property income, I might be in a bit of trouble.

“As footballers you get things thrown at you with numbers and you don’t always take everything into account, so we just want to be the ‘go to’ trustworthy people, as someone that’s been in that environment and understands the experience to try and give a platform for trustworthy opportunities.”

Church is used to the ups and downs of football, so the property market holds nothing to fear.