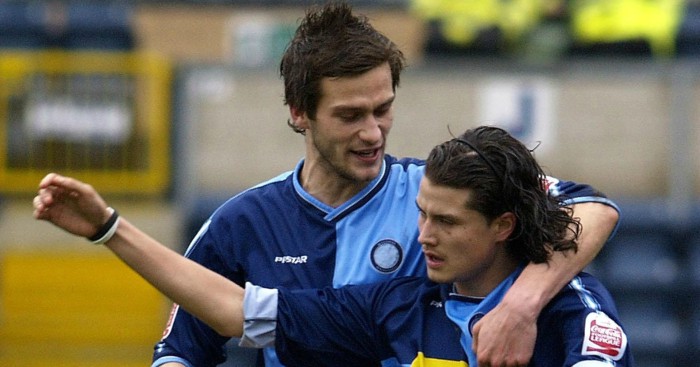 It’s the second of a series of interviews with football’s early retirers. First came Alex Notman, then Leon Mike and now Jonny Dixon…

As CVs go, Brighton & Hove Albion, a League Cup semi-final, Love Island, a gospel choir and a personal reference from Holly Valance is one worth studying.

Jonny Dixon spent six years as a striker at Wycombe Wanderers after coming through the ranks at Adams Park. From the start he was an enigma of a character in the dressing room, writing film scripts and making clothes to sell in Greenwich.

It was always his aim to be a footballer and he knew he had to give the sport he loved a shot, but at the age of 25 and playing for Brighton, Dixon fell out of love with the game and decided a dramatic change was required.

“I turned my back on football a little bit; it seemed how I imagine a divorce would be – there’s a lot of love there but you know you’ve come to the end. It’s a love-hate relationship and you have to move on.

“It came to a point at Brighton where it just felt like I wasn’t happy in what I was doing, I wasn’t really given a chance by the manager at the time and it just felt like there was something else for me, I didn’t know what it would be but I knew I wasn’t happy and then you’re not happy doing what you do then you’re not happy with life, whatever job you do. So for me, I decided it was time to move on and try to do something else.”

The striker had enjoyed a spell at Wycombe under Tony Adams, a man who would not stand for fools as a football manager. A sign of his quality was that Paul Lambert gave him a new one-year deal at the club.

All the time, his team-mates laughed at what were seen as eccentric traits; obviously he should have been thinking about nothing more than sticking the ball into the back of the net. He had an eye for style and even helped fellow Wycombe Wanderers striker Gavin Holligan manage a gospel choir.

“The joke was always that I was the least footballery footballer they knew. I used to cut clothes and sell them down Greenwich Market, I started my own music management company at the age of 19 when I was at Wycombe and I was into screenwriting for films, which is why I am where I am now.”

There was no doubting the talent on show as Dixon became an integral member of the Wycombe squad at a young age, even facing Chelsea in a League Cup semi-final in his final game for the club.

“As a kid I broke into the Wycombe first team when I was just 18, I can remember my full debut at QPR away on Boxing Day and I scored. I’ll never forget that moment. I scored five in seven games. My transition from youth team football into the first team came quite naturally until injury put me out for a little bit.

“I’ve got some good memories, playing against Chelsea in the League Cup and some good times playing at Aldershot Town on loan. I look back fondly at all of my football.”

Dixon moved onto Aldershot in January 2007 as he was determined to make his career as a footballer a success. There he shone, scoring 15 in 39 games for the National League team, which earned him a £55,000 move to League One Brighton in the spring of 2008.

10 years ago this month Jonny Dixon netted in 87th minute to secure 1-0 Aldershot win v @GraysAthleticFC in front of 1924 fans at the Rec pic.twitter.com/v9XN3ZkM7y

He was living the dream of every child he ever plundered goals against as a youth and knew it, but Dixon always had his eye on the bigger picture.

“As a kid that’s all it was really, you play in the playground and when the teacher asks what you want to be it’s always to be a footballer. I always had other interests outside of it, I was quite into other things, but growing up I didn’t see anything other than being a footballer until I became one.

“Before I’d even signed pro there was a part of me that was always evaluating what I was doing. I never really saw myself as an older, ex-footballer coach; for some reason I never saw myself being in the game for that long and I don’t know why that was. I was ambitious and had a strong head on my shoulders, so even as a young lad I was always evaluating my future.”

Injury and a lack of game time saw Dixon drift away from football mentally and plot a career outside of the game. With a year left on his contract at Brighton, he told the club he would be turning his back on football.

“I remember telling the lads at Brighton first, I still had another year on my contract, everyone tried to talk me out of it. I think my dad was the only person who said ‘you’ve got to do what feels right’ and I think it was a massive risk, a massive gamble, one which no one really understood but I think until you’re in a position you’re not happy with what you’re doing, whatever it is you’re doing, you’ve got to change something.”

Dixon’s mind was made up and it was a painful decision, proven by the fact he did not watch a game of football for a further two years. But he was creative on and off the pitch, leaving the ball behind for the music industry before moving into television and film.

He is still prolific working as a producer and director on a number of TV shows such as Come Dine with Me, Jodie Marsh on Mail Order Brides, Sun, Sex and Suspicious Parents, Don’t Tell the Bride and The Valleys – not to mention Love Island – and he has recently completed filming his first motion picture.

“Myself and a friend of mine have been trying to get a film off the ground for about the last seven or eight years since and this is the first one we’ve managed to get funding for, so we’ve been filming for the last six weeks and it’s due to be released towards the end of this year. It’s called Six From Eight and we’ll see how it goes as it’s something I’ve always wanted to do.”

Oh and he dated Holly Valance.

More from Planet Sport: Danny Guthrie: I chose Indonesia over Champ; what else can I achieve in UK? (Planet Football)