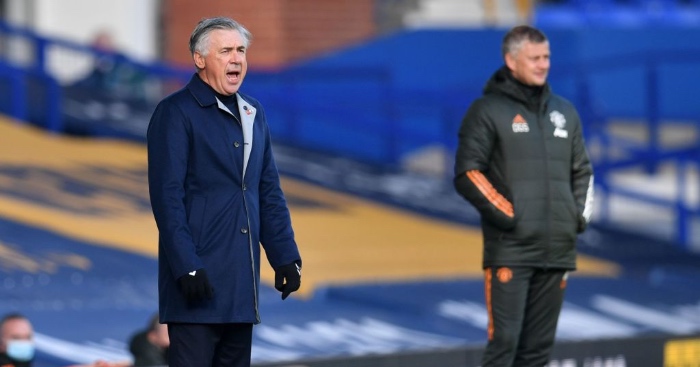 Everton boss Carlo Ancelotti believes his side’s poor defending cost them in their defeat to Man Utd at home.

The Toffees took the lead in the 19th-minute thanks to winger Bernard.

The Brazilian started off as the best player on the pitch and looked good going forward.

The away side soon found their way into the game though. Bruno Fernandes equalised in the 25th-minute with a bullet header.

Ancelotti could only watch from the sidelines as Fernandes drifted between defenders Mason Holgate and Michael Keane.

The amount of space he found himself in will be a cause for concern for the Everton coaches.

Fernandes scored again in the 32nd-minute to put Man Utd ahead.

The Portuguese international crossed a ball into Marcus Rashford, which managed to find its way into the net.

Everton conceded again late in the second half.

They were caught on the break, allowing Fernandes to set up Edinson Cavani for his first Premier League goal.

Speaking after the game, Ancelotti told BT Sport (via BBC Sport): “The problem was that after we scored we were not able to defend well, and they took advantage. They were able to score easily.

“We said before the game we had to defend better and we did not defend good enough. We were slow at the back, we have to improve.

“I hope that after the international break we will be back in a different shape. It is not only a problem of the defenders, it is all of the team.

“I know how to manage difficulties, every year you have them. We can start again after the break, we are really bad at the moment but we started well.”

Everton have slipped down the Prem table after a bright start. They’ve now lost three league games in a row.

They will be hoping to return to form after the international break.