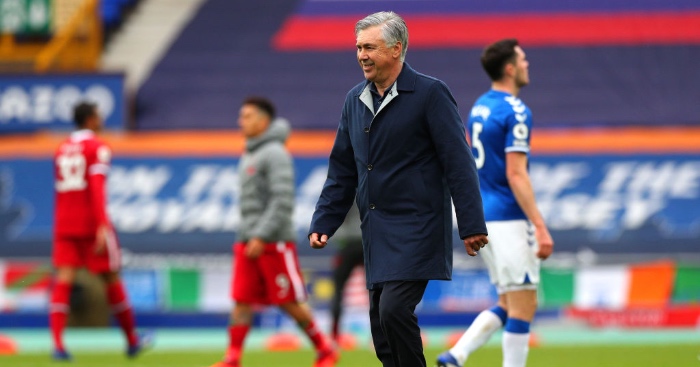 Everton boss Carlo Ancelotti believes his side can have ‘more confidence for the future’ after they played out an exciting 2-2 draw with city rivals Liverpool.

Sadio Mane put the visitors ahead early on before Toffees defender Michael Keane headed in an equaliser in the 19th-minute.

After the break, Liverpool took the lead once again thanks to a clever strike from forward Mohamed Salah. However in-form number nine Dominic Calvert-Lewin scored for Everton in the 81st-minute to give his team the point.

The match was also marred with plenty of controversy after Jordan Pickford seemed to foul Virgil Van Dijk when going for the ball. It was a challenge that could have warranted a red card, but nothing was given as the previous chance was deemed offside.

Richarlison received a red card in the 90th-minute for a poor challenge on Spanish midfielder Thiago Alcantara.

Liverpool’s Jordan Henderson thought he had won the game when he slotted the ball past Pickford in the dying minutes. VAR decided that Mane had been slightly offside in the goal buildup, despite looking onside.

Speaking after the match, Ancelotti said (via BBC Sport): “It was terrific. It was a good game in general. Exciting game. Lot of fight, lot of pressing, lot of intensity.

“It was a good test and I have a good feeling.

“To know we can compete with the champions of the last season it gives us more confidence for the future.”

When asked about Henderson’s offside goal, the Italian manager responded: “I hoped the goal was offside. If we lost my feeling would not have changed.”

By gaining a point at Goodison Park, Everton continued their unbeaten start to the season. They remain top of the Premier League table after having played five games.

Their next fixture is away against Southampton next weekend.