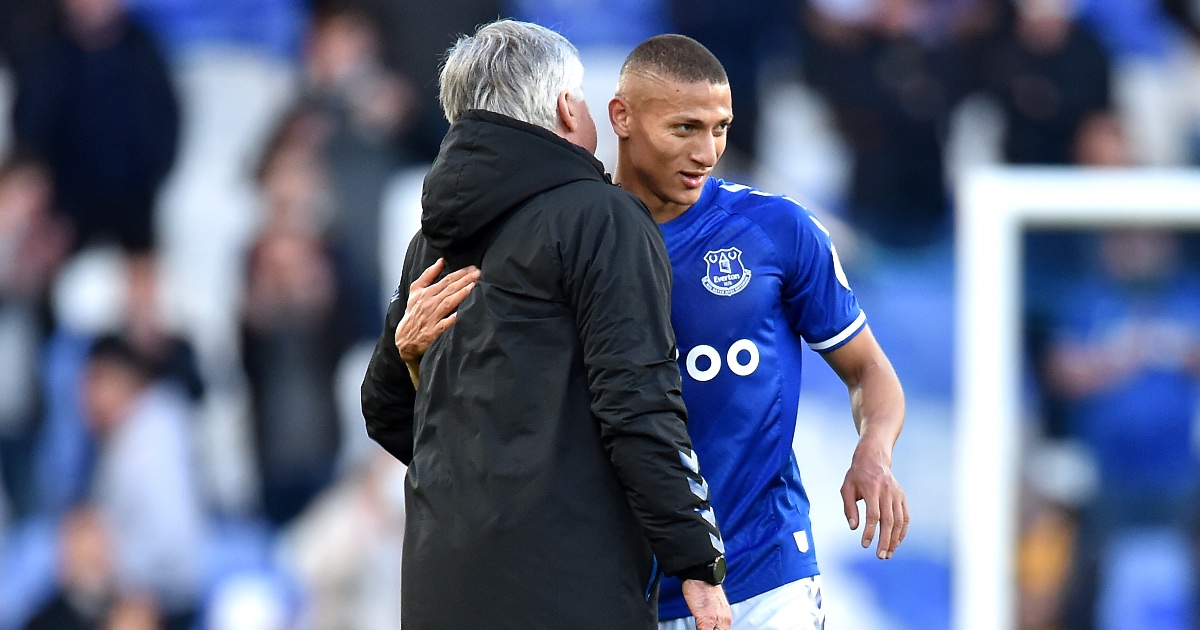 New Real Madrid boss Carlo Ancelotti has reportedly talked with Richarlison over a summer switch to the Bernabeu.

The Everton forward played under Ancelotti during his 18-month spell at Goodison Park.

Last season, Richarlison notched 13 goals in all competitions and was Everton’s second-top goalscorer, behind Dominic Calvert-Lewin.

According to Goal, that form impressed Ancelotti and he is keen to reunite with the Brazilian ahead of the new season.

The manager phoned Richarlison while he was on international duty at the Copa America.

He quizzed the 24-year-old over the ability to make a transfer happen, with talks said to be at a very early stage.

The report also states that a bid could be launched in the coming weeks. Ancelotti will first have to convince Real chiefs on the potential impact of Richarlison.

The forward is contracted with Everton until June 2024, which means the Toffees have no obligation to sell.

They will command a high fee for Richarlison as he’s been one of their top performers in recent years.

He regularly played up front alongside Calvert-Lewin last term. The duo scored 23 of the club’s 47 goals during the Premier League campaign.

Everton officials are expecting Richarlison to return to Merseyside once the Copa America has finished.

Brazil reached the final of the competition with a 1-0 victory over Peru on Tuesday.

Richarlison has already got off the mark with a goal in their group stage win over the Peruvians.

He could add to his tally in the final this weekend. Brazil face rivals Argentina on Sunday morning, with Richarlison pushing to start.

The player started his career with America MG in his homeland. He was snapped up by Fluminense as a youngster, which is where he began to attract attention from scouts in Europe.

Watford submitted an £11.5million bid in August 2017 and were successful, giving him his big break.

Richarlison made his debut for the Hornets in a 3-3 draw with Liverpool. He went on to register ten goal contributions in 41 matches before being signed by Everton in July 2018.

He isn’t the only player to be targeted by Ancelotti in the Spanish capital. The Italian is rumoured to be interested in Chelsea’s Timo Werner, who had a troublesome debut season in England.

However, Thomas Tuchel is a big fan of his compatriot and won’t want him to leave after just one term.