Home All The News Ancelotti: We were looking to secure a draw in Watford win 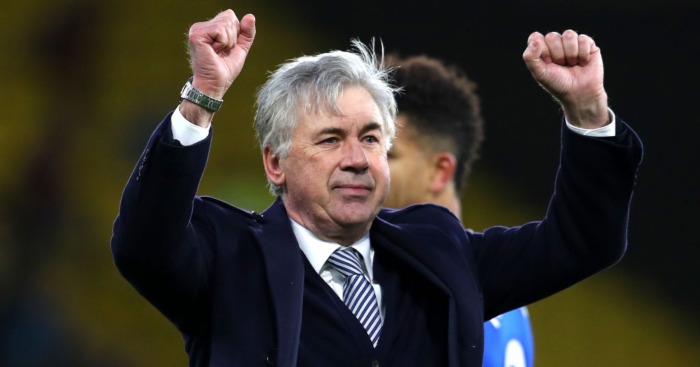 Carlo Ancelotti admits Everton were “looking to go home with a draw” before their late goal in a 3-2 win over Watford on Saturday.

Yerry Mina had scored twice in first-half stoppage time to haul the visitors level and – despite losing Fabian Delph to a red card – Theo Walcott delivered the killer blow as the travelling fans celebrated a remarkable victory.

The Hornets appeared on course for another fine result in their battle against the drop as Adam Masina’s first goal in over three years and a Roberto Pereyra strike had them two goals ahead.

But, having crumbled when falling behind in recent weeks, the Toffees instead rallied at Vicarage Road as Mina struck twice in quick succession.

Ancelotti‘s side looked to be hanging on for a point but broke clear in the closing stages as Watford over-committed, and Richarlison’s pass was scuffed into the path of Walcott by Moise

Kean, with the former Arsenal man making no mistake with the close-range finish.

Ancelotti told BBC Sport: “Football is so unpredictable. We were looking to go home with a draw because we had 10 men but we did a fantastic counter-attack.

“Honestly,we didn’t deserve to equalise in the first half but I think with what happened last week and this week we deserved to win.

“The spirit is really good. We had fantastic support from our fans. We are really happy for them because to win these away games is really good for our confidence.”

On Delph’s red card, Ancelotti added: “I think it was the wrong decision by the referee. I think we were lucky to score at the end. We have to stay focused, improve and be confident because this squad has good quality.”