Home F365 Says Could Ancelotti soar in the Year of the Coach?

Carlo Ancelotti is the man who adds 10-15%. This is definitely the year to be the calm, experienced head. 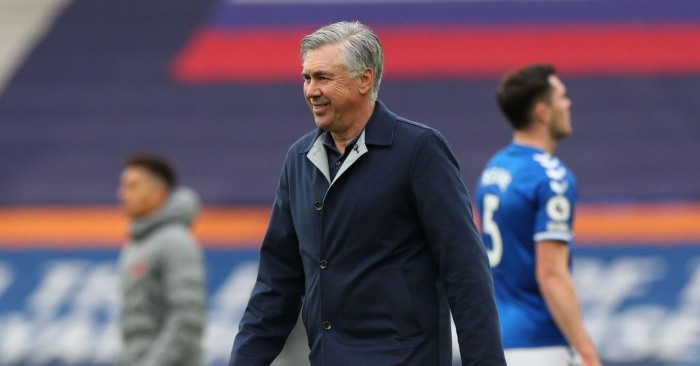 “That’s what a good coach and manager does: they get that extra 10-15% out of the player that even they don’t know they have,” said Paul Clement, who was not drawing on his four months working under Steve Kean at Blackburn, but six years working under Carlo Ancelotti for Chelsea, PSG, Real Madrid and Bayern Munich – four ridiculously accomplished clubs in four different countries who won domestic and Champions League titles under Ancelotti and by extension Clement.

The Englishman is not with him on this particular leg of his journey – he is managing, so far successfully, in Belgium – but he is watching events on Merseyside with interest and very little surprise. He would have predicted that every focused Everton player would get 10-15% better under Ancelotti, a manager derided by some as a ‘chameleon’, as if chameleons are not actually wonderful creatures. While it’s true that Ancelotti is not a coach likely to re-invent the wheel, there are few finer polishers of wheels in European football.

Everton have undoubtedly benefited from the lure of their world-class manager, with James Rodriguez and Allan coming through the door only because Ancelotti was standing at the other side, but there has been no major influx of players even after last season ended damply with just one win in six. Many thought that Everton needed a proven goalscorer as the limited Dominic Calvert-Lewin had clearly hit a 13-goal ceiling; most thought that a senior centre-half should complement a trio who boasted promise but ultimately lacked consistency. Or maybe, it seems, just lacked that extra 10-15%.

This could well be the season of Ancelotti and his ilk, of experienced, calm heads who have seen things and done things and survived things that even this bizarre season cannot touch. “He’s brilliant, really easy going, easy to talk to and has got that authority about him,” said Michael Keane earlier this month. When he speaks, footballers like Keane listen, aware that this is an unexpected and precious opportunity to work with such a manager. When he and others signed for Everton, they would never have expected or even dreamt of being coached by a serial trophy-winner. Many had to be grateful for Sam Allardyce.

Imagine saying that a couple of years ago.

There are obvious comparisons to be made with callow coaches at other, bigger Premier League clubs who have barely managed at this level, and are now being asked to manage fatigued players in a fan-less vacuum at this level. It seems likely that experience will be key but also that very basic notion of being a coach, of improving footballers, that is often lost when you get towards the elite level of the game. Too often fans and clubs look for solutions and then excuses in the transfer market when there are existing players that can simply be improved. Watching Everton draw with Liverpool on Saturday, it was so obvious how much Calvert-Lewin, Keane, Yerry Mina and even Lucas Digne – who was already excellent – have been refined. Only the goalkeeper remains steadfastly unstable and Ancelotti will surely replace him with Robin Olsen before the month is out.

The eye is drawn to Rodriguez because he is a truly magnificent footballer, but there is talent elsewhere in this Everton side. Of all the teams to have played five Premier League games this season, their xGA is the lowest. In laypersons’ terms, that means they are allowing the opposition fewer high-quality chances than any other team. As only Liverpool are creating better chances at the other end, it’s inarguable that their early-season ascent to the top of the table is justified. Only a fool would argue that they could stay there, but only a different kind of fool would argue that they will drop like a stone under such an accomplished manager, who has not finished a full season outside the top three since 2008.

There is plenty to like about this Everton side but all roads lead back to the manager who brought talented players to the Premier League while adding another 10-15% to the players who had previously ebbed, flowed or even stalled. He is the reason why the bookies cannot split them and Manchester United in the odds to finish in the European places. This could be the year of the coach.