Home All The News Ancelotti: Pickford is ‘sad’ and ‘disappointed’ at Van Dijk injury

Speaking ahead of their game against Southampton, Ancelotti said the club hopes Van Dijk recovers well. 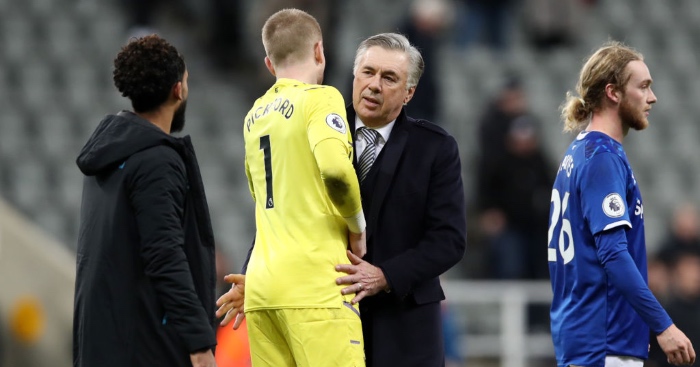 The defender will likely miss the rest of the season after it was revealed he will require knee surgery in the coming weeks.

Pickford was at fault after he dangerously challenged van Dijk in the box, despite the chance being ruled offside.

FEATURE: Will Liverpool return to the imperfect chaos of 17/18?

Speaking ahead of the Toffees’ match against Southampton this Sunday, Ancelotti told Everton FC: “To be clear, we are really sorry for the injury of Virgil van Dijk. Every one of us hopes he can recover soon and well.

“There was this contact with Jordan Pickford: it was mistimed contact but the fact the Premier League is so fast, it is not so difficult to arrive a little bit later.

“It can happen. He arrived a little bit later but his intention was to try to catch the ball. It was not to hurt Virgil van Dijk.

“To say it was pre-meditated and this and that, in my opinion, is too much. Virgil van Dijk knows this. This is football and unfortunately you can be injured.

“Jordan is really sad, really disappointed (Van Dijk is injured) but to say it was pre-meditated, it was stupid, is not fair.

“It was a strong contact, maybe mistimed, but sometimes in football it can happen.”

When asked about his squad’s availability for the match, the Italian said: “Unfortunately, James [Rodriguez] had a problem during the game. He had a mistimed tackle with Virgil van Dijk at the beginning of the game and I think he will not be available for the game against Southampton.”

Everton will be without Richarlison as he starts his three-match ban. Captain Seamus Coleman looks set to miss the next two or three matches through injury.