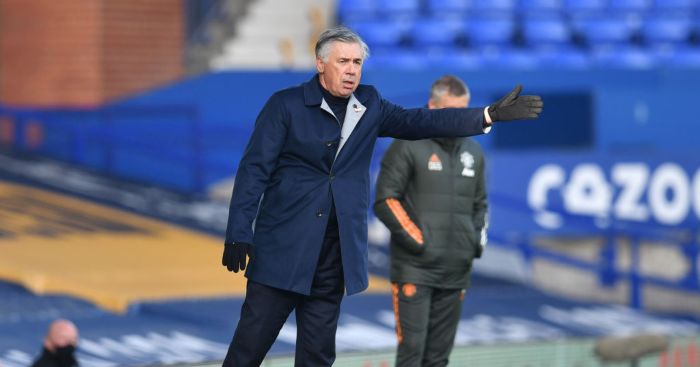 Everton manager Carlo Ancelotti insists their recent problems have been down to defensive issues and not the absence of Richarlison.

The Brazil international served a three-match suspension immediately prior to the international break and the Toffees lost all three, conceding seven goals.

Everton have yet to win in the Premier League without Richarlison since he joined in 2018 – drawing four and losing four of eight games.

But Ancelotti laid the blame firmly at the back door, where he has demanded a huge improvement.

“We didn’t lose because Richarlison was not there,” said the Italian.

“If he was a defender, I can say, ‘OK we lost power in defence’. He is a striker and the problem we had was, we didn’t defend properly in the past three games.

“We want to have a reaction, we want to come back to play well as we did at the start of the season.

“There will be pressure on us and there has to be because we didn’t do well in the past three games.”

However, the problem Ancelotti has had is that he has had no chance to work on defence while players have been away with their countries.

He is hoping to cram in his tactical tweaks in the time he has left before Sunday’s noon kick-off at Fulham.

“We trained with four or five players during this break so we didn’t have the opportunity to reset,” he added.

“But we have two training sessions before the game, we will try to do our best and defensively reset the team.

“We have to try to work in those two days, to explain the mistakes clearly, with video sessions tomorrow and before the game.

“We have to defend differently. We have to be more aggressive and more compact and have more concentration and try to work together.

“You have to work on this on the pitch but you can switch your mental aspect defensively and also improve by talking about it.”