Everton boss Ancelotti has praised his side after they continued their winning start to the season. 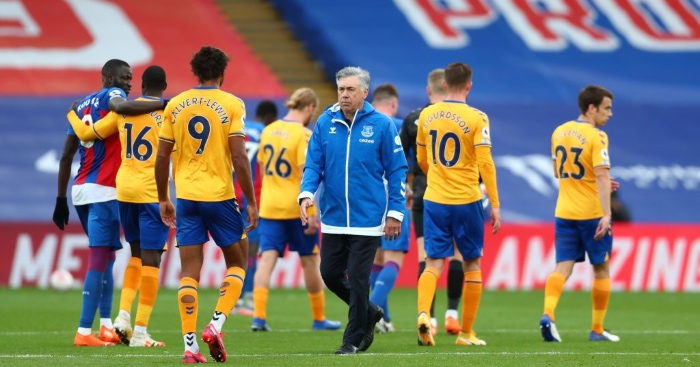 Everton boss Carlo Ancelotti has praised his players’ team spirit after their 2-1 victory over Crystal Palace at Selhurst Park.

The Toffees started the game strongly and went ahead ten minutes in thanks to top goalscorer Dominic Calvert-Lewin.

However, Roy Hodgson’s men were soon equal after Cheikhou Kouyate was allowed too much space in the box. The Senegalese international converted Andros Townsend’s cross with a header in the 26th-minute.

READ: Everton the only ones laughing at £85m for Richarlison now…

Everton were then awarded a controversial penalty in the 40th-minute after the ball seemed to strike Joel Ward’s arm. After consulting VAR, the referee gave the decision Everton’s way.

Brazilian talisman Richarlison stepped up and converted the spot kick confidently, helping to give Everton all three points.

The Toffees remain at the top of the Premier League table after three games.

Speaking after the match, Ancelotti told BT Sport (via BBC): “Really pleased for the result, the first half was good, second half more difficult because Crystal Palace put a lot of pressure on us. We defended well but we could play better with the ball.

“It is good to see the spirit in the team in this moment. We have started the season well.

“We have to look only for the momentum, that is good in this moment. In a busy time with another game on Wednesday, we have to keep the motivation, ambition and we are doing really well.

“The danger is behind us all the time when we do not behave properly.”

When asked about the controversial penalty decision, Ancelotti said: “I am not the right person to judge the decision of the referee. It is not only one referee that decides and we have to adapt to the new rules on the handball. It is difficult, but we cannot do nothing.”

Everton will play West Ham next in the Carabao Cup on Wednesday. Meanwhile, Crystal Palace’s next fixture is in the Premier League against Chelsea on Saturday 3rd October.