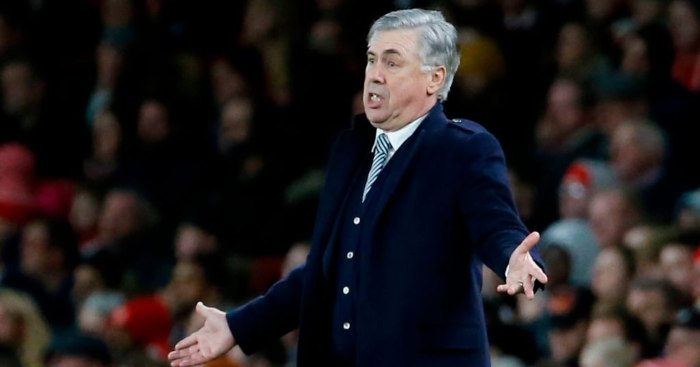 Carlo Ancelotti bemoaned Everton’s defending as they lost 3-2 to Arsenal in a “good performance” on Sunday.

The visitors led inside 49 seconds as Dominic Calvert-Lewin’s effort became the quickest home goal ever conceded by Arsenal in the Premier League.

But Eddie Nketiah would level for the Gunners before Aubameyang struck either side of a Richarlison goal to hand Arsenal the win and their first back-to-back league victories since the opening two games of the campaign.

Ancelotti told Sky Sports: “It was a good performance – a lot of opportunities. Defensively really poor. Conceding three goals like this, normally you lose the game.

“We were able to equalise at the end of the first half. We knew they played Thursday and they could lose energy at the end, but we were 3-2 down. The key points is we conceded three goals too easily.

“In the first half we played really well. When Andre Gomes came in the team improved a lot. Offensively we were really good but defensively no.

“I’ve seen Andre Gomes in training – he trained without problem. He will start the next game.

“We are going in the right direction but you have to learn. The fact we were not focused defensively we go home without points.”