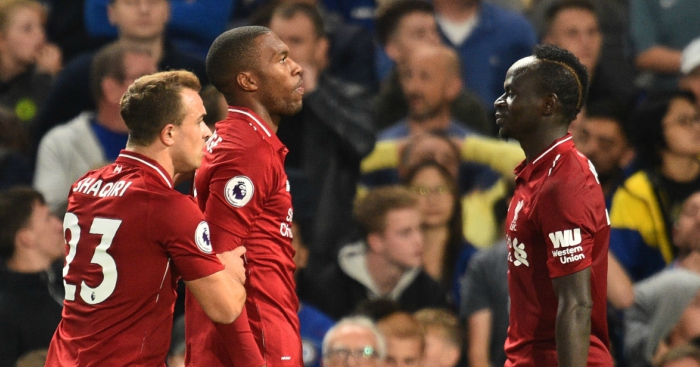 Liverpool are second in the Premier League table after seven games, level on points with Manchester City after a 1-1 draw with Chelsea ended their 100 per cent record.

Daniel Sturridge, Liverpool’s excellent Plan B, rescued a point from that game with a sublime late strike just minutes after coming off the bench.

Xherdan Shaqiri was also introduced as Liverpool chased a result in the second half, and the Swiss missed a gilt-edged opportunity of his own.

Naby Keita was the first of the three substitutes, proving Liverpool’s immense strength in depth, but Carragher was full of praise for Shaqiri and Sturridge.

“I had maybe written Daniel Sturridge off too early in terms of his Liverpool career,” Carragher told Monday Night Football.

“Going to West Brom was a big turning point for him and I think he’s come back realising he’s happy to be a squad player at Liverpool.

“It’s really difficult for managers to get quality back-up for top class players. Tottenham have got a huge problem as any striker they buy knows he is sitting on the bench.

“Any attacking player Liverpool buy know they are sitting on the bench because the front three is so good.

“How do you get someone who has enough quality when you actually need him who is happy to sit on the bench?

“In Shaqiri and Sturridge, Liverpool have the perfect example of what you need, who are quality and are good enough but are happy with their position in the club and don’t cause the manager any problems.

“We said at the start of the season that Liverpool appear to have the squad now.

“Jurgen Klopp brought Shaqiri on at the weekend and he should have got Liverpool back into the game.

“Then Sturridge came on and got the goal. We know their front three get a lot of goals but their midfield three don’t, so the back-up players have to get goals and that’s what they’re doing.”