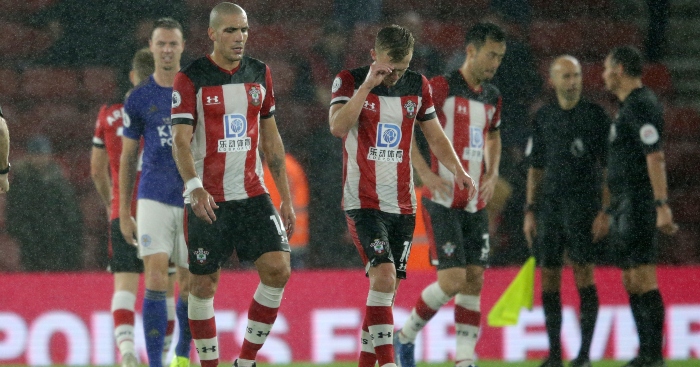 Jamie Carragher described Southampton’s performance against Leicester as “absolutely disgraceful” after the Foxes ran out 9-0 winners in a remarkable Premier League clash at St Mary’s.

The result was a new record for a top-flight away win in England, with Ayoze Perez and Jamie Vardy scoring hat-tricks after the home side had Ryan Bertrand dismissed early on.

Former Liverpool and England defender Carragher said afterwards: “Some of those players were a disgrace.

“It was an absolutely disgraceful performance that will reverberate around the Premier League.”

Fellow pundit Gary Neville added on Sky Sports: “Some teams have a lot more resilience and cope better with losing a man – but they looked so fragile.

“The young players – it’s really difficult, we don’t need to identify them – will need taking out (of the team) after really poor mistakes.”

Ralph Hasenhuttl, who took ‘100 per cent responsibility’, takes his Saints to Manchester City in their next two fixtures – in the Carabao Cup on Tuesday and the Premier League on Saturday.

Neville continued: “They can’t afford something else like that. Their confidence will be absolutely shot and to play against the best attacking team in the world…you fear for them going there.

“If they get beaten 4-0, they’ll be happy. They won’t be going there in any way thinking they can get a result.

“You feel for them when the stadium’s empty. The fans here, I always thought they’d stay with the team, but they were booing them at half-time and at the end. Most had left, we must have had five or six thousand in at the end. That’ll be a real worry.”

Neville, who had an unsuccessful spell as manager of Spanish top-flight club Valencia in 2015 and 2016, which included a 7-0 loss at Barcelona, added: “We had a really poor defeat in Spain and it was tough to recover mentally. What do you say…let’s go again lads? Give them a couple of days away.”