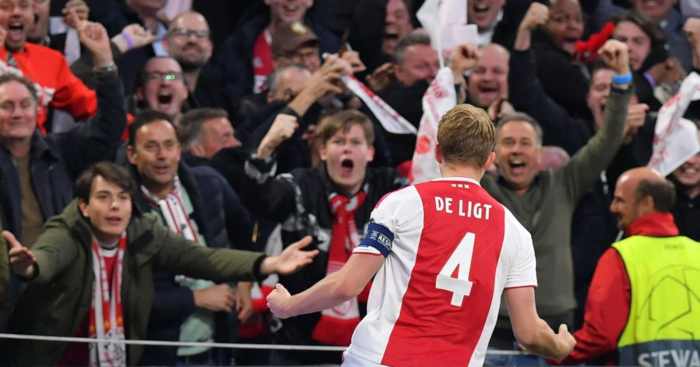 De Ligt’s recent form and his prominence in Ajax’s run to the Champions League semi-finals has caught the attention of Bayern Munich, Manchester United and Liverpool.

Barcelona were reported to have struck a deal with De Ligt’s representative Mino Raiola in March over terms for the Holland centre-back to move to the Nou Camp in the summer.

However, ESPN claimed on Tuesday that Raiola is trying to bring Barcelona back to the negotiating table over a deal with more clubs now understood to be interested.

“I have never seen such a good defender at 19 years old,” Carragher said. “He plays as if he’s 29 and at his peak already. You can only imagine how good he will be when he actually is 29.”

When asked if he would like to see De Ligt sign for Liverpool, Carragher added: “I’d love that.”

However, another former Liverpool player Steve Nicol doesn’t think Jurgen Klopp will sign the defender and our very own Seb Stafford-Bloor reckons the Reds should give the summer transfer market a swerve altogether.

“If Liverpool’s got a wish list, then this guy would be on it,” Nicol said of De Ligt on ESPN.

“No question he is the up and coming young centre-back in world football.

“He’s only 19 years old but already he has a maturity and a class about him that belies being 19.

“So for Liverpool, would this guy fit?

“Can you imagine him sat beside Van Dijk? I certainly can envision it.

“However, I’m not quite so sure that Liverpool would turn round and spent the type of money that it would cost for this guy.

“The fact that they have Gomez, they’re probably looking at him as the future.

“So unfortunately I don’t think he’s going to go to Liverpool.

“But my goodness I would love to have him there.”