Home Liverpool Carra: PSG players should be embarrassed to see their wives 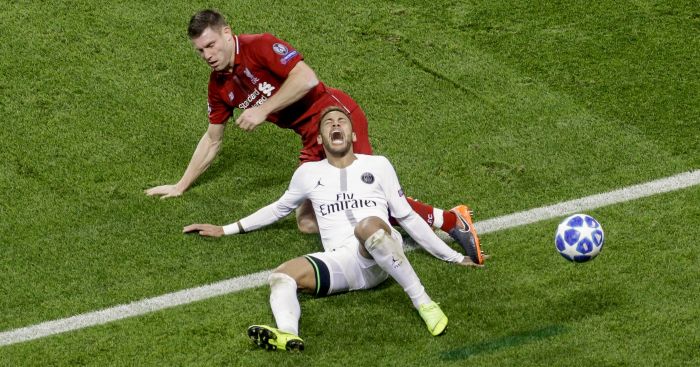 Jamie Carragher has compared PSG players to “children at kindergarten” following their 2-1 victory over Liverpool on Wednesday night.

The Reds boss Jurgen Klopp was unhappy with the hosts’ play-acting and highlighted Neymar’s role as the Ligue 1 club consigned Liverpool to a third away defeat in Group C.

Six Liverpool players were booked and only two for PSG, although there was an argument midfielder Marco Verratti could have been sent off for an over-the-top challenge on Joe Gomez, and Klopp said it made his team look like aggressors.

And Carragher backed up Klopp after the match, by saying he isn’t sure how the PSG players can face their wives after their “rolling around”.

“It was very frustrating, I think with Neymar even in the first half,” Carragher told Viasport Fotball. “We are talking about one of the best players in the world, but watching him tonight was embarrassing.

“If he continues that through his whole career, he’ll be remembered for that and not the great player that he is. It leaves a sour taste in the mouth.

“I have no sympathy for the PSG players, if Klopp is frustrated with them that’s understandable. I mean even Thiago Silva, a centre-back, was rolling around in the corner, holding his face.

“This is a great PSG team with some great players, they don’t need to resort to these tactics, they should let the football do the talking.

“You’re frustrated as a Liverpool supporter. [The PSG players] should be embarrassed. I don’t know how they go back and speak to the families and wives in the players lounge.

“Rolling around on the floor like that. The only time you see that is children at kindergarten.”

.@Carra23: – [The PSG players] should be embarrassed. I don't know how they go back and speak to the families and wives in the players lounge.#ViasportFotball pic.twitter.com/UeglHJWsxv