Home All The News Carragher: Alexander-Arnold could be Liverpool’s De Bruyne 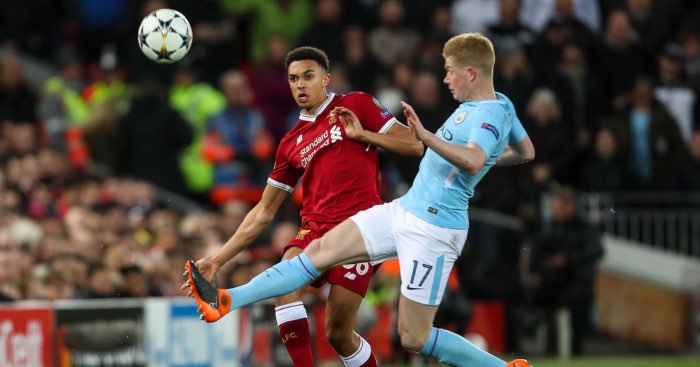 The 20-year-old is one of the hottest talents in world football and is a key player in Jurgen Klopp’s system at Liverpool.

Alexander-Arnold has already scored once and assisted three times this season after recording 16 assists in the previous campaign from right-back.

He put the ball on a plate for Andy Robertson to rifle home Liverpool’s second in their Champions League victory over Salzburg on Wednesday night.

Carragher believes Alexander-Arnold is one of “the best young players in the world” and thinks he could be utilised in a midfield role to make the most of his vision and passing range.

“I saw him the Liverpool Academy and my son started there and was four, five years younger than him and Liverpool knew then they had a really good player,” Carragher told Norwegian TV before the match at Anfield.

.@Carra23: – Trent Alexander-Arnold is probably one of the best young players in the world.

“He’s probably one of the best young players in the world if you think about what he has done.

“If you talk about (Kylian) Mbappe and he’s won the World Cup, but as a defender and playing at this level and how important he is to the team, he is possibly the most creative player in the team from right full-back.

“He has a lot of responsibility at a young age and he’s not going to be a superstar, he is a superstar.

“His strengths are that he can handle the ball and he is the most creative player in the team, just look at his assists.

“People talk about the future and could he come into midfield and be a Kevin De Bruyne type player and he has more quality now than Liverpool’s midfield players and you think about the crosses that De Bruyne puts in from the right midfield position and maybe that’s a position where Trent could play.

“But at the moment you wouldn’t think about moving position because he is playing so well.

“Defensively at times he can be suspect and the opposition mayve think they can get at Liverpool there because he pushes forward so much.

“His positional player and focus needs to be 100% focused, but he’s probably thinking ‘I’ve got Van Dijk next to me so I’ll be ok’.”