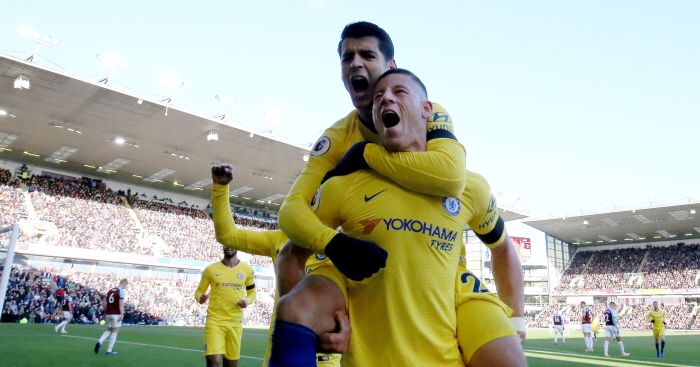 Jamie Carragher thinks Chelsea midfielder Ross Barkley will become “a must” in the England set-up if he keeps improving mentally.

The ex-Everton youngster seems to have matured as a footballer over the past 12 months with improved performances this campaign for the Blues.

Barkley scored Chelsea’s second goal in a convincing 4-0 win at Burnley over the weekend to take his tally to three goals and three assists in the Premier League so far this term.

Dele Alli and Jesse Lingard had been ahead of him in the national team in the lead up to the 2018 World Cup but Carragher thinks it could be Barkley’s time to overtake them under Gareth Southgate.

“The stats show a difference. The big one is dribbles. We all love to see players dribble but football is a passing game and maybe two or three times a game you have the chance to go on a dribble,” Carragher said on Sky Sports.

“It can’t be five times a game, and I think that was where he was losing the ball at Everton. Now he is making better decisions.

“Also look at the distance covered, I think he’s fitter, stronger and maybe that is something to do with what we are seeing now at Chelsea.

“He was really good for Everton but towards the end of his time there his decision-making wasn’t great. He dribbled when he should have passed, he passed when he should have dribbled, and the crowd got on his back and he found it difficult at times. Maybe it was the pressure of being the main man at Everton to create something.

“This lad has got to become mentally stronger, but in terms of ability, you think of the players who played in that position in the World Cup – Dele Alli and Jesse Lingard – and maybe you could argue they are better mentally but they are not better ability wise.

“If he becomes better mentally – as you would expect playing for a big team and achieving big things – I think he could become a must for the England team.”