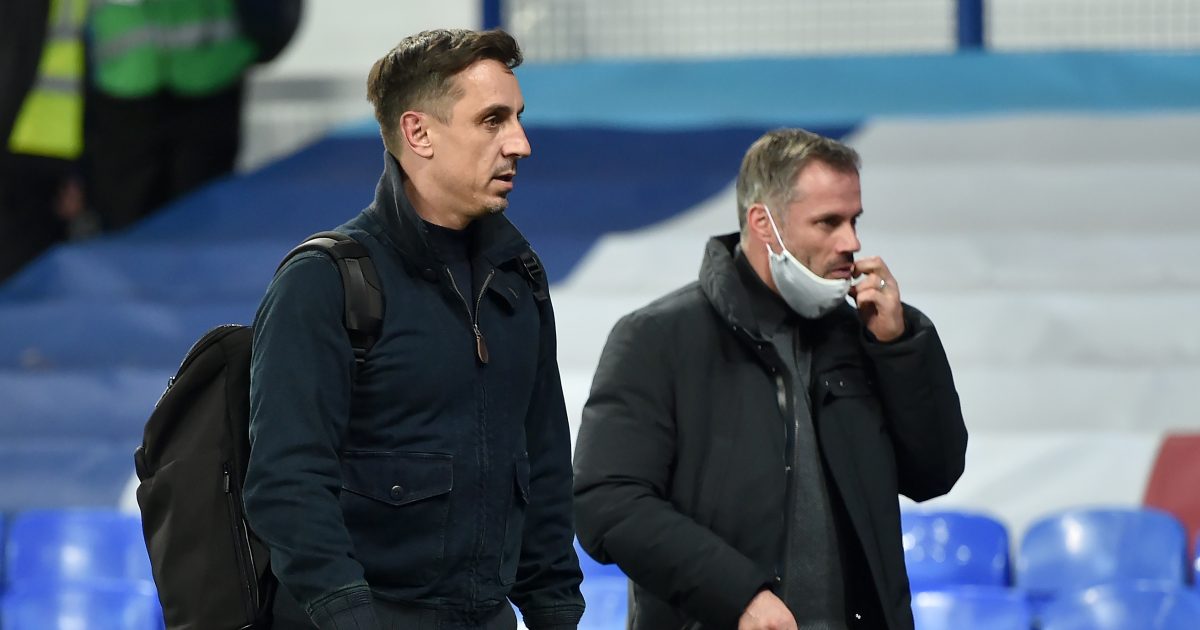 Jamie Carragher has claimed that Gary Neville has got “carried away” with his praise for Cristiano Ronaldo, with the ex-Man Utd defender suggesting that he is the “greatest football player” ever.

The Portuguese forward re-joined Manchester United this summer from Juventus. He made his second debut for the Red Devils against Newcastle United over the weekend.

Ronaldo was influential as he netted a brace as his side beat the Magpies 4-1 at Old Trafford.

This is England and it’s ripe for Ronaldo nostalgia

Neville and Carragher have been discussing Ronaldo’s return on Monday Night Football. This exchange has been cited by The Daily Mail.

Neville began by revealing that he sees the Man Utd star as “the greatest football player” ever. He also suggested that he would pick Ronaldo over Messi to win him a game off the bench:

“I’ve always ignored the Ronaldo and Messi question, it’s a bit of a fantasy and both need to be enjoyed.

“I was asked this morning by a gentleman who was driving me in: If you could pick any player in history to come off the bench and win you a game, who would it be?

“It would absolutely be Cristiano Ronaldo. I do think he’s the greatest football player that has ever lived. That is not a bias.

“Messi is a ridiculous player who’s scored an obscene amount of goals. It’s incredibly similar (on the stats) apart from the wrong-footed goals, the headers, and the penalties.

“That takes me to a point whereby he’s more complete in terms of the most important part of the game. What tips me is the international record, the most goals of all-time, and the five Champions Leagues with worse teams than Messi’s.”

Carragher disagreed with his Sky Sports counterpart. He believes that it is “ridiculous” to say that Ronaldo is better off the bench than Messi:

“Ronaldo is not the greatest player of all time. I’m going to say it’s his mate here (Messi),” Carragher said.

“It doesn’t matter how a ball goes in the net, Messi has more goals than Ronaldo. Messi is also a playmaker, he can run a game, Ronaldo can’t do that.

“Ronaldo does things other players can do, Messi does things we’ve never seen before. In terms of the goalscoring that’s not right.

“There’s been a lot of fanfare about Ronaldo from ex-players, I just think you’ve just got carried away.”