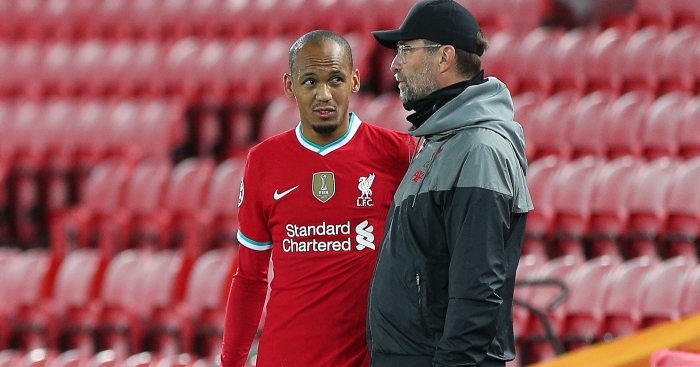 Jamie Carragher has explained the slight “difference” in how Liverpool defend without Virgil van Dijk.

The Reds have been without Van Dijk since the centre-half suffered a knee injury that is likely to rule him out for the season against Everton in October.

But Liverpool have conceded just three goals in the seven games the Dutchman has missed, keeping an impressive clean sheet against Leicester last weekend.

READ MORE: Liverpool, Klopp have ‘no intention’ of signing centre-back

Fabinho returned to central defence and combined with Joel Matip to keep Jamie Vardy quiet at Anfield, with Carragher identifying a subtle change to their approach in “body position”.

“It’s an outstanding job from the players who have actually come in,” Carragher told Sky Sports.

“When Liverpool went out [against Leicester], people said they would completely change. That they would drop off 10 or 15 yards. I watch a lot of Liverpool’s games and I didn’t quite see it.

“I’ve analysed how they played against Vardy and no one can tell me Liverpool dropped off 10 or 15 yards without Van Dijk. They were still playing a high line, but the difference is the body position the likes of Fabinho adopted.

“Yes, we can talk about him being a midfield player in there, but he’s been outstanding. What he did was play a high line but be ready to run back when the ball went over his head. He ran back and dealt with it.

“When we talk about Van Dijk, let’s not forget he’s been part of a back four for the last couple of years that have had the best defensive record in the league, and I’m sure that would’ve been the case this season with him.

“But there was no doubt Liverpool had huge problems at the start of the season. They conceded three at home against Leeds and then there was obviously the game against Aston Villa.

“We have spoken a lot on Monday Night Football about Liverpool’s line and it’s difficult at times to criticise a team that have a great defensive record and have been so successful.

“There were times when I’d look at the line and think ‘run back’. Certainly, in the Aston Villa game, where obviously Liverpool got it massively wrong.

“At times it was not so much about how high the line was, it was just the fact that I always felt that Liverpool’s defenders needed to be in a position to actually run back. ‘Just run back and match the run. We’re in a decent line, okay they have beat the press and have time on the ball, let’s just give ourselves two or three yards.’ That’s all it was.”