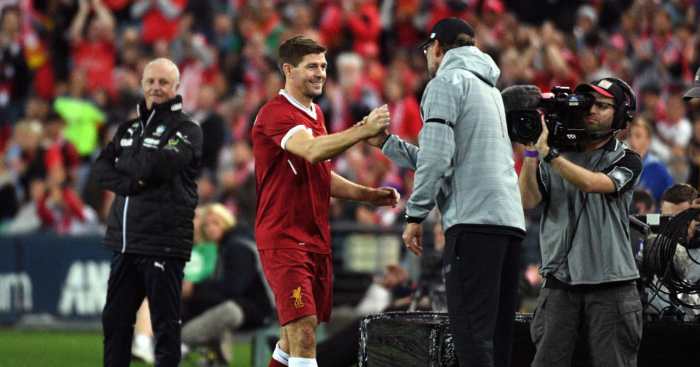 Jamie Carragher thinks Steven Gerrard will be “in the reckoning” for the Liverpool job when Jurgen Klopp eventually leaves the club.

There is no suggestion that Klopp will be leaving anytime soon but, with Rangers doing so well in Scotland, there have been whispers that Gerrard should be the first in line to his throne.

And Carragher says that if he does eventually take over from Klopp at Liverpool then Gerrard will be there because of what he has achieved and not because of his name.

“With managers it’s all about timing, really,” Carragher said. “Who knows when Jurgen Klopp is going to go?

“Stevie could be having a difficult time here, he could be somewhere else or he could be absolutely flying at Rangers and people are thinking he’s made for the Liverpool job.

“Stevie will be in the reckoning because he is Steven Gerrard. But more importantly, because he is doing really well as a manager.

“There’s no doubt that the more experiences he has will enhance him in his managerial career, but there’s nothing to say he couldn’t go straight from Rangers to Liverpool.

“I can assure you now, however, that Steven Gerrard’s focus is on trying to stop Celtic winning nine in a row and on being successful at Ibrox.”

Carragher added: “He wouldn’t take short-cuts. He’s a massive name and a lot of people in his position might think they don’t need to do coaching courses or whatever. But he does it properly.

“He just has that stature. He is Steven Gerrard. When he walks into a room, you feel that presence.”