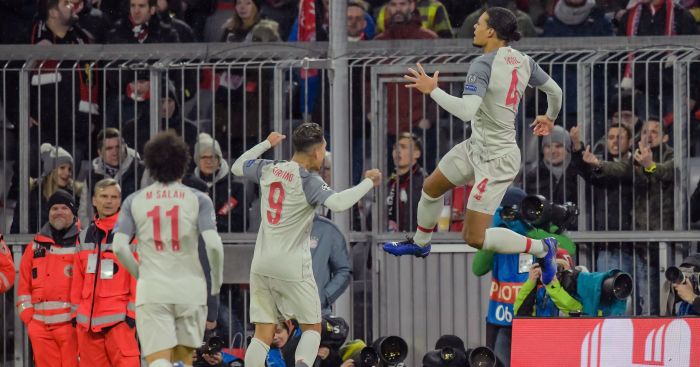 Jamie Carragher thinks Liverpool “can go all the way” and win the Champions League this season after beating Bayern Munich 3-1 in the Allianz Arena.

After a goalless first leg at Anfield, the result means the Reds will join three other Premier League sides in the quarter-finals of the Champions League.

Two goals from Sadio Mane, plus a first for the club in Europe from Virgil Van Dijk, meant the Joel Matip own-goal equaliser they conceded was rendered inconsequential.

And Carragher not only made his bold prediction but had praise for Van Dijk, a man who he thinks can lead the club to glory.

“Since he’s [Van Dijk] come in he’s been a revelation,” Carragher told Viasport Fotbal, who he was talking to alongside Van Dijk.

“I thought the performance in the second half from the man himself [Van Dijk] but certainly from the whole team was one of the great Liverpool away performances really.

“I never felt Bayern Munich were going to score. I felt yourself [Van Dijk] but also Matip, he gets the own goal in the first half – it wasn’t a mistake it’s just one of those things – I thought he was outstanding as well at the back.

“And if you can keep that going through now… I fully believe Liverpool can go all the way in this competition.”

.@VirgilvDijk: – We're in the last eight of the Champions League. We're in the title race. And it's all looking pretty positive.