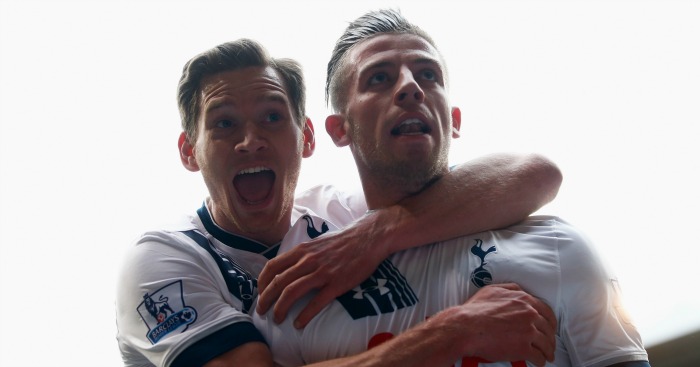 Jamie Carragher has named his Premier League XI of 2017.

Manchester City and Manchester United are level at the top of the table after seven games, but Carragher selects only one player from each side for the calendar year.

Chelsea are the most represented team (4), with Tottenham (3) and Liverpool (2) the only other clubs to have players selected.

Carragher delivered his verdicts to the Daily Telegraph.

Goalkeeper: David de Gea (Manchester United)
‘Unfortunately I am going to have to start with a Manchester United player, who I actually think is the best keeper in the world at the moment.’

Left-back: Marcos Alonso (Chelsea)
‘I think he has been outstanding in the 12 months he has been here. He has a superb defensive record with Chelsea and he scores goals.’

Centre-backs: Toby Alderweireld and Jan Vertonghen (Tottenham)
‘Alderweireld last season was the outstanding centre-back. Alongside him, Belgium team-mate Vertonghen was not far behind.’

Right-back: Cesar Azpilicueta (Chelsea)
‘His Chelsea team play a slightly different system with three at the back, but Azpilicueta has to go in there as he is one of the best defenders in the Premier League.’

Left midfield: Philippe Coutinho (Liverpool)
‘It’s a new position that he has been playing for Liverpool but he has been outstanding.’

Centre midfield: N’Golo Kante (Chelsea)
‘The defensive player in the middle. He has gone from Leicester City to Chelsea and been the most impressive player in both sides.’

Right midfield: Kevin de Bruyne (Manchester City)
‘The standout player at the start of this season. I think he is going to be a future Player of the Year contender.’

Left winger: Eden Hazard (Chelsea)
‘He has been the outstanding player in the league over the past three or four years.’

Centre-forward: Harry Kane (Tottenham)
‘We are three or four years in now and I think we will be saying the same in 10 years about him being the main striker in the Premier League.’