Home Liverpool Carragher names the one Klopp selection that ‘surprised’ him 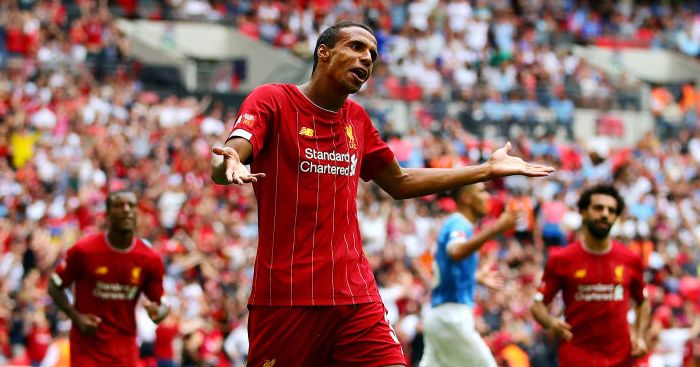 Jamie Carragher feels Joel Matip “can feel hard done by” after being benched against Norwich.

Liverpool opened their Premier League campaign with a 4-1 thrashing of promoted Norwich to prove the power of Anfield.

Despite ending last season in imperious form and starting this one with a goal in the Community Shield defeat to Manchester City, Matip was an unused substitute.

Joe Gomez was picked alongside Virgil van Dijk, with Carragher admitting he was “a little bit surprised” by the decision.

“The reason we are questioning it is because this was the team with the best defence last season and they almost looked like you couldn’t get past them with Virgil van Dijk,” he told Sky Sports.

“I was a little bit surprised that Joel Matip missed out. I do believe Joe Gomez is Liverpool’s next best centre-back behind Van Dijk but the way Matip performed at the end of last season and in the Champions League final, I think he can feel hard done by.

“It’s not just today against Norwich, and you can say maybe they have taken it easy, but you look at the Community Shield against Manchester City and also pre-season didn’t go as well as you would have liked defensively.

“I am sure when Jurgen Klopp goes through the game tomorrow, he will think they need to be tighter. Van Dijk was not happy at times with different players dropping off and pushing on.

“It wasn’t the solid backline that we saw so much last season. It will come back, but from Liverpool’s point of view, you want it to come back quickly because you don’t want to be looking like a team who starts to concede goals as that puts doubt throughout the side.”