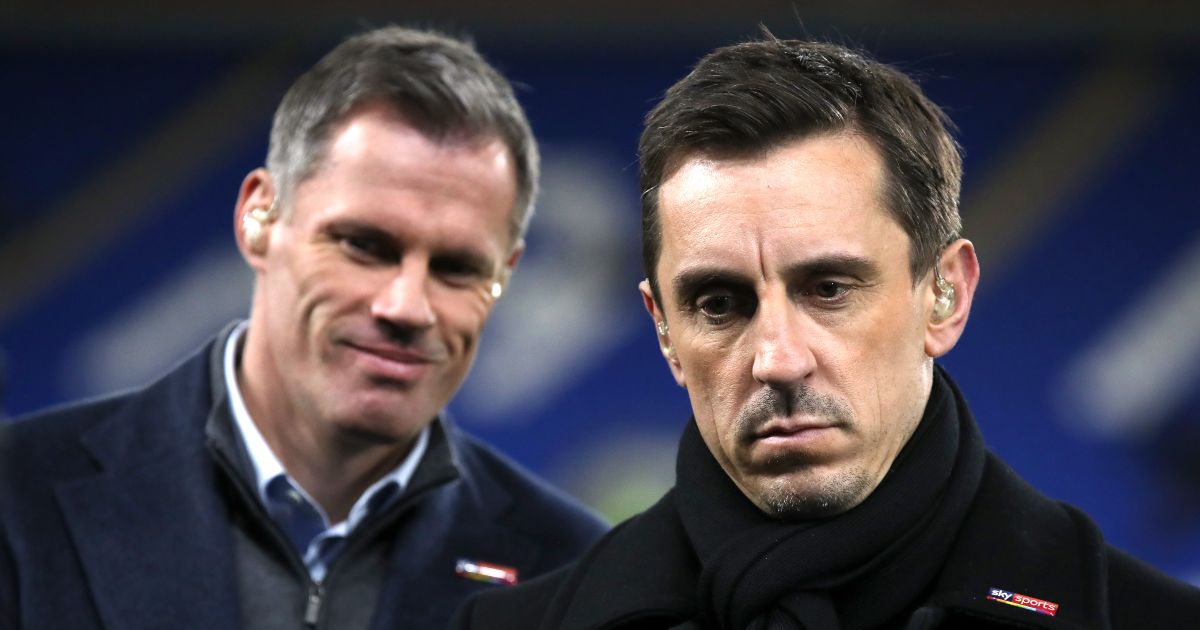 Jamie Carragher and Gary Neville have selected a combined Liverpool and Man Utd XI ahead of the weekend’s clash at Old Trafford.

The arch-rivals play each other on Sunday with second-placed Liverpool currently four points ahead of Man Utd, who sit in sixth after their 4-2 defeat to Leicester City on Saturday.

Neville and Carragher were in agreement over the selection of eight players in their combined XI with just a centre-back, central midfielder and striker causing issues.

It was Carragher’s choice of Greenwood over Ronaldo which caused the most fuss in the studio.

“How can you not put Ronaldo in, in terms of what he’s done, legendary figure? I’m talking about actually right now, today, I’d have to have Greenwood.

“[Roberto] Firmino got a hat-trick for Liverpool at the weekend and has done really well but going back last season, and this season Greenwood is a superstar and I had to find a place for him in there.”

When asked if Ronaldo would get into the Liverpool team, Carragher said: “No”.

On whether he agreed with Carragher, Neville – who included Ronaldo in his XI – said: “Obviously I disagree with that.”

Carragher added: “No, I don’t think Jurgen Klopp would pick Ronaldo if he was picking what we’re picking now.

“That’s the headline for the weekend, isn’t it! He’s going to get the winner now.”

Neville selected Liverpool duo Mo Salah and Sadio Mane alongside Ronaldo in his side and he explained his reasoning: “It wasn’t easy but just the idea he’s one of the greatest goalscorers of all time, and with Salah and Mane I thought he should be up front.

“You would have him up front. In that team, with Fabinho and [Jordan] Henderson behind, with Firmino behind and those two out wide he would be absolutely devastating.”

It was another fascinating #MNF with @DavidJonesSky, @Carra23 and @GNev2 👇https://t.co/L7SHjnabqO

On selecting Matip over Harry Maguire – who had a poor game against Leicester at the weekend – Carragher continued: “Possibly in the last 12 months or even further you could have Maguire in there [next to Virgil van Dijk].

“I’m a huge Harry Maguire fan, he’s a really good player, it’s got nothing to do with his performance at the weekend [at Leicester] – but I actually think Matip has possibly been better than Virgil van Dijk this season.

“He’s a player that goes under the radar because he’s not a huge name, he came in on a free transfer, he’s been there a long time under Jurgen Klopp, he’s had injury problems.

“But every time he plays he’s top class, he really is and that partnership with Virgil van Dijk is really good at the minute, it is.

“The performances he’s given, certainly in the last 18 months, he was the centre-back who played in the Champions League final for Liverpool.

“He’s played in so many big games, this season he’s almost been an ever-present, he’s been fantastic.”