Home All The News Carragher, Neville predict who will finish in PL top four 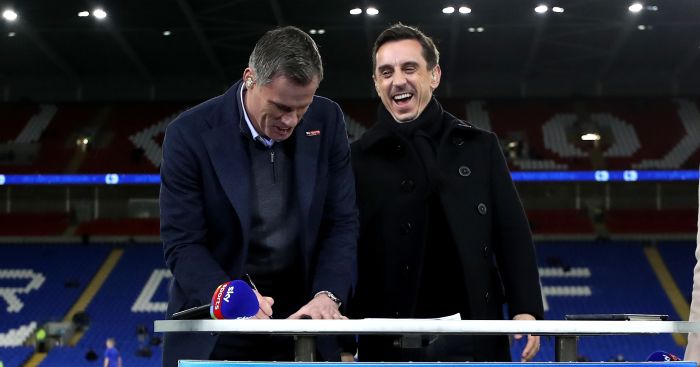 Chelsea, Spurs, Arsenal and United are all battling it to secure the final two Champions League places with Manchester City and Liverpool vying for the Premier League title.

Currently, five points separates the Red Devils in sixth with Chelsea in third, although Maurizio Sarri’s side have played a game more than the other three sides as they beat West Ham 1-0 on Monday.

And, speaking on Sky Sports’ Monday Night Football programme, Carragher and Neville agreed that Tottenham and United would make the top four.

😩 "Arsenal have four away games and they are shocking away from home…"@GNev2 and @Carra23 look at the race for the top four and predict who will make it.

“If you look at the fixtures, I look at Tottenham’s fixtures, I have to say that’s obviously the one [vs Manchester City] that stands out, but if you look at Arsenal’s fixtures you’d say they have the best run-in as they don’t play against any of the top teams,” Neville said.

“The problem they have got is that they have four away games Arsenal and they’re shocking away from home. Chelsea have got United and Liverpool away, they’re two tough games at the end of the season, I would with United put Everton in there as a tough game, City and Chelsea.

“You’ve got the added complication of Europe as well, massive European games for these teams, you could not pick them. For the moment I think Tottenham will finish third because they have the four home games and they’re the ones I think that can accumulate the points and if I look at United specifically… Ole himself said before the Wolves game that they’d need about 15 points to get into the top four, that game has fallen away now, but you look at the rest of their matches and there’s six there, they have to win five of them.

“If United are going to get 15 points from the rest of those games they’re going to have to go soon. They’ve got win big matches and that’s going to be a challenge.”

“Yes they’re not against the top six but they’re those difficult ones, very similar to Everton. Really I haven’t got a clue out of the other three because in some ways you can’t trust them – I feel like I can trust Tottenham a little bit. I know they’ve been on a bad run, it’s very tight…

“If I had to call one I would go with Manchester United.”

Neville added: “I’ll agree with him!”