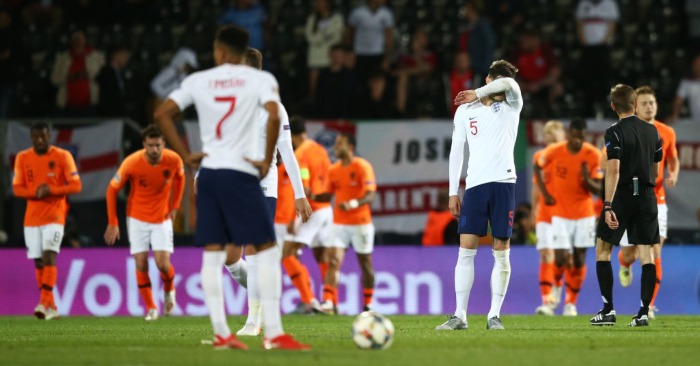 Jamie Carragher has described John Stones’ error against the Netherlands as “stupid” four times over.

The former Liverpool and England centre-half said it was not the fault of Gareth Southgate’s more expansive system that Stones made a mistake that basically lost them their UEFA Nations League semi-final.

We castigated Stones while his manager praised his “courageousness”; Carragher sided with us and placed the blame entirely on the player.

Stones had lingered on the ball when under little pressure and then had attempted to beat Memphis Depay instead of just laying the ball back to goalkeeper Jordan Pickford.

“I don’t think we’re taking huge risks at the back,” said Carragher on Sky Sports. ”England never took risks tonight. The goals didn’t come from risks and it never came from playing out from the back, it came from stupid decisions.

“John Stones is facing his goalkeeper and he is passing it – he doesn’t have to go long. It’s stupid. That’s got nothing to do with going long. He’s made a stupid mistake and a stupid decision to turn on it and try and be clever.”

Stones had started just two Premier League games in the final two months of Manchester City’s title triumph and had also been benched for their Champions League clashes with Spurs.