Home All The News Carragher pinpoints why Liverpool, Man City ‘cannot stand each other’ 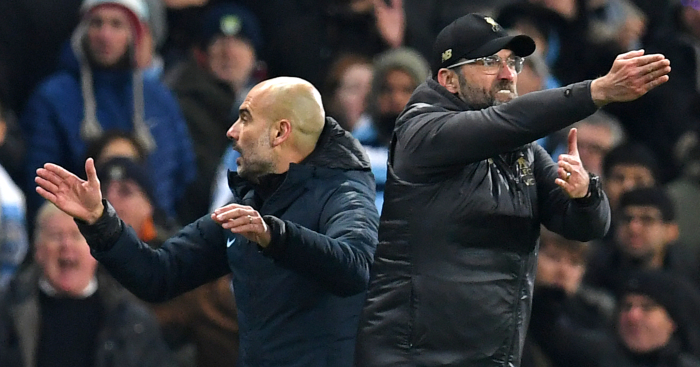 Jamie Carragher believes that Sunday’s clash between Liverpool and Manchester City at Anfield is more of a grudge match in the boardroom than on the pitch.

The rivalry between the pair has ramped up in recent years, with City pipping Liverpool to the title by a point last season, with Liverpool claiming the Champions League.

The managers have been embroiled in a war of words this week after Guardiola aimed criticism at Sadio Mane for diving, and despite Klopp insisting he has the utmost respect for Guardiola, they will both be very keen to get one over on the other.

Carragher – who is Liverpool’s second all-time appearance-maker with 737 – says the feud off the pitch is obvious.

“I do not believe I am exaggerating when I say the hierarchies of Liverpool and City cannot stand each other, resentments which are reflected in the fanbases,” he wrote in his column for The Telegraph.

“City appear to suspect Liverpool of lobbying governing bodies to investigate the legality of their transfer spending, while they make no secret of their belief that the positive coverage of the Klopp era is disproportionate when compared to Guardiola’s trophy haul, and City’s in general since the Abu Dhabi takeover.

“Within Liverpool, eyebrows are raised when stories emerge about fears of another attack on City’s bus as happened in the Champions League quarter-final in 2018, and there was incredulity at Guardiola’s comments about Sadio Mane’s diving .

“As Klopp suggested, it certainly feels like Guardiola talks about Liverpool more than Klopp does Manchester City , and City generally seem preoccupied with how Liverpool are portrayed in the media.”