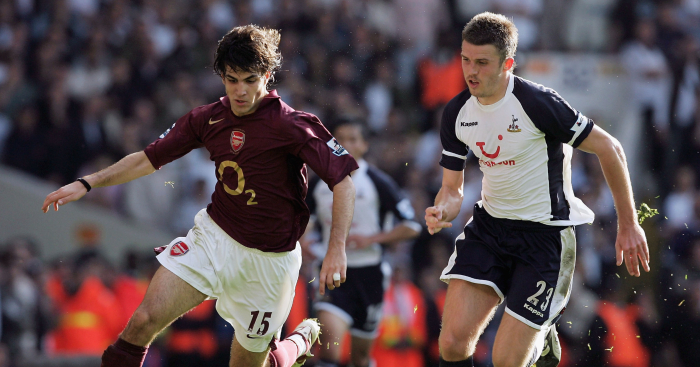 Michael Carrick was set to join Arsenal 14 years ago, only for Cesc Fabregas to “change” Arsene Wenger’s mind.

Carrick was one of England’s most highly-rated young talents at West Ham in 2004, helping them return to the Premier League after one season in the First Division.

The 34-year-old was courted by a number of leading top-flight clubs, with Everton and Portsmouth both heavily interested.

Carrick eventually joined Tottenham that summer, but had been on the brink of moving to north London rivals Arsenal before Fabregas starred in the 2004 Community Shield. Wenger would later state that he regretted never signing the England midfielder. Silly sod had the chance.

‘After a year in the First Division, I had to get back in the top flight and West Ham needed money,’ he writes in his autobiograph, as serialised by The Times. ‘West Brom and Portsmouth came in for me in the summer of 2004 and Iain Dowie tried hard to get me to Crystal Palace. I never spoke to any of them because none of it felt right. Everton were interested and I spoke to David Moyes on the phone, but that just faded away. After a few weeks, Portsmouth came back in again. Portsmouth were a solid Premiership club. Harry Redknapp was there, and so was the chief executive Peter Storrie, who I knew from West Ham. I was well into the pre-season so, with time running out, I agreed to meet Harry.

‘“I’ll get my head round it, get in the Premiership, have a good year and then see whatever,” I told David Geiss, who I have been with my whole career and is more of a family friend than an “agent”. So, we went to meet Harry and Peter at a hotel near Heathrow on August 6, 2004, a couple of days before the season started with the Community Shield. On the way, David got a call from David Dein that really threw us. Dein was the main man at Arsenal and very close to Arsène Wenger. There was nothing concrete, and we didn’t know the strength of their interest, but still, Arsenal!

‘It was just a call, sounding us out really, so we carried on, and spoke to Harry and Peter. “Come down to Portsmouth tomorrow,” Harry said. “Have a medical.” That seemed sorted, I was going to Pompey. Then, on the way home, we got another call. Arsenal again, asking us to meet Arsène. As it happened we were driving past his home in north London, so we arranged to call in on the way. Within an hour I was sitting in the front room of Arsène Wenger’s house, pinching myself. Could this really be happening? Arsenal! Could I really be on the verge of signing for the Invincibles who’d just gone through the season unbeaten?

‘Arsène Wenger was at the peak of his powers at the time, a giant of management, and it felt surreal to be there talking to him in his front room. “Tell me about yourself, Michael,” Wenger said. “What are your strengths? What are your weaknesses?” It all seemed quite formal as if I was undergoing a job interview with the civil service. It was quite a contrast to the relaxed chat I’d just had with Harry. “All right, OK,” I began, and just outlined my strengths. I felt self-conscious talking about them as I’m not into bigging myself up and I didn’t want to come across as arrogant. I understood why he asked me, though, as he wanted to get to know my character.

‘We talked for almost an hour about football. Wenger had the Community Shield at the weekend but was spending an hour with me, so surely he had to be interested in signing me? “Let’s get Cardiff out the way, and we’ll see you Monday,” Wenger said as we left. Things were moving so fast I needed a few minutes to put it all into perspective. That night, I sat at the bottom of my bed and talked it through with Lisa, just running all the possibilities through my mind. It came from nowhere. My head was spinning. Arsenal were finishing either first or second in the Premiership. Lisa knows I’m not a big talker and tend to keep things to myself and find a way to deal with it. This was different.

‘I almost felt guilty over how calmly Harry took it. He knew the attraction of Arsenal. Arriving at Chadwell Heath on the Saturday, I was thrilled to hear that Dein and Terry Brown had already spoken about a fee. Wow! I was moving from the First Division to a team in the Champions League. I’d heard [Patrick] Vieira was leaving Arsenal and that opened up a space in midfield, so it seemed nailed on that Monday morning I’d be an Arsenal player. I went out training and it was good because my brother Graeme was there at the time, and Rich [Richard Garcia] threw me a red bib, just messing about. “Red? Very funny!” Rich knew about Arsenal’s interest.

‘On the Sunday, I settled down at home in Theydon Bois, Epping, to watch Arsenal, my team to be, in the Community Shield against Manchester United. I saw that a kid, Cesc Fàbregas, only 17, started in Vieira’s place. Fàbregas played a blinder but I didn’t think too much about the significance. I sat at home on Sunday night waiting for the call to arrange details of the next day. Arsenal! I couldn’t wait.

‘But I waited, and waited, and that call never came. The next day, I had to go into training at West Ham instead and, on the way, David phoned to say he’d had a call from Dein. David relayed the gist of his message, like, “I’m sorry, the manager says we don’t need Michael. Fàbregas is coming through like he is. Sorry, the deal’s off.” Fàbregas’s performance changed Wenger’s mind about needing me.

‘I was totally devastated as I had my heart set on Arsenal and playing with all that talent. My head was gone. Arsenal had swayed me and I didn’t have a clue what I’d do now.’

Then he joined Tottenham and carried on being really good. The end.