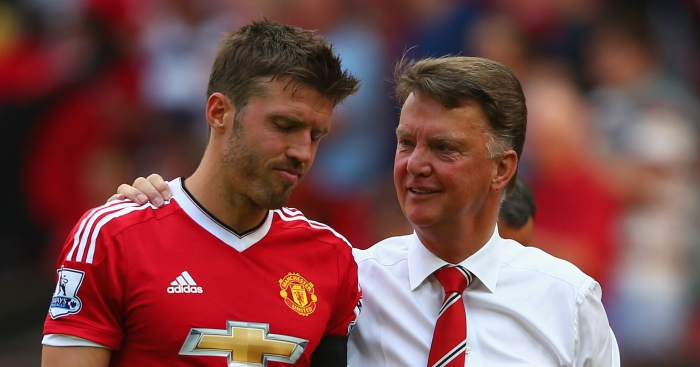 Van Gaal was in charge at United for just two years, taking over from David Moyes in summer 2014, before being replaced by Jose Mourinho in 2016.

United finished fourth and fifth under the Dutchman, winning the FA Cup in his final game.

His reign is not remembered quite so fondly due to the rather dull style he relied upon, but Van Gaal did at least secure memorable victories over United’s biggest rivals.

In his autobiography, serialised by The Times, Carrick recalls a period in Van Gaal’s first season when United beat Tottenham, Liverpool and Manchester City over the course of three-and-a-half weeks.

‘Louis van Gaal taught me another way of football, especially how to set up the team defensively, how to squeeze the pitch and suffocate a team. He went into so much detail and was so particular that we were difficult to play against when we got it right,’ the current United coach writes.

‘The period when it looked like we were making strong progress was in March-April 2015. We played Spurs, Liverpool and City and beat them all comfortably. When we went to Anfield, Brendan Rodgers had Liverpool playing a box in midfield, with Adam Lallana and Philippe Coutinho coming in off the sides.

‘To combat that, Louis told me to play midfield when we got the ball and centre half when we didn’t, dropping between Chris Smalling and Phil Jones so we’d always have this overload. It allowed one of them to push all the way in on their side and I just dropped a little deeper, which saved me from running from one side to the other. I moved up and back instead of across the pitch.

‘We tried it in a practice match at Carrington against Giggsy’s side. Giggsy always took the opposition the day before the game, 11 v 11, and we were all over the place. Giggsy’s players kept getting through. I remember saying to Chris and Phil, “Oh, we’re getting pulled all over the place here.” Louis walked past me with a smile on his face, going, “I’ve made it easy for you tomorrow!” “What do you mean?” “I’ve made it easy. Look, Chris there, Phil there. You don’t have to do anything. You have them all around you. Just read it.”

‘Louis showed me my position between them, creating the overload, and supposedly blocking out the space that Liverpool could use. In the end, it was the best performance I’ve seen from us at Anfield by a mile. All of Louis’s details stayed in my mind, like knowing when to drop back, and, yes, it worked. This was Louis at his best. Juan Mata won the game with an incredible scissor-kick.’